Three Israelis are wounded in two separate shooting attacks in Hebron on Friday. Meanwhile, Israeli undercover agents are filmed arresting and carrying away a Palestinian demonstrator in Bethlehem. 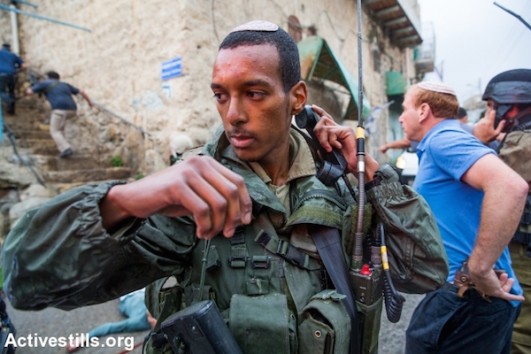 Israeli soldiers gather around the body of a Palestinian man who allegedly tried to stab a soldier at the Jewish settlement in the center of the Israeli-occupied city of Hebron, West Bank, on October 29, 2015. (Yotam Ronen/Activestills)

Violence continued to stalk the West Bank on Friday, with numerous incidents leaving several Israelis wounded, some seriously, and one Palestinian dead after she allegedly attempted a car-ramming attack. A Palestinian was also shot dead by the IDF during protests along the Gaza border fence on Friday afternoon.

Two shooting attacks in the Hebron area in the space of two hours in Hebron wounded three young Israelis. The first shooting seriously wounded a 16-year-old and moderately injured an 18-year-old, both civilians. The shooting was allegedly sniper fire that targeted Jewish worshipers as they left the Tomb of the Patriarchs/Ibrahimi Mosque.

About two hours later, with Israeli security forces amassed in the area to search for the perpetrators of the first attack, a 20-year-old Israeli soldier was shot and seriously wounded. The shooter fled the scene. The two incidents mark only the third and fourth shooting attacks to have taken place during an escalation that has been characterized by stabbing and, to a lesser extent, car-ramming attacks.

Earlier Friday afternoon, a 72-year-old woman was shot by Israeli forces after allegedly trying to ram her car into a group of IDF soldiers at Halhul Junction near Hebron. The woman, Tharwat al-Sharawi, died from her injuries in hospital shortly after.

Minutes later, an Israeli in his 40s was severely wounded after being stabbed in the Sha’ar Binyamin industrial park in the West Bank, near Ramallah. The stabber fled the scene, prompting a manhunt by Israeli security forces.

Hebron has come into focus over the last two weeks as the new hotspot in a spike in violence that originally centered around East Jerusalem. The surge in attacks in and around the city has left numerous Israelis wounded and over 20 Palestinians dead, either after allegedly carrying out attacks or after having been shot by Israeli security forces during protests.

Hebron is also considered by many to be the site of the incident that provoked the current round of heightened violence. Towards the end of September, just hours before the holidays of Yom Kippur and Eid al-Adha started, an 18-year-old Palestinian woman was shot dead by Israeli soldiers at a checkpoint in the city after setting off a metal detector.

Photos of the incident showing Hadeel al-Hashlamon standing some distance from the soldiers raised questions about the legality of the shooting, with Amnesty International branding it an “extrajudicial execution.” A subsequent IDF investigation into the shooting concluded that even though al-Hashlamon was in possession of a knife, the shooting could have been avoided — and in fact, she came to the checkpoint intending to commit suicide.

Elsewhere on Friday, Israeli undercover agents infiltrated a protest in Bethlehem and arrested a demonstrator in front of the city’s Jacir Palace hotel. A video of the event shows the agents (known in Hebrew as “mistaravim” and Arabic as “mustarabeen”), restraining the protester on the ground before picking him up and carrying him away. Other agents can be seen standing in front with their weapons raised, pointing down the street.

An armored police vehicle then moves in, firing 30 tear gas canisters in the space of about 15 seconds from a battery mounted on its roof. According to Ma’an News Agency, three Palestinians were shot with live ammunition and wounded, one critically, during the same demonstration.

At the beginning of last month, Israeli undercover agents were also filmed arresting a Palestinian demonstrator, this time between Ramallah and the settlement of Beit El. The video appeared to show them shooting the demonstrator in the leg at point blank range, despite the fact that he was unarmed.

The footage created controversy at the time, both due to the way in which the Israeli agents carried out the arrest and because many onlookers refused to believe that the video was genuine. Accusations of another “Pallywood” production did the rounds, before the IDF Spokesperson confirmed that the event had indeed taken place and had played out as the video showed.

Also on Friday, a 23-year-old Palestinian was shot dead by the IDF during protests along the Gaza border fence near Khan Younis in the southern Strip. The man, named as Salameh Moussa Abu Jame, is the latest in a string of Gazan demonstrators to have been shot and killed by Israeli troops since regular protests starting taking place along the border with Israel a few weeks ago.