The temptation of the Arab parties to unite in order to form a stronger political bloc is great. Everyone wants to give Liberman the election surprise of a lifetime. But what is the cost? 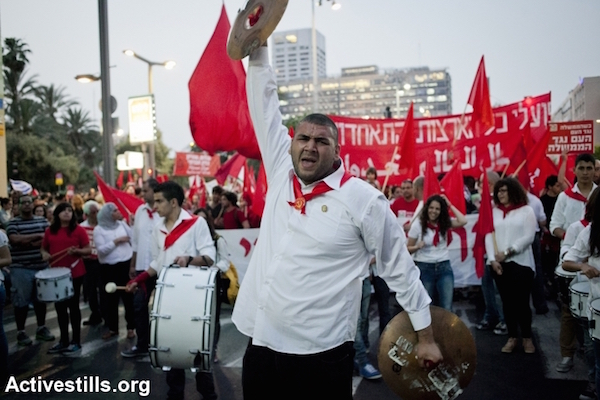 May Day demonstration, May 1, 2013, Tel Aviv. (Photo by Shiraz Grinbaum/Activestills.org)

Israel’s upcoming elections came out of nowhere. Despite the early warnings and the raising of the electoral threshold many months ago, no significant steps have been taken toward ensuring the parliamentary future of some parts of the Left and the Arab parties.

As a result, attempts to form a joint Arab list with Ra’am, Ta’al, Balad and Hadash only recently began, and any possibility of forming an alliance between Meretz and Hadash has been lost. This is how the Israeli Communist Party and Hadash woke up to the nightmare of an intense internal argument that threatens to rip apart the Arab factions as they approach the moment of decision.

This article is intended for Hadash supporters, as well as other activists in the Israeli radical left. New polls that once gave Hadash as an option now show only a “united list of Arab parties.” There is an understandable temptation to give Liberman and his ilk — who raised the election threshhold in hopes to limit Arab representation int he Knesset — the election surprise of a lifetime in the form of a united Arab party consisting of 15 seats. But I am here to talk about the price that entails.

Firstly, neither I nor my political allies hold the key for the creation of a coalition that would represent the Arab public. If anything we have the key to the one and only asset that has been created over many difficult years of fighting the occupation, racism and discrimination: Jewish-Arab socialism. And this key is manifested most consistently by Hadash.

Hadash is the one party that challenges the tribal traditions from both sides of the separation line. Although it does not carry much electoral weight, the party is very stable — and until recently was slated to receive five seats in the upcoming elections — sometimes against all odds. Because it is attentive to the needs to Jews and Arabs in this land, the party is reliable and not prone to careless exaggeration. Furthermore, the party’s messages are clear: it doesn’t blink when a war breaks out, and has had a persistent political identity in every Knesset that I can recall. It is a party that consistently carries two flags: class struggle and the Israeli-Palestinian conflict.

Those who are willing to give up on the unique qualities of Hadash for the sake of intellectual renewal or solidarity between victims of racism, are giving up on a party that refuses to belong to one ethnic group or another — the only real alternative to racism. Just as we oppose defining Israel as a “Jewish state,” so do we believe that any party that represents us must be a home to all citizens of this country.

I hope that all the parties who wish to represent the national or religious struggle in the Palestinian street unite. But this cannot come at the expense of the unique role of those who believe in Jewish-Arab cooperation.

Over the last few weeks, hundreds of Jews and Arabs have signed three different public declarations calling on their respective leaderships to find a way to bring about a united Arab list. This is just the tip of the iceberg of a positive trend that emerged this past summer in the face of the violence against anti-war activists. Hadash faces a difficult challenge: to stand up to the trend among the Arab public of uniting on the basis of ethnicity, and prove that it can pass the electoral threshold by other means. Thus it will need to find new partners that do not blur Jewish-Arab unity.

I sincerely hope that the next Knesset includes three leftist parties: Meretz, an expanded Hadash and a united Arab list. Only one of them will be loyal to the notion of cooperation, but together, the three will be able to lead in a way that no governing coalition can ignore. If Meretz decides to join the Liberman-Livni coalition, Hadash and and the Arab list will be there to give them hell.

It is very possible that the establishment of a coalition of Arab parties is a done deal. If it happens, we will find a way to renew Jewish-Arab political unity, perhaps even outside the next Knesset.

Sinai Peter is a director and theater lecturer who lives in Haifa. This article was first published on +972′s Hebrew-language sister site, Local Call. Read it in Hebrew here.

Related:
Why won’t the Arab parties just unite already?
+972 poll: Joint Arab list would raise voter participation
The Jewish-Israeli Left can participate in the Palestinian struggle, but not as a partner