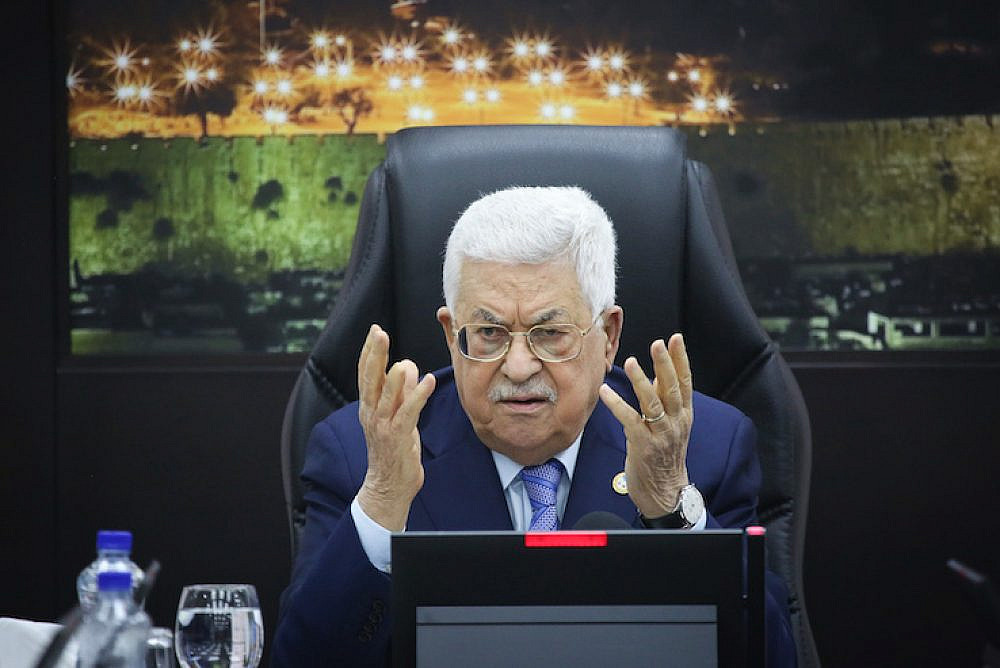 Palestinian President Mahmoud Abbas presides over a meeting of the Palestinian government in Ramallah, West Bank, on April 29, 2019. (Flash90)

It is rare in Palestinian politics that a president follows a prime minister. This is what happened this week, when Palestinian President Mahmoud Abbas echoed the words of his prime minister, Mohammad Shtayyeh, who in an interview with the New York Times last week warned of a “hot summer.”

Abbas, who has been single-handedly opposed to any changes in security coordination with Israel, all of a sudden joined Shtayyeh’s chorus line, predicting “a difficult July and August,” referring to possible layoffs of members of the Palestinian security forces if the Palestinian government’s current financial troubles are not solved by the end of the summer.

The oft-repeated justifications for Abbas’ reluctance to make changes to security coordination with Israel include the preservation of the Palestinian government — as well as self-protection. But the fact that the prime minister, who is a member of Abbas’ own Fatah movement, was ahead of him on the issue forced Abbas to take to Twitter and state that, indeed, he would lay off security personnel in order to reduce the cost of governing.

This is also meant as a message to the Israelis and the Americans, that the next few months might witness a violent escalation in the occupied territories. Gunfire broke out between Palestinian forces and the Israeli army deep in the city of Nablus Tuesday morning, which Israel is forbidden to enter — at least not without pre-coordination with its Palestinian counterparts. The message was clear: Palestinians will no longer accept Israeli incursions.

The Palestinians should not address their message to the army, however. Israeli military officials are said to be advising the political establishment to ease up on Palestinians, so as to prevent the collapse of the Palestinian government.

Abbas — who holds the position of president, chairman of the PLO, and commander in chief of the security forces — has the last word regarding Palestinian security. But he is also bound by Article 22 of the 2005 amended Basic Palestinian Law, which requires the Palestinian government to provide for prisoners and families of martyrs, many of whom were killed by Israeli soldiers and settlers.

Budget allocations to the security services in Palestine’s 2014 general budget amounted to 28 percent, or $1 billion out of $3.8 billion, according to a February 2015 Ministry of Finance report. As such, the security budget is bigger than both the education and health budgets combined.

While the size and budget of the Palestinian security force is of importance to Israel and the U.S., what is of special significance is the internal conflict within the Palestinian leadership. A series of recently-leaked documents revealing that Abbas had secretly approved requests for major retroactive pay raises to government ministers put the president in an embarrassing position. The leaks also exposed that a key minister still serving in the current PA government had received bribes, a case which Abbas has remained silent on despite documented proof. The message behind the two leaks is also clear: before you ask others to help you out financially, clean up your own financial mess and the corruption in your ranks.

The Palestinian government’s financial, security, and internal problem is further complicated by the U.S. plan to roll out its vision for managing the Israeli-Palestinian conflict over the next few months. The process is set to begin with an economic workshop in Bahrain in late June, with the possibility that a political plan be released once a new Israeli government is sworn in.

Some Palestinian leaders have not hidden their glee over the delay in the formation of an Israeli government and the decision to have new elections. They are hoping to run the clock out, as the 2020 U.S. election season is set to start mere months after Israelis head to the polls in mid-September. 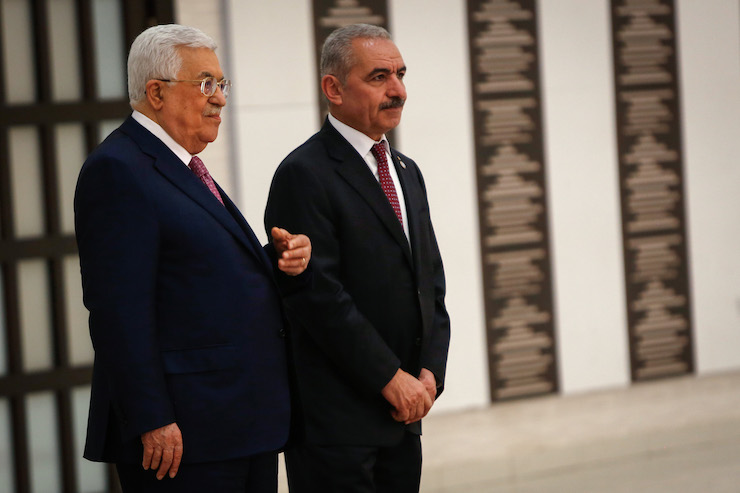 Palestinian Prime Minister Mohammad Shtayyeh (R) and President Mahmoud Abbas (L) at the swearing in ceremony of the new government at the Palestinian Authority’s headquarters in Ramallah, April 13, 2019. (Nasser Ishtayeh/Flash90)

Hani al-Masri, a political analyst and director of Masarat, the Palestinian Center for Policy Research and Strategic Studies in Ramallah, argues that the Palestinian government’s attempt to push the situation to the brink is unwise. A better alternative, he said, would be to work on unifying Palestinians since the Israelis are not going to change anything until after elections. The reduction in the monies earmarked for Palestinians is a law that the current transitional government can’t change, al-Masri added.

Of course, the elephant in the room is the future of the Palestinian presidency. The jockeying for post-Abbas leadership is already taking shape. While many names have been floating, the choice of Shtayyeh presents an opportunity for the former Birzeit University professor who helped launch peace talks during the 1991 Madrid negotiations to lay claim to replacing Abbas when that day comes. Shtayyeh has tried to carefully walk a tight rope, strengthening his own popularity by visiting refugee camps and connecting with unions, women, and student activists, while maintaining day-to-day ties with diplomats and visiting politicians.

In the absence of a major breakthrough in Egyptian-led reconciliation talks between Fatah and Hamas that would lead to possible general elections, it appears that the issue of succession might be resolved inside Fatah rather than outside it.

Oraibi Rantawi, one of the leading Arab columnists on Palestinian issues, believes that with his appointment as prime minister — and barring any major mistakes — the presidency is Shtayyeh’s to have. “He is the best that Fatah will produce, and he has the credentials both inside and outside Palestine to become the next president,” Rantawi said.

Shtayyeh’s “hot summer” comments show he is not afraid of taking on tough positions. The fact that Abbas followed him, rather than the other way around, indicates that the jockeying for succession might have moved into the prime minister’s office.

Daoud Kuttab is a Palestinian journalist. He is a former Ferris Professor of Journalism at Princeton University and currently serves as the vice chair of the International Press Institute. On Twitter: @daoudkuttab