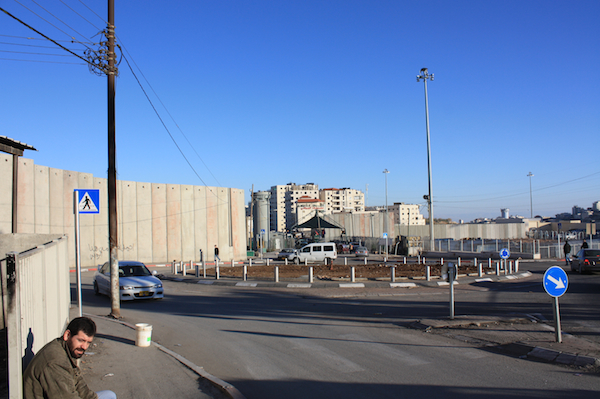 By Alexis Thiry and Markus Schlotterbeck

For the people using the brand new light rail in Jerusalem, Shuafat is just another station servicing an Arab neighborhood in the city. But Shuafuat refugee camp, stuck between the French Hill and Pisgat Ze’ev settlements (and distinct from the nearby neighborhood of the same name), is a third world community that lies just two kilometers away from the country’s most important tourist sites.

Founded in 1964 by the United Nations Relief and Works Agency (UNRWA), when East Jerusalem was still part of Jordan, the camp is now home to 11,000 registered refugees, though the actual population is likely above 18,000. After the Six-Day War in 1967, this part of the city was annexed by Israel.

Although many Palestinians obtained Israeli nationality after the 1948 war, a majority of Shuafat’s inhabitants (70 percent) are currently living under a hybrid status. They have neither Israeli citizenship nor Palestinian identity documents. They are permanent residents of Jerusalem, which means they can leave and enter the municipal boundaries of the city as they wish, but are not full citizens of Israel. The remaining 30 percent have no Israeli residency at all, and cannot cross the checkpoint. One resident explained that, because of this in-between status, some married couples move there if one spouse has Jerusalem residency and the other has a West Bank ID. Palestinians with Jerusalem residency lose their status if they live outside of the Jerusalem municipal borders, and Shuafat is the only place inside the municipality that someone with a Palestinian ID can reside.

This paradoxical legal situation has serious consequences for the day-to-day life of people living here. The Palestinian Authority does not have access to the camp, which Israeli police do not enter. There is no structure for dealing with problems, even petty crime, said one resident. Although residents and refugees pay taxes to the municipal authorities, few services are delivered there. According to a report published by the Israeli NGO Ir Amim, roads, sewage, water, street lights, garbage collection, schools, and mail are Israel’s responsibility, but are not provided. This exclusion is nearly total, following the construction of a new section of the separation wall surrounding the camp. A new checkpoint has been opened by Israel in order to exercise greater control over entry and exit from the camp. Its residents are left to fend­ for themselves because of the lawless situation inside the camp. 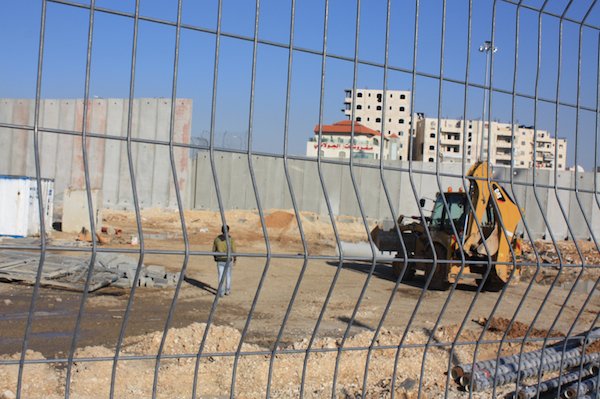 Nassri Hussein Ghanein, a local businessman who owns a phone company outside of the camp itself, but surrounded by the wall, observes that the new checkpoint did not change many things for his business. “The same rules are still in place,” he said. “However, the so-called security fence increased road congestion, and accidents are frequent when pupils come out of school at one o’clock,” he added.

Nassri mentions that the road surfaces are in a very bad condition and people suffer from a poor drainage system. “We have all the reasons to think that next winter we will face the same problem, as nobody is taking care of it.” 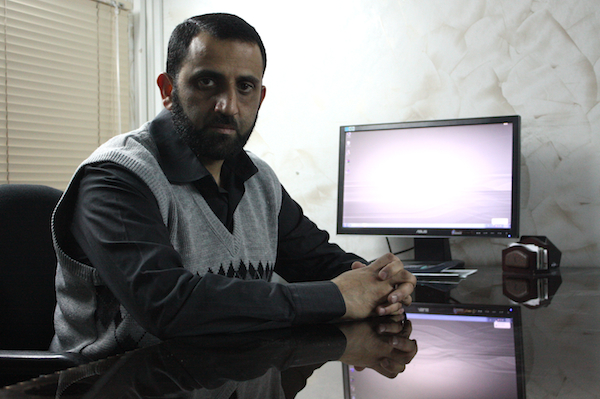 According to the UNRWA report, one major problem is overcrowding  in the camp, which leads to terrible sanitary conditions. 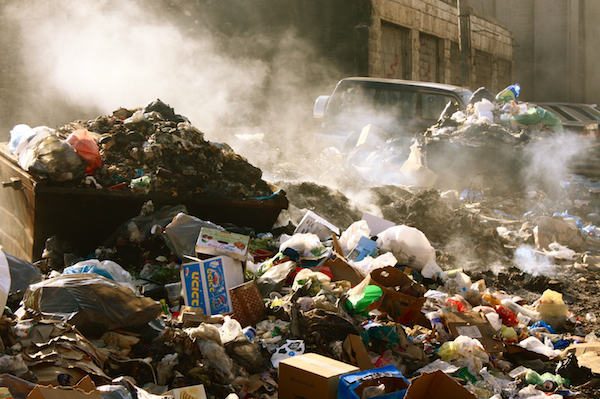 “The garbage collection is badly taken care of. Only seven or eight UN employees are collecting the trash whereas at least 15 people should be working on it,” he explained. Because of the accumulation of trash, inhabitants have no other choices but to burn it, which is a health hazard, particularly for children.

Nassri says that the six medical clinics in the camp are insufficient to deal with the health needs of 18,000 people.  Of those clinics, only one is funded by UNRWA, with the rest subsisting on private funding. People with a permanent residency Jerusalem identity card are allowed to access Israeli hospitals, but those without an entry permit have to travel to Ramallah for treatment. In these cases, ambulances cannot go to the Qalandia checkpoint leading to Ramallah directly from Shuafat. Instead, they must journey around Jerusalem to enter Ramallah from the southeast, which is a long ride. Patients who don’t have a residency permit sometimes arrive in at the hospital too late.

These concerns are shared by the owner of a décor business, Abu Mahmoud, and his employee Adel Hamad Hamed.  Both of them live in areas controlled by the Palestinian Authority but work in this annexed part of Jerusalem. On the day we visited, Abu Mahmoud was stuck at an Israeli checkpoint for four hours on the road from Ramallah, which he says is a regular occurrence.

Adel is from the village of Dura Al-Khalil, near Hebron. Every day he commutes from his village to Shuafat, and has to drive the long way around the city to avoid going into Jerusalem, where he has no entry permit. 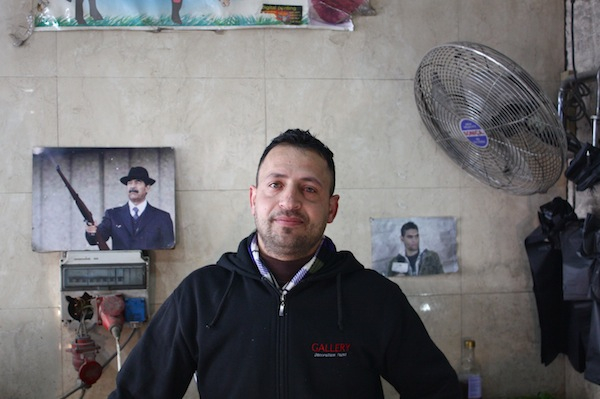 He acknowledges the difficulties of life in the camp under Israeli control, but also talks about the advantages of Israeli residency. “You can go to Jerusalem, to Tel Aviv. But I can’t go there… I want to see the sea.”

People complain about the neglect of the Israeli authorities, since they expect to receive the same services allocated to other areas of Jerusalem, but they also express that they feel part of Palestinian society. It appears that many in this community wish to be a part of areas controlled by the PA, and would like to participate in the next legislative elections.

Until the situation changes, they will remain caught in the space between the de facto borders. Residents make do and carry on, even as they are marginalized and largely forgotten.

Alexis Thiry is a French-language editor of the Palestine News Network based in Bethlehem in the West Bank. His blog is called Des Visages et des couleurs.

Markus Schlotterbeck is an organizer based in Philadelphia. Markus currently lives and volunteers in the Aida Refugee Camp in Bethlehem.