The woman who made human rights the central issue of the left’s political agenda has died at 86. Fearless and true to her values, Aloni stood up to Israel’s generals and rabbis until her very last days. 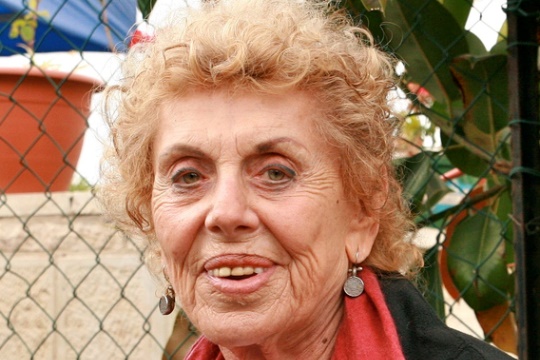 Shulamit Aloni, founder of leftist Meretz party, former minister of education and the legendary mother of the Israeli civil rights movement, died Friday at the age of 86. Aloni served 28 years in the Knesset. She was elected for the sixth Knesset with Labor, but later left the party and established Ratz, an avant-garde party focused on civil rights.

In 1984 Ratz became the political home of Peace Now, and in 1992 Aloni united the party with Shinui and Mapam, leading the left-wing bloc for an all-time record of 12 seats, which enabled the formation of the second Rabin government.

Aloni, who then became the new minister of education, was immediately targeted by the settlers and the ultra-Orthodox. She was forced to resign her post in 1993, following an ultimatum by Shas to Rabin. Aloni left the Knesset in 1996, but remained politically active, voicing her opinions on the occupation and human rights issues until her very last days.

For my generation of leftist Israelis born the seventies, Aloni was probably the central figure in our political development – the person you listened to in order to know where you stand on a certain issue. She was the standard bearer of an entire political community. Not Rabin, and certainly not Peres. Shula, as she was referred to, was the voice of our political conscience.

One cannot over emphasize her influence. The woman who almost single-handedly challenged all the powers of the Israeli establishment, from the generals to the rabbis, in the same fearless manner. Her statements often became the center of national controversies. Her own personal history – she was part of the generation that founded the state, and was a former member of the Palmach underground organization – or the fact that she possessed the biblical knowledge of a Yeshiva student, allowed her to stand her own ground against any politician or institution. She just couldn’t be bullied; since her departure from politics, the left always seemed a little more scared and apologetic.

While Aloni’s confrontations with the religious parties received most of the media attention in the eighties and nineties (Shas’ Ovadiah Yossef famously said that the day of her death should be celebrated), Aloni had a profound impact on the liberal revolution of the nineties. Before Aloni, the left in Israel was focused (like the rest of the political system) on security and diplomatic issues. Aloni brought not only a new agenda, but a new language and context to the political left – one which put women’s rights, LGBT rights and Palestinian rights as its central political issues.

Everything that followed, from the rise of human rights organizations to the ground-breaking decisions by the Supreme Court on those issues could not have happened without the work of Aloni and her colleagues.

For Aloni, human rights were never abstract or theoretical, but rather rooted in the local context of politics and history. Most important of all, she taught the Jewish left that one cannot speak on human rights without mentioning the Palestinian issue. Nothing could be further from Aloni’s legacy than the cynical attempt by Israeli governments to use the hard-fought achievements of the LGBT community as part of their propaganda against the Palestinians.

In the wonderful documentary on her life made by Anat Saragusti (see below, Hebrew only), Aloni, by then long retired, is seen going to checkpoints together with women of Machsom Watch, or sitting at her desk, trying to find out the fate of 500 uprooted Palestinian olive trees. Today, in the post-Oslo, post-Intifada period, there is a renewed understanding among the left that the occupation is a human and civil rights issue, rather than a diplomatic or security-oriented problem. That was Aloni’s legacy, too.