The Left’s instinct to petition the courts against anti-democratic laws is counterproductive and misplaced. It’s time for Israel to pay the price for its legislation.

The Knesset approved yesterday the anti-boycott law, pretty much in its original form. The list of the undertakers of Israeli democracy can be read here (Hebrew). Exceptional swinishness was expressed by MK Uri Orbach, who heckled MK Ahmed Tibi’s speech by calling “your time is over – it was over in 1948.” This particular gem was repeated by MK Carmel Shama (Lamma Ding Dong) Ha’Cohen.

A few minutes after the bill was passed into law, a small demonstration spontaneously bloomed in Rabin Square, where, ever since the eponymous prime minister was assassinated there, the Israeli left traditionally gathers to mourn each additional blow to democracy. About 100 people showed up;  some said there were 200 but I think this was an exaggeration. One of the most frequently expressed sentiments at the protest was that, yes, the law is horrible, but the Supreme Court (sitting as the High Court of Justice) will save us and strike it down. During the Knesset debate, Tibi even said Adalah and ACRI have already penned the appeal. At least as far as ACRI is concerned, this isn’t true.

I’d like to suggest that the Israeli left reconsider this idea, and overcome  its Pavlovian instinct to appeal to the HCJ against each new abomination. These petitions are problematic, for several reasons. 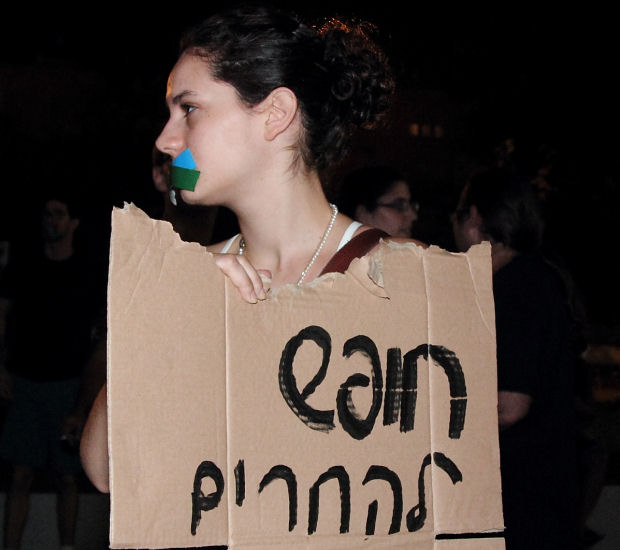 For starters, these petitions play  into the hands of the right wing. It allows right-wingers to point out, time and time again, that laws which they pass, in accordance with every formal rule of the game and with wide public support – the boycott law being no exception – are stricken down by an unelected elite. One could, of course, counter by saying that this is precisely the role of a supreme court in a democracy, but this argument requires a public familiar with more sides of democracy than majority rule, and we seem to lack that.

Furthermore, the right wing and opponents of the HCJ in general point to the fact that there is nothing in Israel’s Basic (quasi-constitutional) Laws to secure such a powerful role for the  Court, and in the absence of a constitution or a clear Basic Law granting this authority, we have a major problem. Yes, I know that precisely such a move was taken by the American Supreme Court in Jefferson’s day, but that Supreme Court  did have a constitution which declared itself superior to any law of the land, and someone had to rule what it means.

It’s no accident Israel does not have a constitution; any such document would have to deal with issue of equality. People who remember the debates surrounding the Basc Law: Human Dignity and Freedom will know that, under ultra-Orthodox pressure, the clause confirming all Israelis to be equal before the law was taken down. Twenty years later, one can say without fear of contradiction that a great majority of Israelis would reject a constitution declaring equality. Jewish and democratic? Hardly. But even the proponents of this principle put Judaism first.

The second consideration against petitioning the HCJ  is “what will the gentiles say?” A large segment of the public sees no problem with the loyalty laws per se, but is worried of the damage to the image of Israel. The HCJ, which is one of the architects of the occupation, without which it would impossible to maintain, is a classic part of this hoodwinking of the gentiles. It is the last fig leaf of the Zionist regime (and, to those who bristle at the usage of this term; ask yourself: Isn’t that how Israel describes itself?). A classic example is the HCJ ruling regarding the separation barrier: The Sharon government was bitterly hostile to it and did everything it could to avoid enforcing it – but when the International Court of Justice started debating the barrier, the government hastily waved the HCJ ruling as a way of proving it had another, better, ruling.

This fig leaf, which allows Israel to act as an intolerant ethnocracy while pretending to be the only democracy in the Middle East, must be discarded. The Boycott Law already caused some progress: Peace Now, a rather lukewarm and controversy-shy movement, has – for the first time in its history – announced support of a settlement boycott. Many people who were not aware of the issue are now very much aware of it. The settlers are used to acting stealthily; this time, they are forced to act in daylight. It’s not only the boycott which worries them: The Knesset will vote next week on the panel of inquiry of leftist organizations, a bit of legislation which seemed dead in the water just six months ago.

Going to the HCJ, which may take up to 12 years to consider the case, is putting a Band Aid on a gangrenous limb. What we need is an amputation. We should not go to the courts unless forced to – thus allowing Israel to be seen for what it is. In due time – likely, in less time than a HCJ decision – the EU will take notice of what happens in Israel and act accordingly. It already demands that Israel clearly mark settlements produce. There’s a strong chance the latest law will make them sit up and take notice. Should the EU, shall we say, demand every Israeli exporter and tourist to prove he is not enjoying the benefits of the new law, Israelis will find the party is over. And the settlers will finally pay the price of the occupation the rest of us have been bearing for them in the last 44 years. That’s what we need: The end of the legitimacy of the State of All its Jews.

And, in the meantime, we’ll politely ask Israelis to only buy products made in the State of Israel. Anything more than that, beginning this morning, is illegal.