On Friday evening, Slovenian philosopher Slavoj Zizek gave a lecture in a bookstore in Central Tel Aviv teeming with familiar faces of leftwing activists. It was hosted by Udi Aloni, an Israeli-American artist and BDS activist, who just completed a book entitled What Does a Jew Want, which is edited by Zizek. 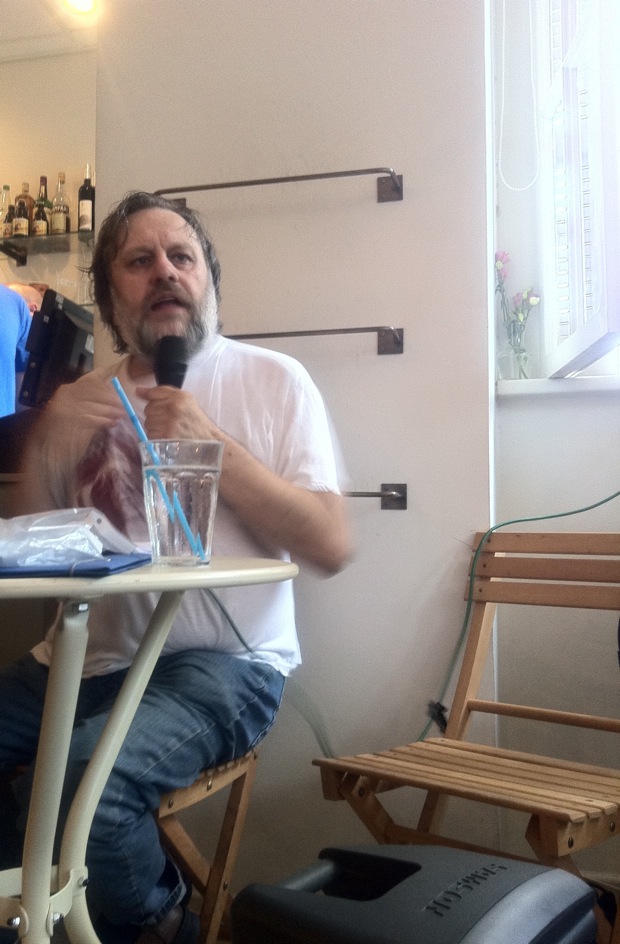 The bookstore called Tola’at Sfarim (Bookworm), which is also a small publisher of books mostly on psychology, was packed with people, young and old, very eager to hear Zizek speak, just as I was.

Many seem to have come with the expectation to hear Zizek rip into Israel and use his wry wit and charisma in such a bourgeoises Tel Aviv setting to endorse the BDS Movement. Indeed when Udi Aloni introduced Zizek, he identified himself as an activist on behalf of BDS and said he chose the bookstore as a venue in order to not cooperate with any formal Israeli institution.

However, Zizek did not officially endorse or even talk much about BDS – and when he did it was because he was prompted to during Q&A. His two clear statements about BDS were that a) he is not 100% behind it and b)he supports a movement that is initiated jointly by Palestinians and Israeli here in the region.

Rather, Zizek spent almost two hours with the crowd’s undivided attention talking about antisemitism, capitalism and the place of the Jew in the world. He warned that antisemitism is “alive and kicking” in Europe and America and asserted that the State of Israel should worry more about Christian right antisemitism  rather than wasting its energy on self-proclaimed Jewish anti-Zionists. He said that the Christian Zionists in America are inherently antisemitic and that Israel’s willingness to embrace their support is baffling.

He started his talk by saying that when he was invited to speak in Tel Aviv (most of his trip was spent in Ramallah with Udi Aloni), people reassured him there are still some “good Israelis” left that would love to hear him, as if trying to convince him of why he should bother to step foot inside Israel. Zizek said he doesn’t like this approach.

Being “Anti” Anything is Trendy

This statement set the tone for his entire talk, which was firmly framed in the notion that most people are too easily caught up in trends and sound bytes that do not actually identify the root of the problem. He talked about how easy and fashionable it is to be, for example, “anti-Capitalist” today, because you can just direct blame at a specific bank or a specific person as the evil culprit and think that you have done your part in condemning it. He mentioned Bernie Madoff in this respect, as a scapegoat who was easy to blame, when in fact the real problem is the system that allowed and even pushed Madoff to commit his crimes.

He traced antisemitism through history, from when Jews were expected to convert, to the era of Enlightenment and French Revolution, when it became clear that no conversion or amount of assimilation could do anything to change their eternal Jewishness. Jews went from being too distinct and particular to being too universal and cosmopolitan, which paved the way for the Holocaust.

After establishing the deep-rooted vitality of antisemitism, he mentioned that he has no patience for those who excuse Arab antisemitism; that even the most oppressed and poor Palestinian should not be tolerated for being antisemitic. He also spoke about his well-known argument regarding Zionist antisemitism, whereby Zionists use antisemitic language towards fellows Jews in accusing them of not being Zionist enough. This was his main critique of Israel – its witch hunt against those Jews it finds not “Zionist enough.”

Sitting in a room full of Israeli activists, some of whom consider themselves on the forefront of the fight against Israeli occupation and apartheid; who devote much of their time going out to the West Bank in solidarity with Palestinians, in confrontation with Israeli military and who favor a total boycott of the country, I could feel the disappointment in the room from certain people that Zizek was not speaking more critically and disapprovingly of Israel. He barely said the word occupation, did not mention the word apartheid even once.  He did not directly speak that much about Israel itself or what should be done.

This was a bold move with such an audience – and I’m not sure if people got it or not, but in many ways, I think that Zizek was actually levying criticism against the very activists sitting in that room. They are so caught up with the “evils” of Israel that they have lost perspective on what is going on in the rest of the world, and may have lost sight of the very real dangers of continued antisemism, which has all sorts of consequences.

As someone familiar with Zizek’s ideas and who is well acquainted with his poignant criticism of Israel, I was quite pleased, because I didn’t need to hear over again from him how Israel is occupying the Palestinians. And really, as a philosopher who spends his time in Europe, what could he renew for us on that? But of course, an activist in the audience was not happy that he did not devote enough time to criticizing Zionism, so she asked him why that is.

He proceeded to say that Zionism is not the worst evil in the world. He mentioned the strangling of the West Bank by Israel as a colonization project and said that there should be maps everywhere hanging of what belongs to whom in the West Bank so people who  can really see Israel’s domination.

But he also stated that someone from the Democratic Republic of Congo would sell his mother into slavery in a heartbeat for the chance to move to the West Bank.
By coming to Tel Aviv and speaking to a group of Israelis, not about the ills of Israel, but rather the deep and perverse ways in which antisemitism persists in Europe and America today and pervades Zionism and Israel as well, Zizek expressed for me the very real frustration with a certain trend of radical leftwing activism today, in which Israel’s wrongdoings seem to completely overlook, discount or negate very real issues pertaining to Jewish existence and identity, as it plays out in global politics.
I believe Zizek’s point is that antisemitism not only continues to exist, but is reincarnating itself in different forms that Israelis need to pay more attention to – and that this is highly detrimental, not just to Israel — but in the larger scope of racism and violence, and how we deal with global problems — is something that is detrimental to everyone.