While I was visiting Canada this summer a postcard arrived to my home in Israel. It was official looking and it explained how to procure my gas mask from the post office. The window of opportunity to do this came and went while I was abroad. In the end, I had to make a special order. 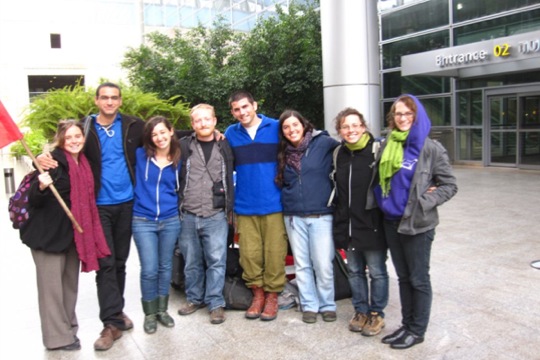 Somewhere in the back of everyone’s minds is the looming potential of war, other forms of violence, and these days we even have to be on the look out for racially motivated street lynches in city centers. Stores here require that you open your bags upon entry in order to check for weapons, racism turns to mob violence easily in my neighbourhood, and the weight of potential violence underlies much of life in Tel Aviv. About an hour from where I live Molotov cocktails are thrown at cabs carrying families, military checkpoints are regular, and gated communities with armed guards are the norm.

The spectre of violence is a part of everyday life here. Palestinians, Jews, and everyone else in this place experience it on a regular basis, but the past few months of speculation about war between Israel and Iran have changed the norm, at least for me. Maybe it’s because I am Canadian. At first I didn’t think much of it. Many have agreed that “wolf” has been cried too often over the last ten years to believe any talk of war with Iran. Rather, war will either come, or not. Only Bibi knows what Bibi is thinking, but recently friends began talking about war with Iran as if it was a probability. It seemed that suddenly everyone knew what Bibi was thinking.

Dinner outings and bar nights in Israel are routinely political roundtable forums. The past few weeks have been different. I have learned how gas masks are given out, and the fact that most people have no idea where the nearest bomb shelters are. I have learned that hipsters in Tel Aviv and Ramallah, and religious Jews and Palestinians in Jerusalem all fear war in the same way. No matter who I have spoken to, everyone has the same basic fears. The same nervous smile comes across everyone’s face and the same shrug is motioned. The same relief is felt that none of us know, while the same heavy weight is carried as we go about our day to day.

As a Canadian who grew up over the last few decades in Toronto, I haven’t ever experienced this kind of feeling of doomsday clock. Every war I have witnessed has been on TV. Two days ago there was a crashing noise outside my apartment. As I heard it, I remember thinking to myself: This is it. I find it hard to believe that any human with a television, radio, or internet connection is not feeling this way, but I also know that as a Canadian there is an emotional disconnectedness from the very human emotions that come with this kind of violence on the horizon.

It may be that all this talk of war is just a ploy to keep our focus off the terrible injustices of the occupation. It may be that Iran’s nuclear capabilities are a threat to world peace. It may be that Bibi mistakenly believes that he is Churchill reborn. I don’t know.
I do know, however, that it is important for people who are not here to be told about the feeling of disempowerment that exists in this situation. All of the fear and all of the unfounded speculation is rooted in our inability to control what happens next. It is the same deep sense of powerlessness that exists here with regard to the occupation and the Israeli-Palestinian conflict. We can shout in the streets and spread memes on facebook, but we don’t get to choose how this goes down. It is a scary feeling.

A. Daniel Roth was born and raised in Toronto and is currently a Tel Aviv–based writer, photographer and educator. His photography and writing can be found at allthesedays.org