In his attempt to tackle the housing crisis that is largely responsible for his rise to power, Finance Minister Lapid fails to address affordable and public housing, and is setting himself up for a battle with environmental groups. 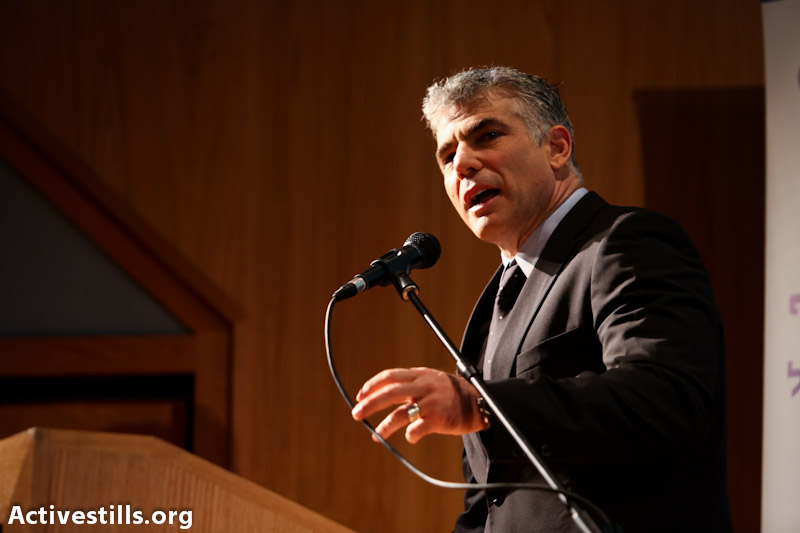 Late last month, Finance Minister Yair Lapid made a dramatic announcement: Israel’s government, he said, would encourage construction of some 150,000 long-term rental apartments over the next decade. “We have a national emergency,” he explained, “which threatens an entire generation of young people, who fear they will never have an apartment.”

The announcement came after the first meeting of the “housing cabinet,” a ministerial task force chaired by Lapid himself. This week, that panel voted to approve a “national housing plan,” a lengthy document put together by government officials that will institute far-reaching changes in Israel’s housing market.

After moving quickly to draft a national budget and conscript the ultra-Orthodox, Lapid, a former newspaper columnist and political novice, is now leading a hasty attempt to lower the cost of housing in Israel, following the previous government’s failure to do so. However, many of the proposals contained in his plan will be difficult to implement and its potential impact on housing prices is unclear.

The Big Idea at the center of the plan is “rental housing.” Lapid envisions a new kind of neighborhood where everyone rents their apartments on multi-year leases – not from individual landlords but from institutional investors, such as banks and insurance companies. Under his plan, enormous rental-apartment complexes of this kind would be built on the outskirts of Israel’s major cities and towns, on land currently used as parks and farmland.

Somewhere around a quarter of the apartments in these new neighborhoods would be rent-controlled units. Lapid, in his trademark populist style, put it this way: “a policeman would live next to the people he protects, a teacher next to his students.” He deemed this a “nice social element.”

While the exact terms of the proposed rent-control arrangement are still vague (significantly, Lapid avoids using the term “affordable housing” in his plan; more on that below), the plan does guarantee sweeping tax exemptions and “adequate returns” to the financial institutions building and operating the projects. He even suggests that oversight over the projects be outsourced, rather than performed by government regulators. (Still, corporate boardrooms, in off-the-record statements, deemed the project “insufficiently attractive.”)

Also problematic is Lapid’s intention to bolster the controversial “National Housing Committees” (known in Hebrew as vadalim), a system of fast-track planning committees created under Netanyahu’s previous government. Deeply unpopular with the public, the vadalim were created to bypass Israel’s regular planning regime, thus allowing developers to skirt many of its checks on development.

By setting his sights on green areas, Lapid is also setting himself up for a clash with Israel’s powerful environmental movement: building 150,000 new apartments means paving over an area roughly 1.5 times the size of Haifa. The environmental organizations, which perceive their role in defending open spaces from development as an almost sacred mission, will move heaven and earth to prevent that from happening.

Lapid’s plan would also contradict national planning policy, which is largely designed to preserve those same green spaces. However, government planners, apparently working in coordination with Lapid and Netanyahu, are quietly putting into place unprecedented changes to Israel’s official planning doctrine that would scale back most of those protections (many of which were created after exhausting campaigns waged by green groups), with little research into the consequences of doing so and without facilitating public debate on the matter.

While Lapid’s plan goes further than anything the last government did, it appears to stop short of employing the two major tools used to control housing prices in countries around the world: affordable housing and public housing.

The term “affordable housing” refers to a specific set of policies and incentives designed to provide housing to middle-income people at below-market rates. Affordable housing programs are often used by large cities to prevent neighborhoods from becoming exclusively inhabited by the rich. In Israel, several cities (including Tel Aviv and Jerusalem) have attempted to create such programs, but were stopped by the government, claiming they lack the legal authority to do so.

Incredibly, such a law has been on the table for at least two years, after being drafted by the Justice Ministry – but the last government refused to advance it, apparently for ideological reasons. Lapid’s plan contains no reference to this absurd situation.

On public housing (state-built or subsidized housing for low-income people), Lapid’s approach has been inconsistent. Israel has not built any new public housing units in a generation, as successive governments have preferred granting limited rental subsidies to people who would qualify for such units. However, as poverty rates have risen, renewed calls have been made for the government to once again start building public housing.

After initially indicating that some of his proposed 150,000 apartments would be public housing, Lapid then reportedly decided to repeal Israel’s progressive public housing law (passed by the Knesset in 1998, but never fully implemented). He later backtracked.

In refusing to wholeheartedly embrace a policy that would provide both affordable housing and public housing, Lapid has stuffed himself into the same neo-liberal straightjacket that prevented the previous government from having any real effect on the housing market. Rent control is a good start, provided it actually ensures affordable rates for middle-class tenants. Whether Lapid’s committee will take such a step remains to be seen, as the details are hashed out over the next few months.

For the moment, the plan appears to enjoy wall-to-wall support within Netanyahu’s coalition (including, apparently, from the prime minister). With any luck, the opposition parties in the Knesset and non-governmental organizations like the Coalition for Affordable Housing in Israel, will manage to influence the plan for the better. In any case, after spending several years standing aside and watching the problem grow, the Israeli government is finally mobilizing for some sort of action. If nothing else, that is at least a step in the right direction.