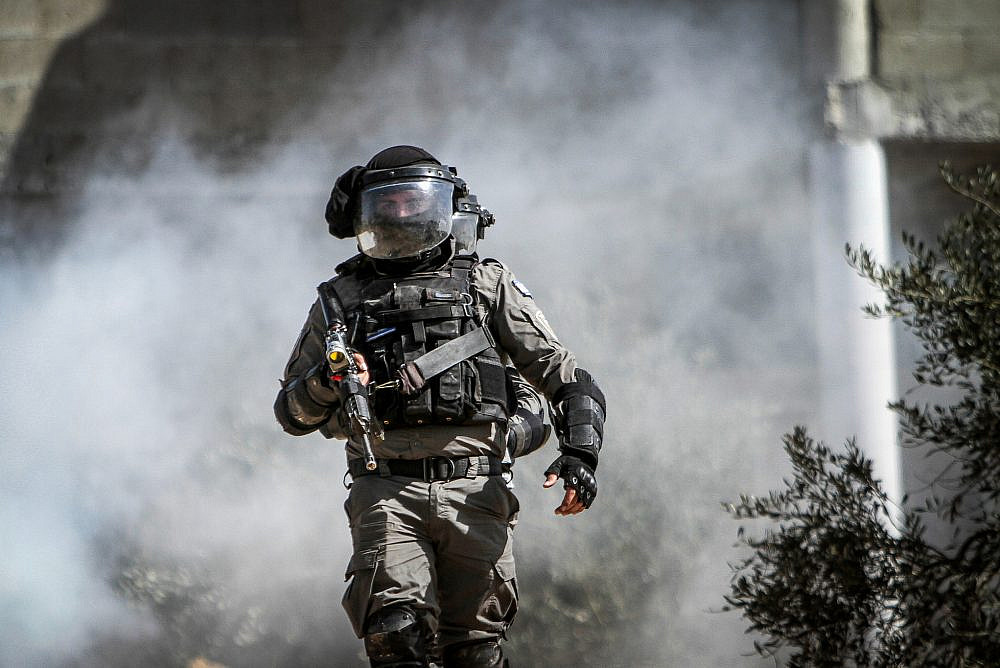 An Israeli soldier seen repressing a Palestinian protest against the Israeli outpost of Evyatar, in the village of Beita, near Nablus, occupied West Bank, February 18, 2022. (Nasser Ishtayeh/Flash90)

The shooting at a soldiers’ bus on Sunday in the Jordan Valley, in the occupied West Bank, sent Israel’s military reporters and security commentators rushing to the news studios in familiar fashion. Accordingly, everyone used the same vocabulary to describe what happened: the Palestinian shooters were defined in all of the reports as “terrorists,” while the event itself was a “terrorist attack.”

And yet, none of the reports I saw on the various channels mentioned the basic fact that the shooting happened in occupied territory. The Israeli media avoids making the crucial distinction between an action directed against soldiers and an action directed against civilians; just like the regime it serves, in the eyes of the vast majority of the Israeli media there is no Palestinian struggle that is not inherently defined as terrorism, be it armed or unarmed.

Every Palestinian protester is a “rioter” or “terrorist,” and all armed resistance to Israeli invasions into West Bank cities, which are becoming an almost nightly event, is “terrorism.” All the while, Israel is steadily and alarmingly expanding the applicability of the concept of terrorism to the Palestinian population. Over the past decade we have heard Israeli officials accuse Palestinians of such absurdities as “construction terror” and “diplomatic terror,” while just last year Defense Minister Benny Gantz’s declared several of the most prominent Palestinian civil society organizations to be “terrorist organizations.”

The media’s conduct is not only unprofessional; it is a dangerous manipulation of the public mind, which is also no longer able to distinguish between terrorism and legitimate opposition. And yet, paradoxically, it is precisely this public — that is, the civilian population — that has the greatest interest in preserving this distinction, which is recognized and anchored in the international laws of war. 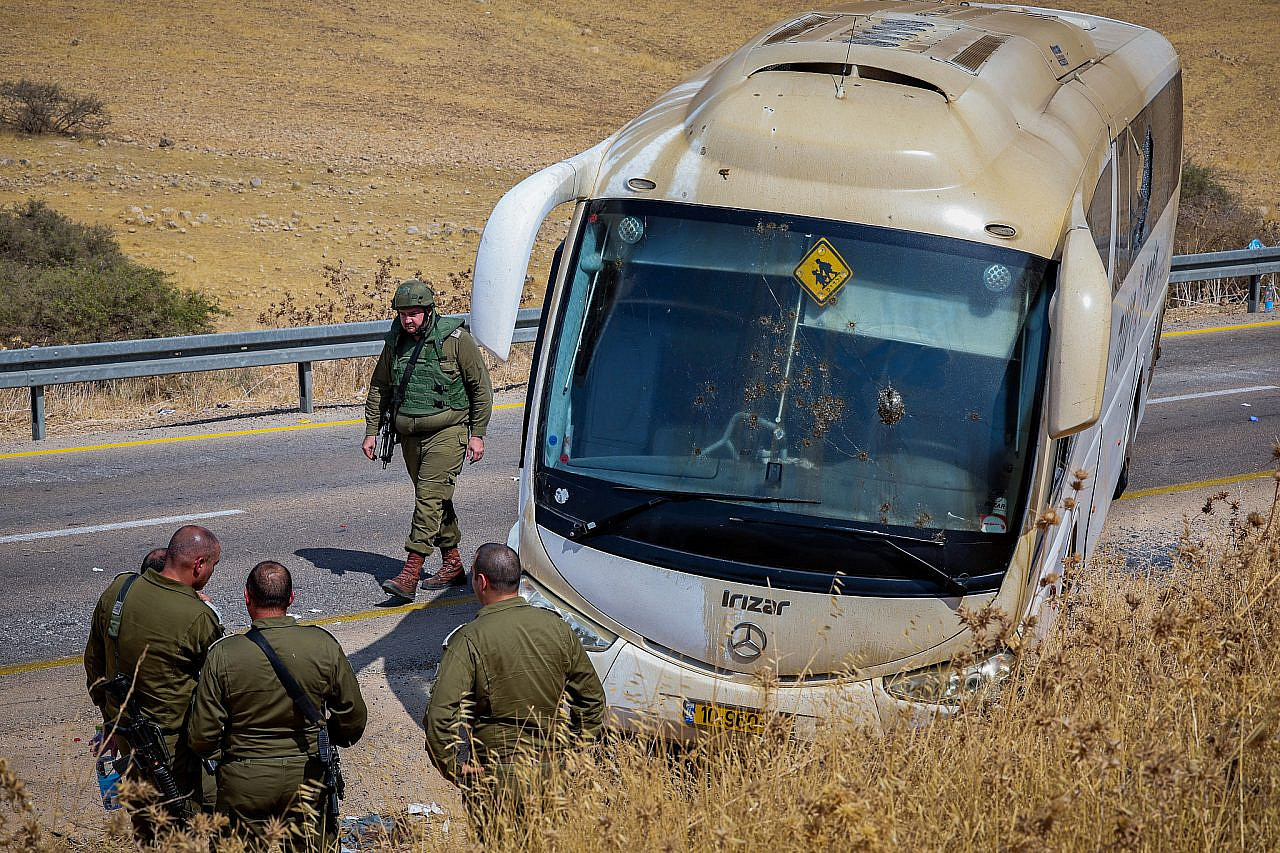 Israeli security forces at the scene of a shooting attack on a bus on Road 90 in the Jordan Valley, occupied West Bank, September 4, 2022. (Flash90)

As soon as a person puts on a military uniform, they receive the protections and rights stipulated by the laws of war, such as the right to use violence — of course, within the limits of those laws. But they also waive certain protections, such as becoming a “legitimate target” in the armed conflict. In doing so, international law seeks to clearly mark the limits of violence: combatants fight combatants, civilians should be left out of the story.

But part of the problem is that Israel does not even recognize any Palestinians as combatants. This category simply does not exist in the Israeli legal and political mindset — even when they are clearly marked as such, whether as part of an armed group, by carrying weapons, or in some cases by wearing military fatigues.

When it comes to the Palestinian struggle, Israel chooses to have its cake and eat it too: to kill Palestinians as combatants, while jailing them as civilians, not as prisoners of war, as is required by international law. Trampling over international law may serve the violent and belligerent goals of the Israeli regime, but beyond its illegality and immorality, it goes against the interest of the Israeli public itself.

Moreover, even if it is not to the liking of the military commentators, the fact is that international law recognizes the right of a people to struggle for its freedom, and for “liberation from colonial control, apartheid and foreign occupation by all the means at its disposal, including armed struggle,” as affirmed, for example, by the UN Commission on Human Rights in 1982, and the UN General Assembly in 1990.

The manner in which violence and force is used should be in accordance with the laws of war, whose main purpose is to protect the uninvolved civilians on both sides. By all these legal standards, the shooting in the Jordan Valley was an act of armed resistance against an occupying power, on occupied land. 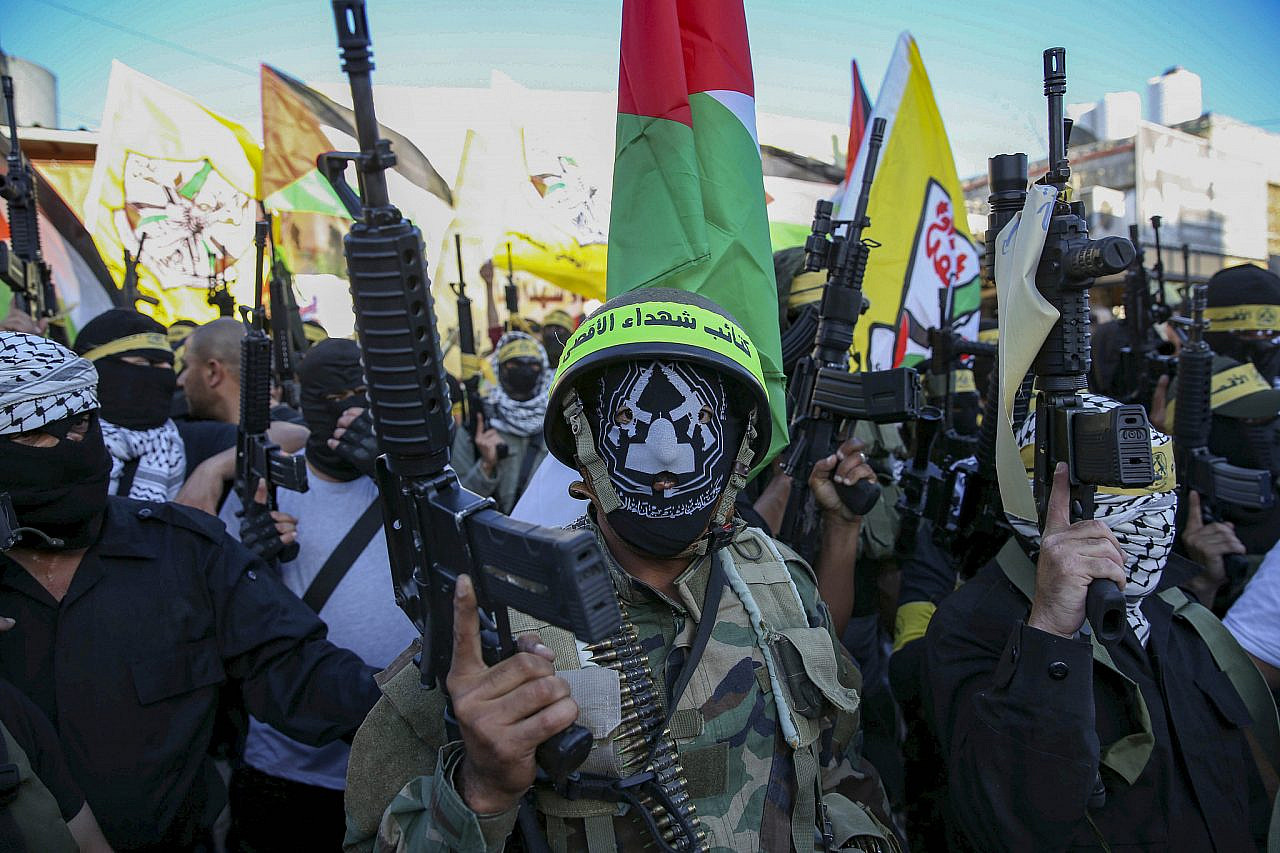 Palestinian militants from the Al-Aqsa Martyrs’ Brigades, popularly regarded as the military wing of Fatah party, in a rally of support in Halhoul, occupied West Bank, June 27, 2021. (Wissam Hashlamoun/Flash90)

Despite Israel’s smokescreen tactics, aided by a compliant media that will simply regurgitate every single thing the regime says about Palestinians, the facts must be stated clearly: as long as the occupation, which is an integral part of Israel’s apartheid regime between the river and the sea, continues, the Palestinian struggle against it will also continue, including by use of arms. And the right to conduct this struggle is anchored in international law.

As such, the Israeli public has an interest in this struggle being limited to combatants, rather than dragging uninvolved civilians — both Israelis and Palestinians — into armed confrontation. International law, which Israel blatantly ignores, was created for this very purpose.

And if Israel does not distinguish between an action against occupation soldiers on occupied land and an action directed against uninvolved civilians in the heart of Tel Aviv, why should the Palestinians make the distinction?