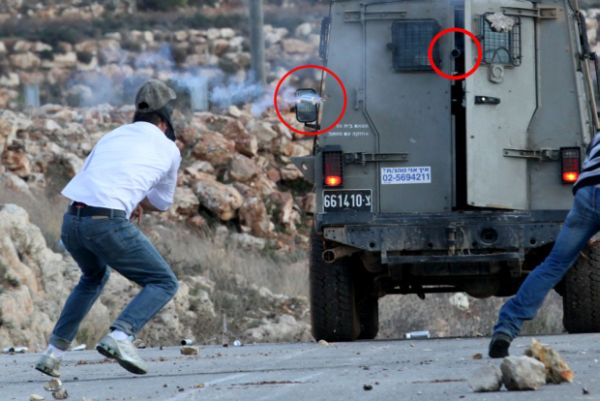 The IDF has launched an investigation into the circumstances which led to the death of Mustafa Tamimi,28, of Nabi Saleh during a demonstration against the takeover of his village’s lands by the nearby settlement of Halamish, in the West Bank.

Figures in the army’s Central Command said the soldier claimed he “didn’t see” Tamimi. But even if that is true, the IDF’s rules of engagement prohibit the firing of tear gas grenades from a rifle pointed directly at demonstrators or from a distance of less than 40 meters away. They also stipulate that the shooter must use the rifle sight and verify that no one is in the line of fire.

The army also claimed that Tamimi was throwing stones at the soldiers. From the pictures taken at the scene (above) it’s clear that the protesters posed no danger to those seating in the bullet-proof Jeep.

Israel Defense Forces officials have told Haaretz that Tamimi’s death was “an exceptional incident.” Still, as we have reported here in the past, firing tear gas canisters at protesters from close range (in violation of army orders) is a common practice in the West Bank. A couple of years ago, Palestinian protester Bassam Abu-Rahmeh of Bil’in died after getting hit in the chest by a tear gas canister [video]. A year later, his sister, Jawahar, collapsed from the effect of a tear gas and later died in a Ramallah hospital.

I have seen tear gas canisters shot directly at protesters (including myself) in several demonstrations in Bil’in, in Hebron and in Nabi Saleh.

A 2010 Wikileak cable originally sent from the U.S. Embassy in Tel Aviv quoted Central Command Major General Avi Mizrachi, warning that the army would step up measures against demonstrations in the West Bank, “even [in cases of] demonstrations that appeared peaceful.” Here is a recent video from Nabi Saleh which shows this policy in action. You can see the army using excessive force agaisnt a handful of protesters who were only singing and clapping.