facebook twitter email link
Soldiers from the Karmei Tzur settlement/military base invaded a civilian house this afternoon in Beit Ummar using live ammunition and sound bombs. During the raid, woman and children were injured as the soldiers harassed one of the Popular Committee leaders of the village. 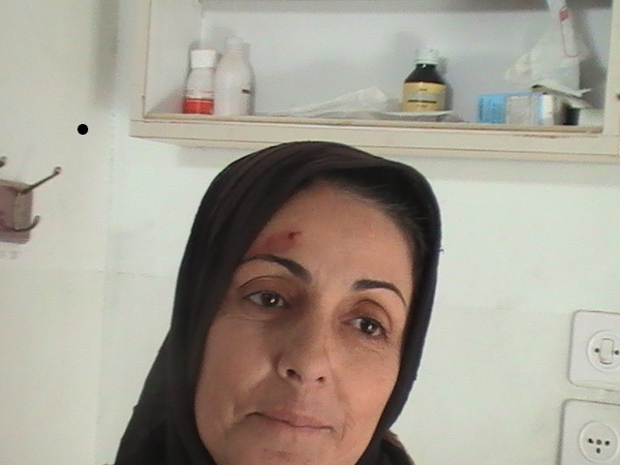 One of the Palestinian Victims of Today's Attack on Beit Ummar. Picture Credit: PSP

At 3 pm, soldiers came from the Karmei Tzur settlement to the house of Ibrahim Abu Maria in Beit Ummar. Soldiers attacked his wife by hitting her on head and also attacked some of his children in a similar manner. The soldiers rampaged the house, breaking items left and right. The only clear motivate of this attack was to intimate Abu Maria, who is active member of the village’s popular committee which is responsible for weekly non-violent demonstrations against the occupation. Abu Maria’s house is also subject to constant harassment by the army because it sits so close to the Karmei Tzur settlement.

As the attack on the house intensified this afternoon, members of the villages popular committee attempted to help the family. The army responded by firing ten rounds of live ammunition at the villagers and throwing sound bombs directly at woman and children. The woman and children involved in the attack are now receiving treatment for shock and their wounds in a local hospital. To add insult to injury, the army set up a floating checkpoint at the entrance to the village. This resulted in a delay in reaching the hospital.

The episode sounds like it could be out of the Breaking the Silence testimonies, which are being released this week. Today’s takeover provides further justification that the crime of occupation only intensifies with each passing day. Israel is engaged in a violent program of provocation against Palestinian non-violence. Each move the state makes serves to strengthen the control of the West Bank and by extension the humiliation of Palestinians. Yet, as the testimonies show, the price of being the occupier is high for Israeli society. As Amira Hass mentioned in her speech at the BtS book launch we are watching the state of Israel commit suicide.

Beit Ummar and the adjacent Saffa valley have recently witnessed a tide in repression by the Israeli army. On November 18th, thirteen Palestinian, Israeli, and international activists were arrested when accompanying farmers to their land in the Saffa valley, near the illegal settlement of Bat Ayn. In the past month, soldiers have raided the village at night and made arrests up to three times a week. Thirty five people were arrested in October, and several have been arrested this month.

Karmei Tsur, an illegal settlement according to international law, is one of five built on land belonging to Beit Ummar villagers. The demonstration is held every Saturday and organized by the National Committee Against the Wall and Settlements in Beit Ummar, and the Palestine Solidarity Project.
From the Popular Struggle Coordination Committee