A jobs website for Jews only is fined for violating Israel’s anti-discrimination laws. The founding generation of Israeli leaders very much espoused the idea of ‘Hebrew Labor’ and not hiring Arabs. 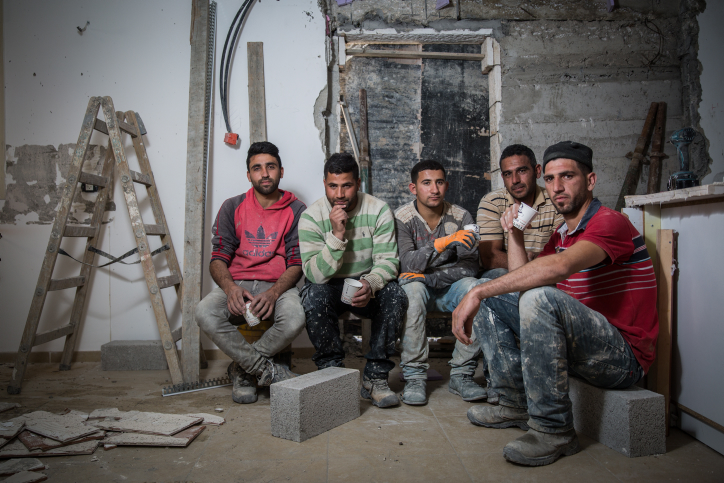 Palestinian construction workers from the village of Abadiya pose for a portrait in a house under renovation in the settlement of Alon, north of Jerusalem, February 16, 2016. (Hadas Parush/Flash90)

In a judgement that would have upended one of the earliest tenets of Zionism and surely upset Israel’s founding father David Ben Gurion, a Jerusalem court on Monday ruled that a job listings website that publishes ads exclusively for Jews is illegal.

The judgement concluded a lawsuit filed by the Israel Religious Action Center (IRAC) and Mossawa Center against the owner of the site, Avodah Ivrit (“Hebrew Labor”), claiming that it violates Israel’s anti-discrimination laws. The website publishes wanted ads by businesses and employers that only hire Jewish staff, as well as job seeking ads by Jews only, while prohibiting Arab citizens of Israel from doing the same. Avodah Ivrit was forced to pay NIS 40,000 ($11,300) in damages.

At the time the lawsuit was filed, the site alleged that hiring non-Jews poses a both a “security threat” as well as a “threat to the Jewish people” due to potential miscegenation, according to the ruling. The site also includes a user feedback page, where users described the “good feeling of employing Jews,” and the “satisfaction of employing my Jewish brothers, rather than giving money to those who are deemed my enemies.”

Erez Liberman, who co-founded Avodah Ivrit and is named as the primary defendant, rejected the claim that Avodah Ivrit discriminates against non-Jews, and that its work focuses on “doing good for the Jewish people.” He further claimed that Israel’s anti-discrimination laws were not intended to prevent groups of people who share special bonds, from helping one another. Moreover, IRAC and Mossawa’s lawsuit, Liberman said in court filings, rests entirely on the fact that Israel is a democratic state, while his claim is based on Israel’s Jewish character.

Judge Einat Abman-Muller rejected Liberman’s claim that his website and its customers’ preference for Jews should not be considered a form of discrimination, instead ruling that the law prohibits discrimination in the provision of public service on the basis of religion, race, or nationality. Furthermore, Amban-Muller noted that Israel’s values as a Jewish state prohibit discrimination and mandate equality: “The vision of Israel’s prophets became the pillar of fire leading the struggle in support of the weak and the different toward equality.” 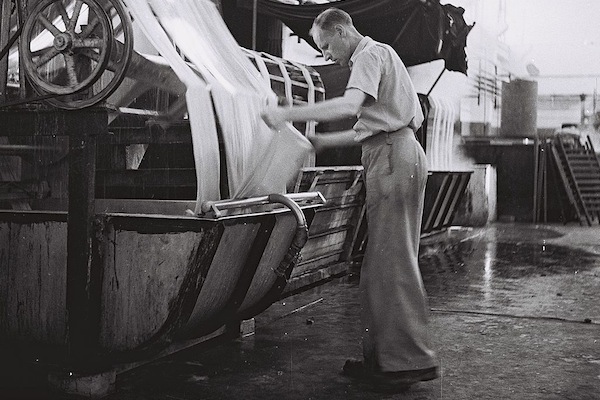 The idea of Jewish-only labor played a formative role in Zionist history, however. For years during the pre-state period, the Labor Zionist movement — the dominant force in Zionist politics, which forged Israel’s ideological, cultural, and material foundations — championed the idea of creating a new economy exclusively for Jews in Palestine. This was part of Zionism’s attempt to create a “New Jew” — one who would form a connection to the land through labor, contrasted with the “old” bourgeois Jew of Europe, often viewed by the Zionist leadership as meek and defenseless.

Through institutions such as the Histadrut, the national Jewish labor federation founded in 1920, the Zionist movement was able to create a wedge between Arab and Jewish workers. Excluding Palestinians was not an end in itself, but rather a means of statecraft — creating a powerful Jewish working class in an attempt to displace Arabs. Ironically, the realities begotten by Zionism’s supposedly socialist wing contradicted its oft-repeated assurances that Zionism would not only liberate the tame European Jew, it would also free the Palestinian from the chains of feudalism.

However, not all Jewish workers bought into the idea of Hebrew Labor. In her book, Between Expropriation and Exploitation: Status and Struggles of Arab Workers in Palestine and Israel, former Hadash MK Tamar Gozansky describes how Jewish workers, often of communist persuasion, stood up for the rights of Arab workers. In one case, she tells the story of a group of Jewish laborers who objected to the expulsion of Arab workers from their work in the orchards in Nes Tziona.

David Ben Gurion, who served as the secretary-general of the Histadrut at the time, ordered the dissenters to appear before the Histadrut’s labor tribunal, calling their protest illegal. The dissenters had distributed a leaflet stating that the intention was “to displace the Arab workers, but the Jewish workers decline to build themselves up on the ruins of the Arab workers.” In Ben Gurion’s eyes, Hebrew Labor — and its consequential material dispossession of Palestinian workers — was a prerequisite for establishing the Jewish state he had envisioned.