After South African Jewish schoolboy Josh Broomberg donned a Palestinian keffiyeh in solidarity with Gazans at the opening of the World Debating Championships, the local Jewish community exploded in a torrent of vitriol against anyone who dared to deviate from the strict communal line of full support for Israel’s military operation in Gaza.

When Josh Broomberg left for the World Debating Championships in Thailand last month, he left as one of the crowning products of South Africa’s Jewish community, which stands at a humble 60,000 people. He was the deputy head boy of King David Victory Park Jewish day school and he was off to represent his country. Perhaps it was his connection to Jewish history, which highlights the Jewish commitment to justice, or maybe it was being brought up as a child in post-apartheid South Africa, with its progressive constitution, that led Broomberg to publicly don a Palestinian keffiyeh for the opening ceremony of the debating championships in an act of solidarity with innocent Palestinians killed in Gaza in Israel’s Operation Protective Edge. Whatever it was, and despite his expressed public commitment to Zionism and Judaism, an anonymous petition was soon initiated to strip him of his title of deputy head student and his school honors. As the Jewish community raged, its leadership remained quiet. 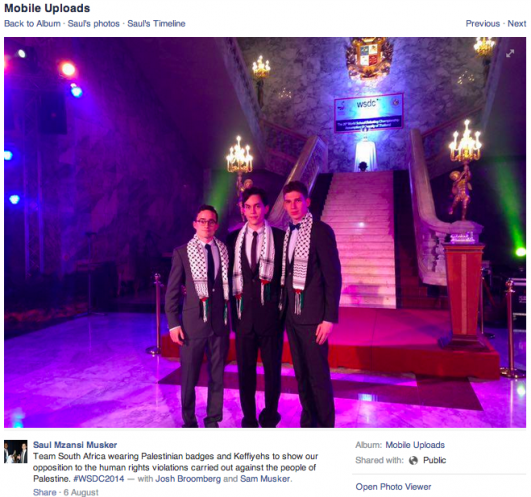 A screenshot of a Facebook post in which Josh Broomberg is seen wearing a keffiyeh at the opening of the World Debating Championships in Thailand, August 6, 2014 (Facebook)

This incident didn’t materialize out of nowhere; it was the current violence in Gaza that spurred it. Gaza has dominated the news in South Africa for the past month. Most South Africans, like many poor and working class people around the world, identify with the oppression and violence faced by Palestinians; they tend to view Israel through the prism of their experiences living under apartheid. Condemnation of Israeli military action in Gaza has been forthcoming from South Africa’s ruling party, the African National Congress (ANC), and the largest trade union federation, Cosatu, with several pointed public statements issued. Simultaneously, the Palestinian solidarity movement has had a significant impact in getting ordinary South African’s onto the streets in protest. Last Saturday reportedly over 100,000 people marched on the streets of Cape Town against Israel’s actions in Gaza and called for the expulsion of Israeli Ambassador Arthur Lenk. Despite mass public pressure, and the ANC’s own statements (one of which praised Josh Broomberg), the South African government has ignored calls to diplomatically isolate Israel.

Meanwhile the institutions of the South African Jewish community have remained steadfast in their uncritical support of Israeli action in Gaza. Rallies around the country co-hosted and attended by all major Jewish communal bodies have drawn 15,000 people in total. The message of these rallies has echoed Prime Minister Benjamin Netanyahu’s office: military action in Gaza was unavoidable, the IDF acts at the apex of morality, and Hamas bears all responsibility for civilian casualties in Gaza.

The origins of the conservative Jewish communal structures are difficult to track. After a period of conspicuous silence during the apartheid era, the late 1980s and 90s saw a consolidation of Jews into South Africa’s major cities, and of Jewish children into Jewish schools. Over the same period, the numbers of Jews ‘returning’ to Orthodox Judaism increased and religious Orthodox Jews began to dominate communal positions; the schools being no exception. 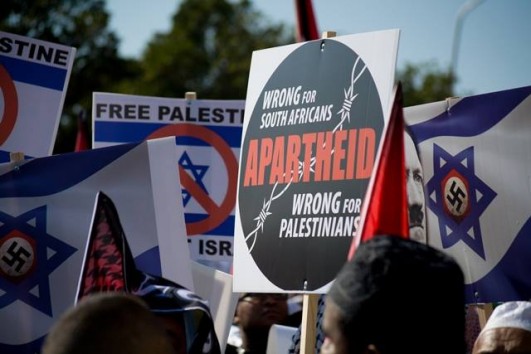 South Africans march in solidarity with Gaza, in Cape Town, South Africa, on August 9, 2014. Some contend that this was the biggest protest in South African history with estimates ranging from 10,000s to 100,000 (photo: Marwaan Britow)

An overtly nationalist and Orthodox approach to Jewish education, and a Zionist narrative that has long-since been dismissed by historians has generated a steady output of students with a homogenous view of Judaism and Zionism. This view sees itself as traditional, but is in fact a radical new conservatism, or fundamentalism, unlike the culture that dominated the Lithuanian Jewish milieu to which many South African Jews trace their ancestry. Tolerance towards those who deviate from the norm is seldom encouraged nor tolerated.

This conservative community sits uneasily alongside another tradition, that of radical Jews who played a storied role in helping to liberate South Africa from apartheid. Whilst more than 10,000 people recently rallied in support of Israel in Johannesburg, a small counter picket of Jewish Voices for a Just Peace grabbed media attention. A week later 500 “Proudly Jewish” South Africans under the moniker “South African Jews for Gaza” condemned Israel’s actions in the Strip in a letter published in the Sunday Times, South Africa’s largest weekend newspaper.

Within the Jewish community the response to those who’ve expressed dissent has been vitriolic. Anonymous smear campaigns have been launched against progressive Jewish voices and organizations. Death threats have been bandied about without shame or fear of censure. Personal invective has been levied at those who dare to speak off a different script to the common narrative. Leading intellectuals like Professor Steven Friedman have been uninvited from speaking at communal events on unrelated matters. Saul Musker, one of the debaters pictured with Broomberg in the now infamous Facebook picture, characterized this, perhaps only slightly too strongly, as “the unprecedented rise of right-wing fascism in the institutions of South African Jewry.” 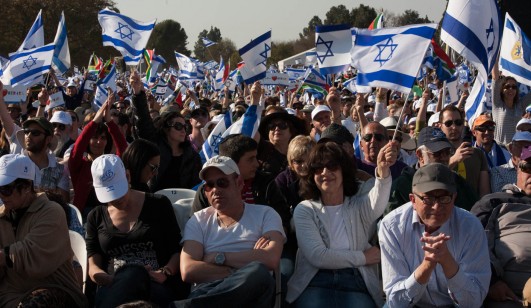 These past few weeks of intra-communal fighting could very well mark a tipping point in the struggle for dissent within the South African Jewish community. The numbers of those with a more critical outlook on Israel’s actions in the West Bank and Gaza are steadily increasing, despite remaining small in comparison to the mainstream community. A small space is being pried open where criticism of Israel by South African Jews is heard. This has forced traditionally conservative structures to attempt to slightly moderate their positions.

In the past few days both the head of the South African Jewish Board of Deputies and the chief rabbi of South Africa, Warren Goldstein, have issued calls to respect differing opinions. These statements are new and unusual. Before the Broomberg incident there was no word from any formal structure on the right to a different opinion, the value of diverse views, or the need to maintain a civil discourse within the Jewish community. Instead, their unquestioning responses to the developments in Gaza bolstered contempt for those who dared to question their narrative.

The South African Jewish community is still saddled by an unimaginable deep sense of fear of internal difference. At its core sits the interaction of the challenge to a Zionist narrative that the community has spent years manufacturing and the unfounded belief that even the slightest demonstration of solidarity with Palestinian suffering could somehow motivate an anti-Semitic response from a South Africa that sees parallels between apartheid and the treatment of Palestinians at the hands of the Israelis. These fallacies have created a toxic climate resulting in vitriol being focused on those who dissent.

Whilst violence rages on in Israel and Palestine, South African Jewry is struggling for real leadership in the fight for a space within the community where alternative views can be heard.

Yoni Bass works for Equal Education, a social movement aimed at improving the quality of public education in South Africa. He tweets from @Yonibass.