Four left-wing Israeli activists were taken to a hospital after being violently attacked by settlers in the West Bank on Saturday. Violence by settlers against activists has grown more common over the past few months, yet it seems the authorities are doing very little to stop it. 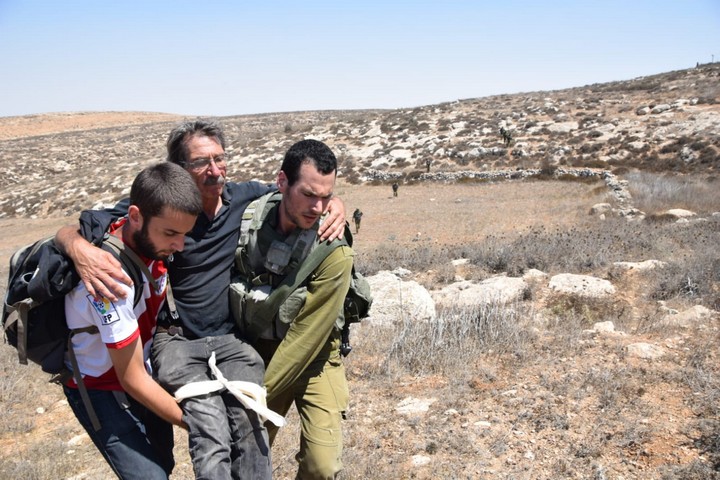 A Ta’ayush activist is evacuated after being attacked by settlers in the illegal outpost of Mitzpe Yair, south Hebron Hills, August 25, 2018. (Nasser Nawaja/B’Tselem)

When I heard the initial reports that settlers from the illegal outpost of Mitzpe Yair, in the south Hebron Hills, violently attacked a group of left-wing Israeli activists, I remembered the briefing I underwent in that exact same spot two years ago. “Be very careful,” one of the activists told me. “The settlers can come out of nowhere, and they are not afraid to use violence. They are always ready.” On Saturday, that same activist was one of six who were attacked and hospitalized.

Pepe Goldman, 66, was also among the six who were attacked. “Now I am okay,” he told me a few hours after the incident. “It hurts a bit, but it is okay. I was hit in my ribcage, but luckily nothing was broken.” As for the other activists, Goldman said, one needed stitches for a deep wound on his arm, another may have a fractured pelvis, another had his foot dislocated, and an activist who was thrown to the ground needed medical treatment in Jerusalem.

Goldman has been active with Ta’ayush, a left-wing Israeli organization, which has been documenting settlement expansion and protecting Palestinian shepherds from settler violence, for two years. “We left as we do every Saturday morning at 6 a.m. to accompany shepherds. Sometimes when we notice illegal settlement construction on our drive we stop to take photos and pass on the documentation to the Civil Administration. Most of the time nothing happens, maybe some cursing or shoving. Usually when we arrive, the army declares the area a closed military zone — closed off to us, that is. Not to the settlers.”

“Today, after we were done accompanying the shepherds, as we were heading back to Jerusalem, we heard that the army had entered a Palestinian home in the area and confiscated phones, work tools, etc. without a warrant. We came, wrote down the information, and headed to Mitzpe Yair, where we wanted to photograph new, illegal construction. When we reached the site, the IDF asked us to leave, but did not prevent us from taking photos.”

But then came the settlers. “The settlers demanded the soldiers remove us, and at a certain point they became verbally violent toward the soldiers. Suddenly there were 20 of them, cursing at us and throwing us off a 1.5-meter-high structure that we were standing on, into an area full of construction waste. As we laid there, they continued throwing stones at us. They stole six of our cameras and rummaged through our bags.”

What were the soldiers doing?

The soldiers gently tried to convince them to stop, but it did not help. The settlers kept chasing us, even when we had withdrawn, even when we were already in the ambulance, they continued to curse us.

“The soldiers get their orders from Mitzpe Yair’s security coordinator. They really obey him. This is a phenomenon you see across the occupied territories — the settlers are in charge. I can count on one hand the number of soldiers who have refused orders by settlers — out of sympathy or out of fear. They make sure to kick us out using closed military orders, which is often not accurate.

“I want to emphasize: media outlets tend to refer to this kind of thing as a ‘confrontation,’ but there was not confrontation here. This was a one-sided attack. We came to photograph, there is no law preventing that, and we were attacked.”

How did you respond?

“We tried to stop them from throwing us off the structure. We never respond with violence. We defend ourselves, but we never attack. We demanded the soldiers protect us, since it was clear who was the attacker and who was the attacked. We made sure to fall as safely as possible, but when we fell, all our supplies got scattered and they stole everything.”

How long did the attack last?

“The most violent part lasted half an hour. That is a long time.”

From your experience, is this kind of violence rare?

There are violent encounters all the time. A few months ago, the settlers from Havat Maon in the South Hebron Hills threw huge rocks at us, and it took security forces a long time to arrive. A year ago, settlers from the Baladim outposts attacked us in al-Auja, north of Jericho. These were the worst examples, but cursing and shoving is routine. Sometimes a settler will come with a Pitbull who will attack the herd, or settlers will come with tractors and ram into the sheep. It is rare for security forces to try and prevent all this. Usually they kick us, the activists, out. 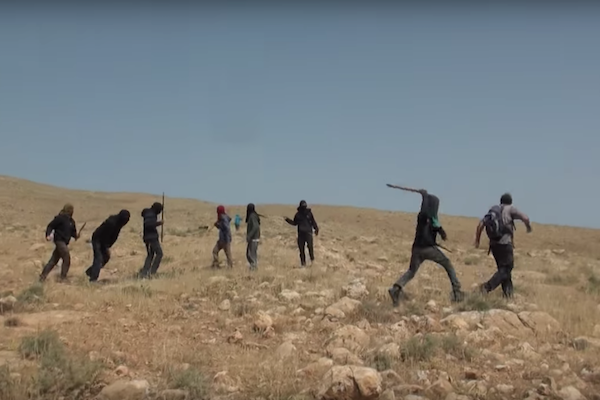 Are you planning on lodging a complaint?

We discussed the issue. At first we thought about lodging a complaint, since I managed to photograph the man who threw me off the structure. But we eventually decided that we have no trust in the system. In our experience, every attempt at filing a complaint ended with closed cases, either because of lack of evidence, witnesses, or public interest – you name it.

So we decided not to play the game. Suffice it to say, not a single person has been taken in for questioning. The authorities are not interested in investigating or punishing when the crimes are committed by the Israeli side. When it comes to the Palestinian side, however, they are extremely effective.

There is nothing surprising in this. After all, there is legitimacy from on high to label anyone who opposes the occupation an enemy, and spilling enemy blood is allowed. If this is the message from the top, why should we be surprised when things are not properly taken care of by the policeman in the field? This is the spirit of things in Israeli society today.

Are you going to go back to this kind of activism?

Of course. It is dangerous and scary, but if we surrender to our fears, then the little we do will matter even less.

The IDF Spokesperson provided the following to the incident: “This morning, a number of Ta’ayush activists came to an area where illegal Palestinian construction was taking place near Mitzpe Yair in the Judea and Samaria area. After the tools used for construction were confiscated, the activists went up to the settlement in order to provoke, leading to friction between them and the settlers living in the area. IDF soldiers in the area declared a closed military zone in order to prevent further friction, but some of the organization’s activists refused to evacuate and violated the order. The activists eventually left and the confrontation came to an end.”