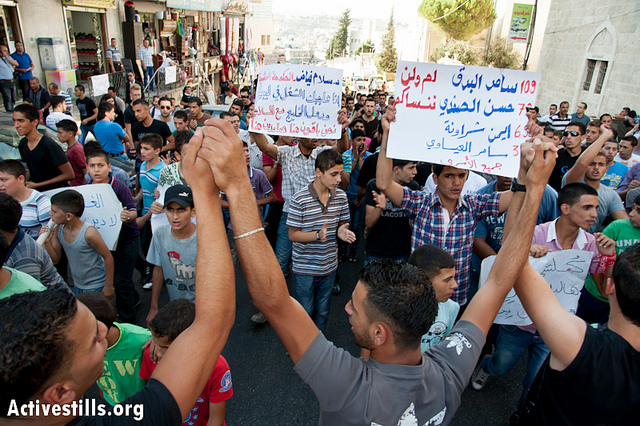 Palestinian youth blocked traffic on Hebron Road and marched toward the Old City of Bethlehem in a protest against rising costs of living (photo: Ryan Rodrick Beiler/Activestills.org)

In April 1994, Israeli and Palestinian negotiation teams met in Paris to sign one of the most important annexes to the Oslo Accords – the Paris Protocol, the agreement which regulates the economic relationship between Israel and the Palestinian Authority.

Today, 18 years after the protocol was signed, demonstrations against the agreement have spread across the West Bank. A Palestinian from the Gaza Strip set himself on fire and two Palestinians in the West Bank tried to do the same in protest against the economic situation. Palestinian Prime Minister Salam Fayyad was reported to be considering resignation and Palestinian Authority Minister of Civilian Affairs Hussein a-Sheikh submitted an official request to Israel to review the Paris Protocol. In view of the heated debate, here we provide some general background on the agreement and its implications.

The protocol defines the economic relationship between Israel and the Palestinian Authority. It was signed for an interim period of five years and was to be implemented gradually. A senior official in the Israeli Ministry of Industry, Trade and Labor told Gisha that the fact that the agreement was due to remain in effect for only five years helped encourage Palestinian negotiators to sign it: “They understood that in order to make progress, they had to agree to some very practical things. It was a five-year agreement so they said ‘let’s take the first step.’”

According to the same official: “At that point in time, it was the optimal agreement and the Palestinians entered it wholeheartedly. By the way, there are still people today who think it’s a good agreement. Albeit with limitations… as long as people are thinking about what is and isn’t good, you know you have some kind of balance.”

How is the protocol connected to the protests in the West Bank?

According to the Paris Protocol, the Palestinian Authority must peg its gasoline prices and value added tax (VAT) rate to Israel’s. Therefore when VAT in Israel was recently raised by one percent, the Palestinian Authority also raised its own VAT from 14.5 percent to 15.5 percent. A senior Palestinian official told Israeli news website Walla! (Hebrew): “There is no denying that we are a part of Israel’s economy. If Israel raises the price of cigarettes, our cigarette prices go up. If the price of gas goes up, so does ours. If things are expensive in Israel, they are expensive here too.” The official also believed that the Palestinian VAT increase would “not cause a stir” among the Palestinian public. He was wrong.

In response to the demonstrations, the Palestinian Authority announced (Hebrew) that it would cut fuel and cooking gas prices, reduce the VAT to 15 percent and pay Palestinian Authority employees NIS 2,000 from their August salaries, which have yet to be paid. It is unclear whether the Palestinian Authority has reached a new agreement with Israel on fuel prices and the VAT rate, but statements made by Israeli Prime Minister Benjamin Netanyahu seem to indicate that the agreement was in fact changed (Hebrew): “We have made some changes to the tax agreements. We are advancing certain transfers. We have also helped with Palestinian workers and a number of other measures to assist them.”

What does the protocol say?

The protocol regulates the relationship and interaction between Israel and the Palestinian Authority in six major areas – customs, taxes, labor, agriculture, industry and tourism. The protocol also stipulates that the Palestinian Authority establish a monetary authority responsible for regulating and implementing economic policies in these areas. It is worth noting that for various reasons, not all decisions included in the agreement are necessarily being implemented today. For example, Israel has significantly reduced the number of Palestinians who are permitted to work in Israel and the settlements and almost no goods from the Gaza Strip are sold in the West Bank and Israel.

Customs – The protocol establishes a customs envelope which is something between a customs union and a free trade zone. As stipulated in the Oslo Accords, Israel continues to control all borders – its own and those of the Palestinian Authority. The envelope was designed to allow the free flow of goods between Israel and the Palestinian Authority. According to the agreement, all goods that are imported into the envelope must meet Israeli import regulations and criteria. Export was not subjected to any taxes or major restrictions since it is the importing country that is responsible for checking the standard of goods entering its territory.

Labor – The agreement stipulates that both sides “would try to ensure normal movement” of laborers between the Palestinian Authority and Israel and that each side had the right to establish quotas and criteria for entrance of laborers into its territory. Palestinians working in Israel would pay national insurance, and Israel would transfer funds collected from these workers to the Palestinian Authority once a month.

Agriculture – The Paris Protocol also established a single phytosanitary (plant health) envelope for Israel and the Palestinian Authority. The protocol established that Palestinian agricultural and veterinary products meant for sale in Israel would have to meet Israeli phytosanitary standards. All restrictions that had been placed on the sale of agricultural products from the Palestinian Authority in Israel were cancelled with the exception of six types of produce. Produce in these categories was subjected to quotas for four years, after which it could be sold freely in Israel.

Industry – All Israeli imposed restrictions on building factories in the Palestinian Authority and on industrial export abroad were cancelled.

Tourism – The agreement stipulates the establishment of a Palestinian tourism authority responsible for the regulation, licensing, classification and supervision of the tourist industry, services and sites in the Palestinian Authority.

Following the implementation of the disengagement plan, Hamas’ takeover of the Gaza Strip and the development of the tunnel economy, Israel changed its approach to Gaza and some of the essential components of the protocol became difficult or impossible to implement. Today, although the Gaza Strip is still formally part of the Paris Protocol, in many ways, the agreement is no longer applied to the Strip, mostly with respect to the entry of goods and workers from Gaza to Israel. So, for example, Gaza export to Europe via Israel is negligible, and, contrary to the agreement, Israel prevents the sale of Gaza-made products in the West Bank and Israel as part of its “separation policy.” The movement of people to and from the Gaza Strip is also extremely limited and Israel does not allow Palestinian workers from Gaza to enter its territory.

However, significant cooperation still continues. As set out in the protocol, Gaza importers still pay Israel customs, VAT and purchase taxes (when required) on goods that they import via Israel. Price increases in Israel also affect prices in the Gaza Strip since many of the goods that enter Gaza through the Kerem Shalom crossing are Israeli. Even the rift between the Palestinian Authority and the Hamas government is not as comprehensive as one might think. The Palestinian Authority continues to transfer some of the tax monies collected by Israel to the Gaza Strip.