Amid intensive efforts to broker a ceasefire between Israel and Hamas, the Israeli cabinet rejected the latest U.S. proposal, yet agreed to a 12-hour suspension of fighting. 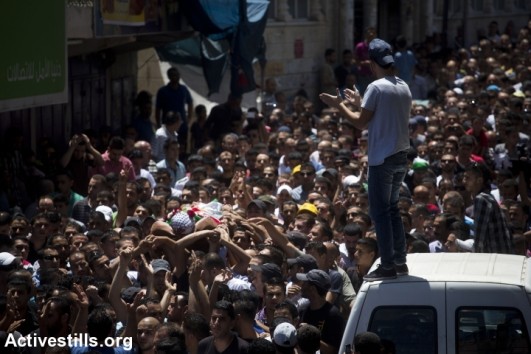 Mourners carry the body of killed Palestinian Mohammed al-Araj during his funeral at the Qalandiya Palestinian refugee camp near the West Bank city of Ramallah, on July 25, 2014, after he was shot and killed the night before during clashes with the Israeli army amid a massive protest in the West Bank against the Israeli attack on the Gaza strip. (photo: Activestills)

In a press conference in Cairo with Egyptian Foreign Minister Sameh Shoukry and UN Secretary-General Ban Ki-Moon, U.S. Secretary of State John Kerry stated that further efforts were needed to get all parties to agree on the terms of a ceasefire agreement after Israel rejected the proposal. He added that he was confident an agreement would be reached, though more effort was needed to work through issues of terminology in the proposal.

Kerry did, however, get Israeli Prime Minister Netanyahu to agree to a 12-hour pause in its military operation in Gaza. Haaretz reported that Kerry was “working towards a brief, seven-day humanitarian ceasefire to try to create a more durable, sustainable ceasefire.”

According to Reuters, France will host an international meeting on Saturday in order to rapidly work toward a ceasefire agreement. Representatives from the U.S., Britain, Germany, Italy, the EU, Turkey and Qatar are said to be attending the talks in Paris.

After 18 days of fighting, the bombardment of the Gaza Strip by Israeli forces continued throughout Friday. The Palestinian death toll approached 850 Friday evening, with the majority of casualties being civilians. 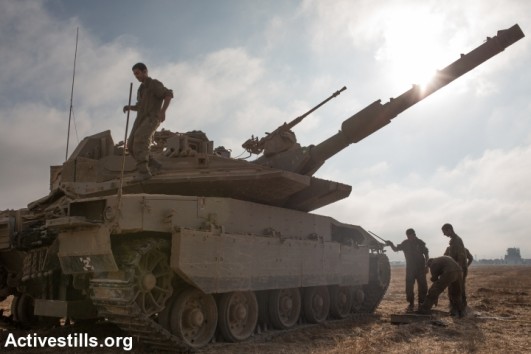 An Israeli tank is seen before entering the Gaza Strip near Israel’s border with the Gaza strip on July 24, 2014. (photo: Activestills)

Israel announced the death of another soldier, bringing the total number of Israeli soldiers killed in Operation Protective Edge to 35.

The army determined that Sgt. Oron Shaul, who was previously considered missing, was in fact killed in the Shejaiyah assault on Sunday. Six other Golani troops were also killed in that attack. Hamas had said that Shaul was captured in action.

Despite ongoing ceasefire talks, Israeli Defense Minister Moshe Ya’alon reportedly told soldiers to be prepared for the possibility that the army will be ordered to expand its Gaza ground operation “very soon.”

According to Haaretz, Hamas militants attempted to kidnap an Israeli soldier by dragging him into a tunnel. The army responded by shelling the area of the tunnel, allowing the soldier to escape.

While in the West Bank tension engulfed the territory. Maan reported that seven Palestinians were killed in the West Bank in the last 24 hours amid solidarity protests with those in Gaza. An 18-year-old Palestinian reportedly killed when an Israeli settler drove by and opened fire at a protest march.

Air France announced it would lift its ban on flights to Israel late Friday after it halted flights earlier this week amid security concerns.

Related:
Israel has alternatives to this war
‘The largest West Bank protest in years’
What does Israeli ‘acceptance’ of ceasefire really mean?