I got an email from a man asking if we could help him and his family escape Gaza if war broke out. It seems so reasonable, until you realize there is no precedent for evacuating Palestinian civilians in time of war. 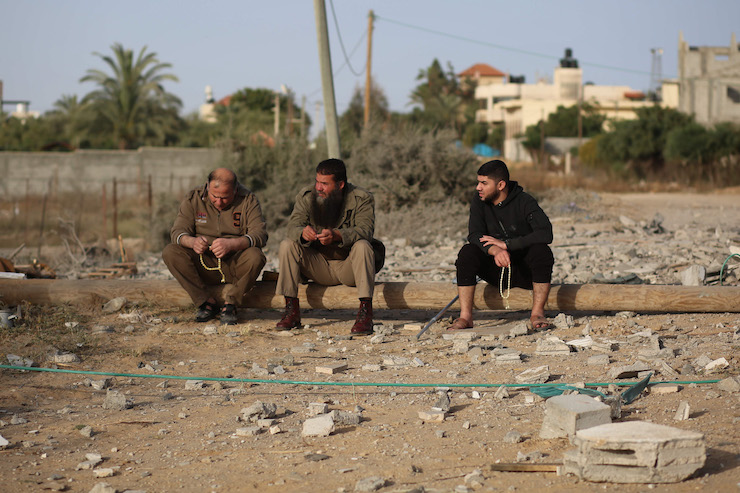 Palestinian men sit in the rubble of a destroyed home in the Nusseirat Refugee Camp, which was shelled by Israeli forces a few hours earlier, Gaza Strip, May 6, 2019. (Hassan Jedi/Flash90)

A popular social media figure from Gaza tweeted yesterday that if he had to choose a movie that most resembled life in the Strip it would be Groundhog’s Day. In the 1993 comedy, the main character is forced to re-live the same day over and over. It may seem like a flippant observation, given that yesterday was the single deadliest day of fighting between Israel and Gaza since the 2014 military operation, with 27 Palestinians killed by Israeli forces and four Israeli citizens killed by rockets fired from Gaza. The death, destruction, and fraught anticipation of another war experienced by millions are hardly things to be light-hearted about.

The observation was of course about something much more sinister – a pervasive feeling that we’ve all been here before, watching the same movie. We wake up, there’s an escalation, people (mostly Palestinians) are killed, a ceasefire whose details are never fully revealed goes into effect at just the moment when it feels like things could really spiral out of control, and then cut, the movie ends.

However, as many analysts have rightfully observed, the agreements reached in these obscure ceasefires are not being implemented, thus propelling Palestinian factions to take up arms again and reinforce their negotiating positions. We wake up, there’s an escalation, people (most Palestinians) are killed, etc. over and over again, you know the sequence.

I’m watching that movie too, from my own perspective outside the Strip, mostly from the Tel Aviv office where I work as the director of an Israeli human rights organization that promotes freedom of movement for Palestinians. But of course it’s not a movie and people are living the reality of life in Gaza – when the media is reporting and when it is not.

An email with the subject line “Evacuation in the case of war,” where a man asked if Gisha could help evacuate him and his family. It seems so reasonable, until you realize that there is no precedent for evacuation of civilians from Gaza during the last three major military operations. The only people evacuated were a few hundred foreign passport holders, and that only after the fighting had stopped.

Our field worker in Gaza shared that he tried to tell his children that the explosions they were hearing were either nothing, or were distant, or didn’t pose a threat, but lamented (half-proudly) that his young sons know better than to believe him.

A young man, just 29 years, sent us photos, before and after, of his destroyed clothing shop. He shared that he’d sunk his meager life savings into the shop and pre-ordered clothing for Eid-al-Fitr, the holiday marking the end of Ramadan when people who can afford it buy new clothes. The ground-floor store was reduced to a pile of rubble and all his merchandise destroyed in one of the strikes that took down an entire building. A missile strike put him and his two employees out of work and plunged him into the abyss of unmanageable debt in just a split second. They were maybe lucky to have escaped alive, rendering their story almost unremarkable. They don’t even make it into the macabre count of “their” dead versus “ours” on the evening news programs. 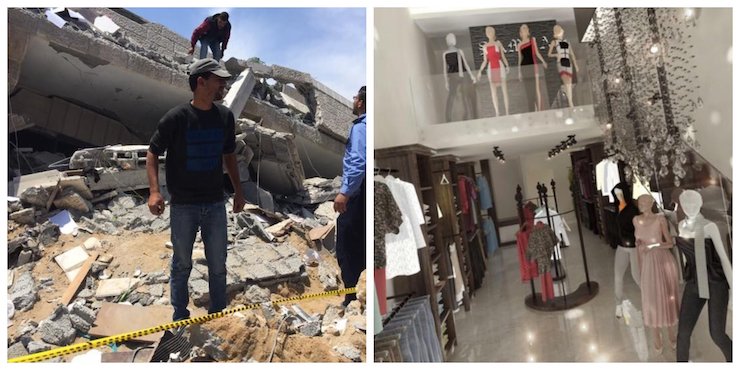 The Samra Fashion store, before and after it was bombed by Israel. “Everything I had is gone and I can’t get it back. I don’t know what to do,” owner Mahmood Said Al Nakhaleh told Gisha.

So many civilians have paid, are paying and will pay the price for the folly of morally rudderless leaders heaving us towards, and then just as suddenly away from, war. There aren’t just “two sides” to this story, there are multiple ways this can end and not all of them promise war on millions of people.

We’re stuck in a loop not just because the ceasefire agreements aren’t being implemented, but because Israel and many of its allies refuse to acknowledge that civilians make up the vast majority of the population of the strip. Their lives and every element of life in the strip have been reduced to bargaining chips – will the fishing limit be six nautical miles or 12 or 15 or back to six again? Will strawberries reach the West Bank next season? Will you get to see your sick father in the West Bank?

Israel is the main actor making choices about whether Palestinians in Gaza will live or die during any given escalation, but also about how they live in between those violent escalations – whether the shop they own will get its wares, whether they’ll get to the medical treatment they need, whether they can fish or farm safely. Other actors – Hamas, other Palestinian factions, the Palestinian Authority, Egypt, Qatar, and the rest of the international community – are all playing roles too.

But if Israel wanted out of the loop, it could, at any given moment, take any number of steps to change course in Gaza and recognize the ordinary lives of ordinary civilians who have a right to live – meaning, not just survive, but thrive. The guns have fallen silent, so to speak, but this isn’t the time to look away. It’s not about implementing or not implementing the ceasefire, it’s about breaking the curse of repeating the same script over and over again.