It doesn’t matter if the murderer in Orlando was Jewish, Christian or Muslim — the same hate crimes keep targeting us, over and over again, across the world.

By Yael Marom and Ma’ayan Dak 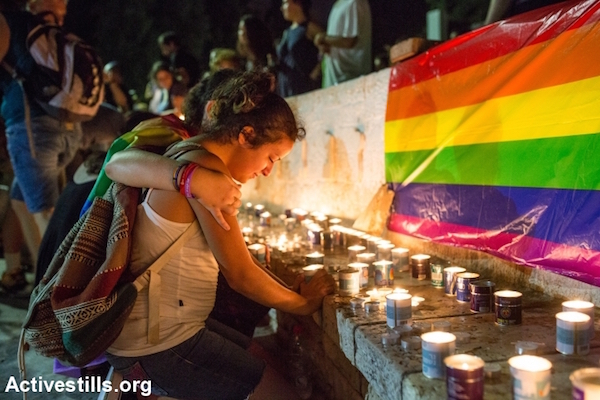 At least 50 people were killed and another 53 wounded early Sunday morning in a massacre at the “Pulse” club, a venue associated with the LGBTQ community in Orlando. The media spent the better part of Sunday trying to understand why it happened. But for many of us in the LGBTQ community, it was clear as could be: yet another hate crime in a wave of violence against LGBTQ people that has been going on for thousands of years — all over the world. “Straight terrorism” hits us everywhere we live.

In one year alone in just 25 countries there were 594 hate-related killings of LGBT people, the UN Human Rights Council reported last year. “The trans murder monitoring project, which collects reports of homicides of transgender people, lists 1,612 murders in 62 countries between 2008 and 2014,” The Guardian reported. That’s more than one transgender person murdered every two days.

Here are some names, just the tip of the iceberg: in 2008 a gang of men raped and murdered South African soccer player Eudy Simelane. The same year, Lawrence “Larry” King, a 15-year-old gay teen from California, was murdered at school by fellow students.

In May 2013, Mark Carson was murdered while walking down the street with his partner in New York. One month later, 18-year-old autistic gay teen Stephen Simpson was set on fire and murdered at his own birthday party. In August of that year Krill Kalugin was attacked in St. Petersburg for holding a pride flag. In April 2014, 25-year-old transgender woman Çağla Joker was murdered in Istanbul. This year, in April 2016, Xulhaz Mannan and Mahbub Tonoy, central activists in the Bangladeshi LGBTQ community, were murdered in Dhaka.

According to a report published by the Nir Katz Center Against LGBTphobia published ahead of pride month, 380 cases of LGBTphobia were reported in Israel — in the 10 months prior to the report’s publication. Nineteen percent of the reported cases dealt with physical harm, eight were cases of threats, 40 cases were of verbal assaults and humiliating treatment, and seven cases involved threats made over social networks. It is spine-tingling to cite data published by a center established following the horrendous Bar Noar murders in Tel Aviv, in which Nir Katz and Liz Troubishi were murdered, and for which the killer has still not been brought to justice.

We would imagine that there isn’t an LGBTQ person in Israel who doesn’t feel that the Bar Noar murder is still an open, stinging wound. We are all still trying to recover from the murder of Shira Banki at the Jerusalem pride parade last year. Clearly there is no gay man, lesbian, bi-, trans or queer person, and their friends and allies, who didn’t feel like they had also been shot today. Our sisters and brothers are murdered on a daily basis all over the world.

We’re not going to address the ethnic origin of the murderer in Orlando, or the question of ISIS or whether he visited radical Islamist websites before he decided to go and massacre a club full of LGBTQ people. It doesn’t matter exactly which religion made him hate us to death. Sometimes it’s Christianity, sometimes it’s radical Jewish extremists, sometimes it’s Islam. It’s always the fear of those who are different, those who challenge the existing order.

The Jerusalem March for Pride and Tolerance, dedicated to the memory of Shira Banki, will be held on July 21, 2016.

Yael Marom is Just Vision’s public engagement manager in Israel and a co-editor of Local Call, where this article was originally published in Hebrew. Ma’ayan Dak is a queer activist.