Without any compunction, the Beit El Yeshiva was even willing to defraud settlers. 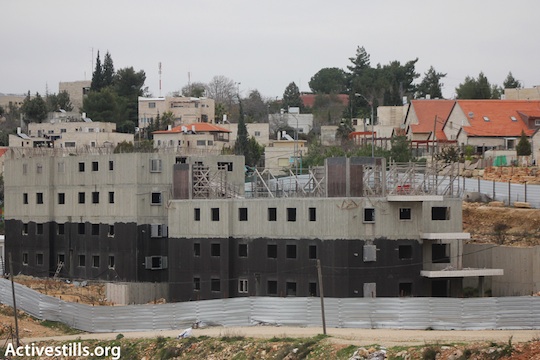 When the Ulpana Hill neighborhood in Beit El (whose proper name is Jabl Artis, privately owned by the residents of Dura Al Qara) was evacuated, the settlers began a loud campaign saying Yesh Din’s petition led to their removal from legally purchased homes. The court nevertheless ordered the evacuations, unimpressed by the unsubtle intimation that the fact that the land actually belongs to Palestinians does not matter all that much. The government of Israel took the questionable (not to say delusional) step of checking the possibility of physically removing the houses and placing them elsewhere. Had this step been followed through, and the government did begin implementing it (Hebrew), it would have cost some NIS 150 million.

As time passes we learn more about the behavior of the Beit El Yeshiva, one of whose residents owned the company responsible for selling the houses on Ulpana Hill. Indeed, the Yeshiva is entirely responsible for the fact that people purchased houses on Jabl Artis’ land. Needless to say, the government was in no hurry to carry out an investigation, or vigorously pursue the criminal process. Let us be clear here: we are opposed to all sorts of settlements, be they “recognized” ones or illegal outposts; both kinds, as far as we are concerned, are a greenhouse for the violation of human rights. But what happened on Ulpana Hill ought to give pause to those honest supporters of the settlement enterprise.

In 2012, Haaretz’s Chaim Levinson exposed that during his police interrogation, Yoel Tzur, the CEO of the Company for Developing Beit El’s Yeshiva Complex, admitted that he knew construction was carried out on land whose purchase was at best unfinished and, at worst, never made. This was in direct contradiction to the settlers’ claim that the land was legally purchased. Tzur was also forced to admit in his interrogation that he did not check the legal status of the land, and that he began construction without permits.

About a month ago, Levinson also exposed that documents from the World Zionist Organization’s Settlement Division were fabricated in order to whitewash the sale of 250 apartments in Beit El. This way, the yeshiva sold the apartments without informing the buyers that it had no rights to the land. Levinson reported that the yeshiva paid about NIS 1 million to two families to whom it sold the apartments. However, a representative of a third family looked at the document and found out that its house was listed as a part of plot 373, which was not even located on Ulpana Hill. The yeshiva sold three apartments and rented dozens of others. In other words, someone fabricated documents to defraud buyers and renters.

The residents of the former neighborhood know they were conned, and as Israeli news site News1 revealed (Hebrew) their anger. News1 published another piece (Hebrew) which exposed a fraud of a nearly biblical scale: settlers removed from Ulpana Hill will soon begin paying rent for their prefab mobile homes. Rent will be paid not to the government but to the entity that cheated them in the first place – the Beit El Yeshiva. Have you robbed and also taken possession?

We’ve known all along that the entire settlement movement is based on lies. It turns out that in order to find people to populate the settlements, leaders in the “movement” are willing not only to disinherit Palestinians, bend the laws or attempt to lie to the courts. They are also willing to mislead their own people.

A few words about the Company for Developing Beit El’s Yeshiva Complex: as Levinson discovered, the company is a subsidiary entity of a company registered in the Marshall Islands. Why would good Zionists who believe in “settling the land” register a company there, of all places? Well, because corporate law is notoriously fluid there, and you can hide the identity of the company’s owners. The chief rabbi of the Beit El Yeshiva is one of the most important leaders of the settlement movement, Rabbi Zalman Baruch Melamed. He is also the rabbi of the settlement of Beit El, and the spiritual leader of Tkuma, the relatively extremist element of the Jewish Home party. Melamed is a member of the board of directors of the Company for Developing Beit El’s Yeshiva Complex.

All of this almost made the headlines recently (Hebrew), when during the local elections, two of the those involved in the fraud – Hanoch HaCohen-Piuterkovski and Ehud Yelink – were candidates in the Beit El elections. Why “almost”? As noted by Israeli media watchdog site The Seventh Eye, an investigative piece prepared by the newspaper Makor Rishon was suppressed by its legal editor, Yehuda Yifrakh – whose name you may remember from another journalistically dubious affair. In an article he wrote in order to explain killing the exposé, Yifrakh said, “the essence of the argument was that two candidates for the leadership of some local council were involved in false registration and in hiding vital information from residents, and by doing so they defrauded several families and caused them significant financial damage.”

Sounds interesting. So, why did you kill the piece, Yifrakh?

As Uzi Benziman of The Seventh Eye justly noted (Hebrew), the deciding factor as far as Yifrakh was concerned was “considering (not to say identifying with) the ideological aspect, which is the key to understanding the improper behavior of the two people reviewed and in retrospect also its ultimate justification. Journalist Yifrakh thereby gives legitimacy to behavior he himself considers to be improper. After all, were there not a real fault in the behavior of the two, there would be no place for a journalistic exposé about it, nor a cause for the indignation of the settlers in the face of damage they suffered as a result of that behavior. And there would be no need for a drastic intervention on behalf of the state’s authorities to amend the fault, as in fact happened.”

The ideological criminality of the Beit El Yeshiva has, then, a media bull horn – or, rather, a silencer – who is willing to overlook violations of the law, even if they harm people, even when those people are Jews and comrades, in order to promote or at least remove obstacles from the path of that ideology. This should be borne in mind when Yifrakh writes once more about the legal status of the settlements.

Beyond that, the people who were harmed due to the dishonesty of the Beit El Yeshiva – at which the Civil Administration hinted even when it seized the land for Beit El in 1979 – should be told clearly: your fight is not with the human rights organizations, it is with the people who misled you and cheated you. And they, what can we say, are in your own home.

All that being said, and bearing in mind the tendency of the Beit El Yeshiva to be economical with the truth and deceitful towards its comrades, we should remind you again of a basic truth: the real injustice was not suffered by those naïve or conveniently blind people who bought or rented apartments from the Company for Developing Beit El’s Yeshiva Complex (when was the last time you bought an apartment without seriously looking at the paperwork?). The real victims of the affair are the Palestinians whose land was stolen with the help of the state, so that the Yeshiva can run its profitable business and redeem the land of the people by highway robbery.

They, unlike the settlers turned victims, were never compensated.