It was news when tens of thousands of Israelis took to the streets in protest over housing prices. So where was the media in February when dozens of Israelis—facing not unaffordable apartments but eviction and homelessness at the state’s hands—managed to shut down several busy roads using nothing more than their bodies? 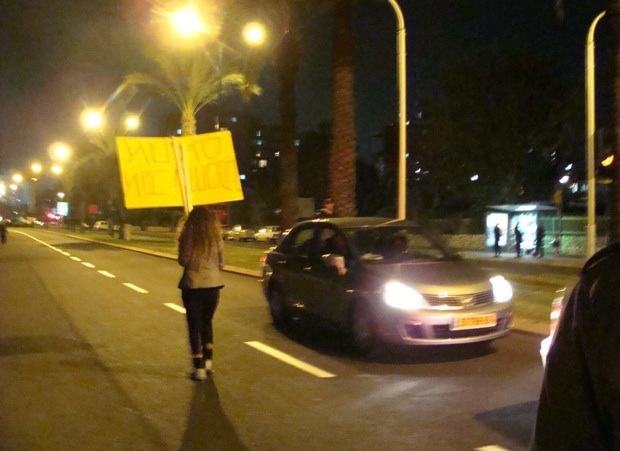 Both the tent camps and the winter demonstration are the result of the state favoring the interests of an elite oligarchy and settlements over those of citizens who live inside the Green Line. But the latter, smaller protest took place in Kfar Shalem, where housing issues have deep historical roots.

Now an economically depressed neighborhood of South Tel Aviv, Kfar Shalem was once a Palestinian village, Salame. Jewish forces ran the Arab residents out in early 1948, months before Israel was established and (what some refer to as) the War of Independence began.

The young state gave the empty Palestinian homes to impoverished Mizrachi Jews. The idea, some residents of Kfar Shalem admit today, was to discourage dispossessed Palestinians from returning. The Jewish occupants were to “guard” the houses.

These new residents also created facts on the ground and, after the 1948 War, the municipality of Tel Aviv annexed Jaffa and Salame—both of which were destined for a Palestinian state under the partition plan approved by the UN in November of 1947.

By the early 1980s, it seems, the Mizrachi residents of Kfar Shalem had outlived their usefulness. The Israeli government began to evict some, demolishing their houses to make way for more profitable investments. In 1982, Shimon Yehoshua was killed by Israeli police as he tried to defend his property.

Some thirty years after Yehoshua’s death, residents of Kfar Shalem are still struggling to hold on to their homes. Many of those facing eviction also face homelessness. The story is the same in Jaffa, where both Jewish and Palestinian families are threatened.

In February, I reported on the issue for Al Jazeera English. (The piece was titled “House evictions forge new alliances.” Change the second word to “prices” and you’ve got a headline you can use today). Interviewees were upset with the government, of course, and that’s what I focused on.

But here’s what I didn’t have room for: many of the Jewish Israelis I interviewed were upset with their fellow citizens for not doing more to help them in their battle against homelessness. Some also expressed frustration with the Israeli left because they felt that such activists reserve their sympathies only for Palestinians and foreigners.

Intense, deeply personal interviews—which spanned hours and became conversations over coffee—left me with some new friends in Kfar Shalem. So when they took to the streets to protest, they called and invited me along. 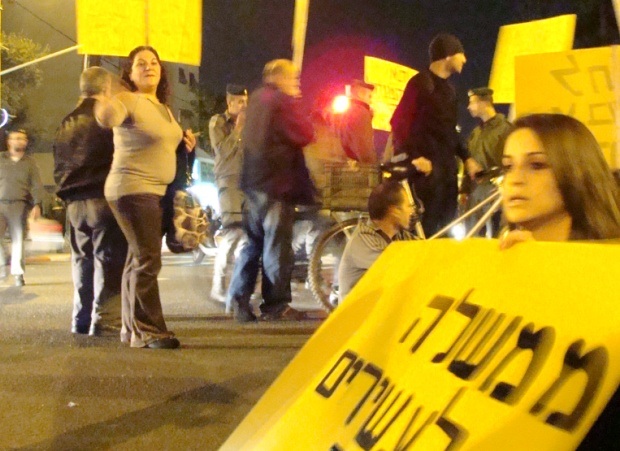 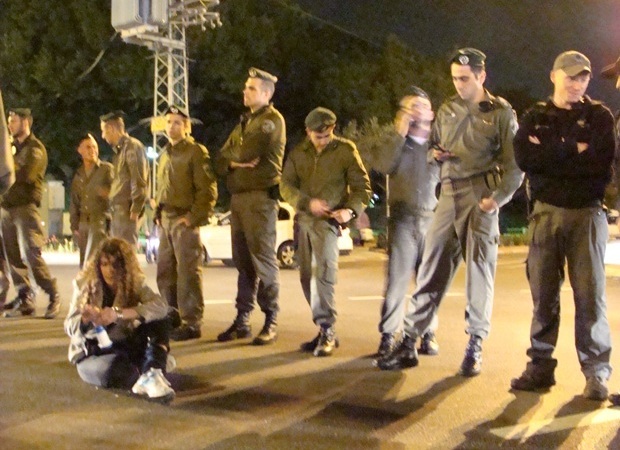 That cold winter night, the residents of Kfar Shalem marched out of the neighborhood and sat down in the road. As cars honked and the police scrambled to divert traffic, the protesters asked each other again and again “Where is the media? And where are the left-wing activists?”

“It’s a pity that we’re not foreign workers,” one man said, referring to the attention that deportation of migrant laborers and their children had received in the news.

My personal opinion? Confronting problems in places like Kfar Shalem is too complicated for the media and activists alike. Talking about the occupation is somewhat easier because it allows for externalization of the conflict (“It’s the settlers!”) and that longstanding slogan: “Two states for two people.”

Kfar Shalem is messier. It’s about 1948. It’s about internal class struggle and divisions and inequalities between Mizrachim and Ashkenazim. For some activists on the far-left, it can open up the difficult question of supporting people who live in the homes of dispossessed Palestinians. For the Zionist left, a place like Kfar Shalem forces consideration of ethnic cleansing in Israel’s history. It might make those of us who live within the Green Line wonder if we aren’t another kind of settler.

Marsela Edri is a 56-year-old grandmother who traveled from Ashdod to join February’s protest in Kfar Shalem. She was there, in part, out of concern for her own fate, she explained. “What if something happens to me? I have two sons: one is married; the other lives with me at home. And if [the state] will throw us out of the house, who will come and stand in solidarity with me?”

As she stood in the middle of an intersection, she offered her own theory as to the low turn-out and the lack of media coverage.

“There are too many protests,” she said. “Everyone needs to stop making protests for a month. We need to get organized—to sit and talk and to pick one time, together, to go out to the streets.”

“The moment it begins,” she added. “I believe it won’t stop.”

The tent protests have brought together groups who wouldn’t ordinarily attend the same demonstrations and it has motivated people who don’t usually protest at all. But, so far, it has not become that massive march that will bring about far-reaching political change. Why? Because it misses the big picture that is so obvious in Kfar Shalem: the connection to the Palestinians; that privileges afforded to a select few means forsaking rights and dignity for the masses; that a state founded on dispossession and forged in occupation is sure to have little regard for its own.

Some of my friends and acquaintances have expressed disappointment in the apolitical nature of the current protest over housing. Some have refused to join the movement because it has failed to make the connection to the occupation and other political issues.  One friend told me that he finds the protests, “silly and self-centered.”

I see his point. But I also see a country with an increasingly intolerant atmosphere, where it has become taboo (and, in some cases, illegal) to speak out against the occupation. The tent protests and the cottage cheese boycott represent, perhaps, some of the few “acceptable” causes Israelis can rally around without being chastised or called “traitors.”

And whether the tent camp organizers realize it or not, it’s no coincidence that this protest comes on the heels of the anti-boycott law.

As Dov Khenin said at a talk he gave in February on the dangers of fascism, “In Israel, there is a specific democratic space. It’s not big and in connection to the Arabs, it’s even smaller, but the space is important to us because it’s the space we’re standing in.”

“What has happened in recent years is that the space is being attacked and clamped down upon from two directions. One of the attacks is coming in the form of racism,” he said, pointing to the Nakba Law and other anti-democratic legislation that is intended to stymie support for the Palestinians. He added that Jews who “think differently” are facing persecution, as well.

“We’re paying less attention to the second form of attack…tycoons and oligarchs and the group of capitalists who rule the economy in a concentrated way.”

But recently—between the cottage cheese boycott and the tent protests—tens of thousands have begun to look at exactly these issues.

The tent protests represent a brave first step towards a more democratic space. But Israelis still need to open their eyes and see the bigger picture. They need to acknowledge that the state’s policy of expansion has bled the country dry, financially and morally. They need to understand that the 1967 war and the occupation that began soon thereafter do not exist in a vacuum—these events are connected to those houses in Kfar Shalem, homes that were once Palestinian, are now Jewish, and, if the state has its way, will be bulldozed for business interests.

The moment Israelis open their eyes, the moment they understand what’s really going on around them, they’ll be unstoppable.