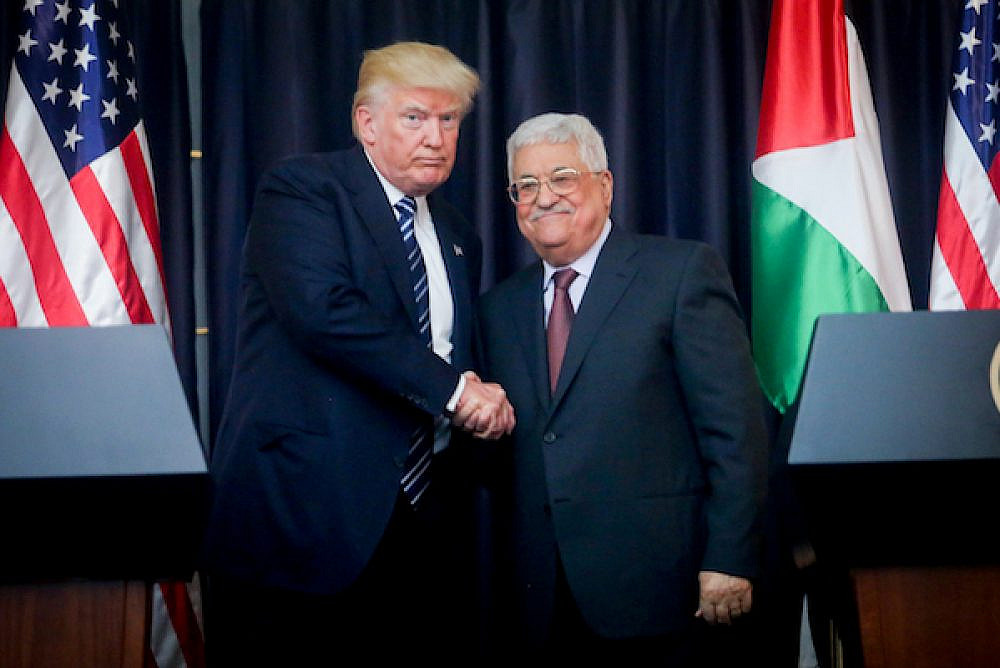 It would have been a startling assertion had it not been heard before. Two weeks ago, Benjamin Netanyahu declared that he would not be evacuating any settlements in the West Bank. “We are here to stay, forever,” the Israeli prime minister said at the settlement of Barkan. “We will deepen our roots, build, strengthen and settle.”

There are approximately 500,000 settlers in the West Bank and East Jerusalem today, and their evacuation is a principal tenet of any likely solution to the conflict. The last time peace talks between the Palestinians and Israel broke down in 2014 it was mostly over settlements. At the time, Secretary of State John Kerry was deeply invested in the process, and Palestinian President Mahmoud Abbas had relayed several demands to facilitate his engagement with the Israelis.

But Abbas didn’t get anything he asked for, including the basic understandings about negotiations that Palestinians considered a minimum. His call for a settlement freeze was turned down for a “major slowdown.” When he asked for basing the talks on the 1967 borders, Kerry said he could only support that position in writing. And yet despite how little he was offered, Abbas told the broader Palestinian leadership that he would support resuming negotiations nonetheless.

Netanyahu’s support for settlements is longstanding. His most recent comments came on the heels of Israel’s marking 50 years of settling in the West Bank, just days after President Donald Trump’s advisor and son-in-law, Jared Kushner met with him and Abbas separately.

The meeting between Kushner and Abbas yielded the usual results: an assurance that Trump wanted to secure a “lasting peace” between the two parties, vague references to the importance of direct negotiations, and an assertion that peace would take some time to reach. Abbas had heard it all before, and his frustrations at the lack of clarity began to boil over in the following days.

His exasperation was made clear when he told a visiting delegation from the Meretz party: “I have met with Trump’s envoys about 20 times since the beginning of his term as president of the United States. Every time they repeatedly stressed to me how much they believe and are committed to a two-state solution and a halt to construction in the settlements.”

He did not mince his words, and his desperation was palpable. “I have pleaded with them to say the same thing to Netanyahu, but they refrained,” Abbas continued. “They said they would consider it but then they didn’t get back to me.”

Ever since Abbas was voted president 12 years ago, successive U.S. administrations have made similar promises. Envoys and delegates came to Ramallah and went, and many peace plans were heralded with absolute certainty. The only difference is that Trump’s plan remains a mystery, which ironically was a source of brief optimism for the Palestinians. The Palestinian leadership initially viewed Trump’s ad hoc style as an opportunity to stop the new administration from kicking the can down the road as its predecessors had done.

But that ray of hope was soon extinguished when Abbas began to realize that the current administration would not even commit itself to the two-state solution, the hallmark of the decades-old U.S.-sponsored peace process.

Just recently, State Department Spokeswoman Heather Nauert said a recommittal by the Trump administration to the two-state solution would show “bias” to one side — perhaps an admission that the Israeli government has dropped the pretense of negotiating a peace deal based on two states.

Abbas has also become aware that the company Trump keeps — Kushner, the American ambassador to Israel David Friedman, and special envoy Jason Greenblatt — all have deep personal ties to Israel (and even settlements) and have not been shy about expressing their support for it.

Just last week, in a marked break from standard language used in U.S. diplomatic protocol, Friedman called the occupation of the West Bank and Gaza “alleged.” Greenblatt has previously stated that he does not view settlements as an obstacle to peace, and Kushner’s family has in past years donated to the Beit El settlement.

Meanwhile Abbas is finding himself in the dark with no solid clues given to the U.S. president’s proposed peace plan. According to an Israeli media report, the Americans reportedly asked for a “grace period” to put a plan together.

But as the Trump administration works out its “ultimate deal,” the Israeli population in the West Bank continues to grow: just one day before Kushner’s visit, Israel announced the first new settlement in two decades. After he left, authorities announced they were moving ahead with plans to build 7,000 units in East Jerusalem settlements.

Amid this flurry of uncertainty and doubt, Abbas has bent over backwards to show his new American interlocutors that he is all in. The latest was a series of sanctions he imposed on Hamas, the rulers of Gaza, that included cutting payments to Israel for electricity provided to the coastal enclave, leaving Palestinians with roughly four hours of power a day. He also slashed the salaries of hundreds of thousands of public employees and withheld permits needed for patients to leave Gaza.

As U.S.-led negotiations are the only game in town for the Palestinian Authority, Abbas doesn’t have many choices available. But according to those close to him, he is unsure about how to proceed given the goal posts have been moved once again. “If we don’t know where we are heading, if we don’t know what the end game is, then we are in a desert without a map,” said Mohammad Shtayyeh, a senior adviser to Abbas. “We have seen it happen before. We are not going to see it happen again.”

Without even a pledge of support from the Americans for a Palestinian state or a demand to Israel to halt settlement-building, it’s easy to predict how the discussion at the UN General Assembly, convening in mere weeks, will play out. With dwindling support among Palestinians, and rising anger at the political stalemate, Abbas will have to revive his previous threat to head to the International Criminal Court or to ask the UN to recognize a State of Palestine. Washington will try to avert both situations, and the Haaretz daily recently reported that Trump will meet with Abbas and Netanyahu on the UNGA sidelines precisely to do that.

“The Americans said they need more time to draft something and asked Abu Mazen not to make international moves like joining additional UN agencies or launching proceedings at the International Criminal Court in The Hague,” a Palestinian official said to Haaretz, using Abbas’ nom de guerre.

In the meantime, Abbas and his inner circle will likely just play along, kicking the can down the road even further themselves, as Israel cements its grip on the West Bank and its siege of Gaza. The 82-year-old Palestinian president will try to escape the next four years without being pressured into giving up even more, not daring to take the consequences that he knows come with a refusal to negotiate at all under new parameters.

This article was first published at Lobelog.com.

Dalia Hatuqa is a journalist based in Washington, DC, and the West Bank.