The government decided to lift the civil siege of Gaza in 2010. The Ministry of Defense didn’t get the memo

On June 9, 2011 MK Zahava Galon (Meretz) sent a query to Defense Minister Ehud Barak. Galon wanted to know why Israel prevented women from leaving the Gaza Strip to Tulkarm, where they were supposed to participate in a workshop of the Palestinian Trade Union of Hair Stylists, and asked what Israel’s policy towards Gazan women is as a whole. She noted that since Israel only allows major traders to leave the Strip, and as woman in Gaza are generally small-scale businesswomen, the prohibition constitutes de facto discrimination against Gazan women. She asked the following questions:

1. Why does the IDF continue to implement a policy that discriminate against Palestinian women, which is in line with Hamas’ policy against women?

2. Why won’t the IDF adopt a uniform policy which will allow Gazan women to go to the West Bank for business or other reasons promoting their status in Palestinian society?

3. How does the current policy serve Israel’s position that it wants to undermine Hamas’ rule of the Strip?

4. How many exit permits were given to women from Gaza, and how many to men from Gaza over the course of the last year, for the purposes of business?

According to the Knesset’s regulations, a minister must respond to a query within 21 days, though he can ask for a delay of an additional 21 days. Galon’s question was submitted in the beginning of June. She told me that the Ministry of Defense – it’s not alone, but it’s known for this sort of abuse – has a policy of evading parliamentary questions. Galon had particularly harsh words for the way the Ministry behaves when it comes to urgent requests by MKs; often they only receive an answer when it is no longer relevant.

In this particular case, Galon did receive an answer. Admittedly, it came on January 1, 2012, about six months after it was submitted. Admittedly, it was not signed by the Minister of Defense but rather by Matan Vilani, the factotum who holds a position that has never been held before – he is a “Minister for the Defense of the Homefront” – which was evidently made out of whole cloth to provide him with a sinecure. But an answer was received.

Alas, it contradicts the government’s official policy on Gaza. Vilnai, writing in place of Ehud Barak, in his position as clerk for I-don’t-have-the-patience-for-these-affairs, wrote that “on 19/9/2007 the Policy Cabinet decided […] that the Gaza Strip is a ‘hostile territory,’ and that it shall be under severe limitations in the civil sphere, including the moving of people from the Strip and into it. In accordance with this decision, grounded in security and political reasons, the entry of Palestinians from the Gaza Strip to the territories of the State of Israel is forbidden, unless in urgent humanitarian cases […] Yet we emphasize that the IDF and the COGAT [Coordinator of Government Activities in the Territories, and IDF general – YZG] do not have a policy that discriminates against women in leaving the Gaza Strip, for business or for other reasons, everything [is being done] in accordance with the current policy.” [My emphasis]

However, this comment by Vilnai, the Minister for Receiving a Ministerial Salary Affairs, contradicts a public statement by the Dear Leader himself, Binyamin Netanyahu. In July 2010 – that is, about six weeks after the Mavi Marmara attack – Netanyahu proclaimed that the “civil siege damages the security siege,” and said (Hebrew) that he ordered it lifted. Netanyahu also admitted he considered lifting the civil siege – which he attributes to the 2007 Olmert government decision cited by Vilnai – even before the flotilla events, but somehow, he never got around to it. In that interview, Netanyahu also complains that the world treats his government’s claim that it lifted the civil siege off Gaza with skepticism. I can’t imagine why. Possibly this skepticism derives from the actual policy of the Ministry of Defense and its penny-ante redundant ministers.

Note that Galon’s question was about passage from Gaza to the West Bank; Vilani’s reply was about entry into Israel. This is not the result of the fact Vilnai was never the sharpest herring in the drawer. Entering Israel is essential to movement from the Strip to the Bank, unless the Palestinian is expected to go to Egypt, travel from it to Jordan, and then cross from there to the West Bank. This is Israel’s new excuse for its Separation Policy (mediniut ha’bidul, in Hebrew) that disconnecting the Strip and the Bank. Anyone entering Israel from Gaza has already passed a stringent search. All the IDF has to do is send every morning one or two buses from the Erez Crossing to the West Bank, along with two or three soldiers to watch over them. It doesn’t. The excuse of “prohibition from entering Israel” is too easy. 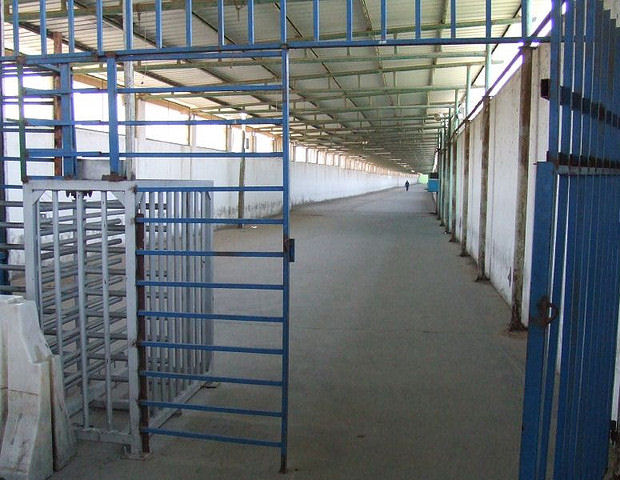 Security checks are mandatory before crossing into Israel. The Erez Crossing between Gaza and Israel (Photo: Olly L, CC BY 2.0)

In case anyone thought there’s any logic in Israel’s policy of travel permits between the Strip and the Bank, he should have a look at the table usefully assembled here by the Gisha NGO. It’s in Hebrew, so I’ll summarize.

Who pays the price for the Separation Policy? Orphans living in Gaza who have lost one parent, and whose other parent lives in the West Bank. If they have a “close family relation” living in the Strip, they’ll never be united with their parent. The Guardian of Israel shall not sleep, nor shall he wink; he will not allow the horrid danger of an orphan living with his surviving mother to materialize. Who pays the price? Gazans who want to embrace a brother who lost a son. Mind you, the Gazan is only considered dangerous as long as the dead relative is a nephew; were his brother to die, he would, in the blink of an eye, shed all of his inherent dangerousness and be transformed into a trustworthy Palestinian, and be allowed to travel to the West Bank. Who pays the price? Poets, who – unlike soccer players, for instance – can’t travel from Gaza to the Bank. And this is right and proper: poets ought to be feared. They are the ones who will weave despair and rage into a tapestry which will, eventually, overcome fear.

Keep that in mind, when an Israeli official next spouts the nonsense that “Israel doesn’t control the Strip.” We accept this abomination daily, out of ignorance and the will not to make waves. We supply the abomination with its guardians. We are the ones allowing freeloaders like Vilnai to cover it with a mass of harsh, indigestible security-talk, falling on the ground like hail. We keep this policy alive – and, if there is justice in the world, will also pay the price.