Sadiq al-Sadiq says he never agreed to return to his home country, where he fears persecution. Israeli authorities, however, say he signed a document agreeing to just that.

A Darfurian asylum seeker who left the Israel last week under the assumption that he was going to a third country — but soon found himself being sent back to Sudan — was returned to Israel on Friday. Activists said that his return to Israel took place against his will, and that he was being held in an immigration holding facility near Ben-Gurion Airport.

+972’s Hebrew-language sister site, “Local Call,” first reported on Sadiq al-Sadiq’s case two days ago. Israeli librarian Daphna Lichtman, who knew Sadiq from her work in south Tel Aviv, unexpectedly ran into him at the Adis Ababa airport, where she herself had a layover between flights. When she heard his story she immediately published it on Facebook, where it began to receive attention back in Israel. 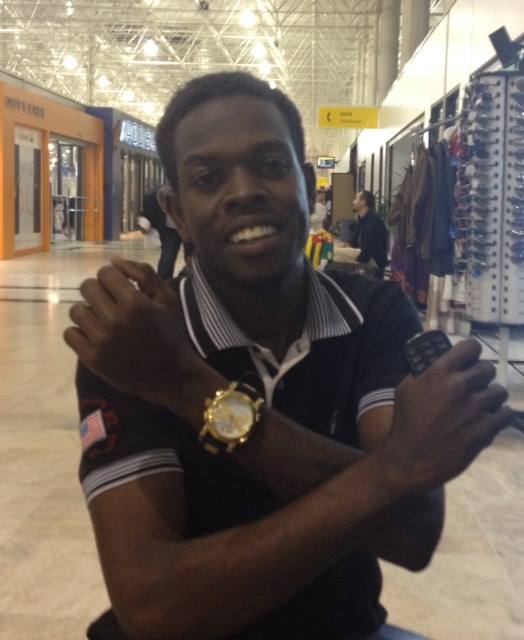 Last Wednesday (April 30), Immigration Authority officers came to pick him up from his house and take him to the airport. He wasn’t told the name of the third country to which he was being deported… [Only when he got to the plane] did they tell him that it was Ethiopia. When he got to the airport in Ethiopia and asked to go into the city in order to begin his new life, an Ethiopian immigration agent informed him that he was not permitted to leave the airport and that in a few hours, he had a connecting flight to Sudan.

Sadiq refused to be sent back to Sudan, where he fled persecution. According to Sadiq, when he left Israel he only agreed to go to a third country where he understood he would receive protection. He says he felt misled by Israeli immigration authorities, who claim he agreed to voluntarily return to Sudan.

It is not clear whether the document Sadiq signed in Israel was in English, Arabic or Hebrew.

Later in the week, Ethiopian authorities took Sadiq — who had been roaming around the airport for over a week — into custody and told him they were sending him back to Israel, which he did not want. Calling Israeli activists from passenger’s phone on the plane back to Israel, Sadiq said he feared imprisonment. Upon arrival he was brought to the immigration detention facility near Ben-Gurion Airport, where he is currently being held.

Attorney Asaf Weitzen of the Hotline for Migrants and Refugees told “Local Call” that he spoke on the telephone with Sadiq from the Israeli airport detention facility. “There is a lot of work to be done here and it’s a little early to share that with the media. Among other things, we’ll have to clarify how this — which [could be] a mistake or deceit — took place, and whether Sadiq also wants to fight it legally.”

Population, Immigration and Borders Authority spokesperson Sabin Hadad responded to a request for comment by “Local Call”: “Most of the facts in your request [for comment], certainly including the very basis of the article, are mistaken. Mr. Sadik left Israel voluntarily, after signing a document [attesting to] his consent, and [according to which he would] receive a stipend. He chose — and signed off on — to leave for his country of origin (Sudan) and not to a third country; all of the allegations are fabrications.”

“When he arrived in Adis Ababa, the transit country for his flight, it appears that he chose not to continue on his way and remained in Ethiopia,” Hadad continued. “When the matter was brought to the attention of the [Israeli Immigration] Authority, it was dealt with and we coordinated his return flight to Israel. It is not clear what facts he is telling but they aren’t aligned with reality. Upon his arrival in Israel, [his case] will be dealt with by the Authority, in accordance with the law.”

Read a version of this story in Hebrew on “Local Call” here.