Young Palestinians are mourning the loss of two young artists from Gaza, a writer and an illustrator, both of whom represent Gaza’s lost generation, trapped by the hopelessness of Israel’s siege. 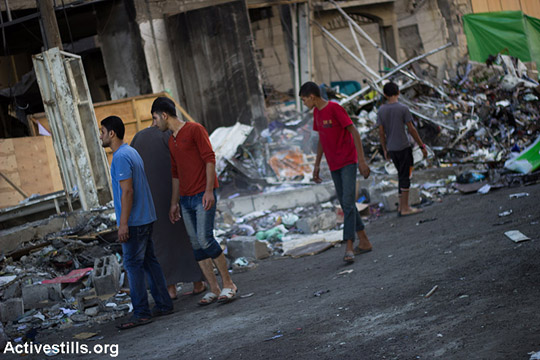 Tragic news spread among youth in Gaza last week: Mohanned Younis, a young writer, just 22 years old, took his own life. Younis, who had graduated from a pharmacology program, wrote short stories. Some of his stories won prizes, and one was most recently nominated for the A.M. Qattan Foundation literary prize. He had tried on numerous occasions to leave the Gaza Strip in order to advance his writing career, to fulfill his dreams. In much of his writing, he touched on the depressing reality in Gaza, which he described as unbearable and not survivable — a feeling which is apparently shared by many other youth in Gaza.

According to the Facebook page of “We Are Not Numbers,” which encourages youth in Gaza to tell their stories, Younis is just the latest suicide among youth in Gaza. When the unemployment rate for people under 30 stands at 60 percent; when the possibility of leaving Gaza to study elsewhere, to develop oneself, and certainly just to travel, has been reduced to almost zero; when the lack of electricity makes the most basic daily tasks unthinkably difficult; when there is a military attack, destruction and killing every few years; and when the prospects of hope and opportunity appear further and slimmer than ever — tragic outcomes are almost unavoidable.

News of Younis’s death was joined by another piece of tragic news this week: illustrator Moath al-Haj, 30, was found dead in his Gaza home. Al-Haj, who was orphaned at a young age, was well known among young, educated Palestinians for his sharp and expressive illustrations, in which he used clean lines to demonstrate the difficulties of his life and the situation in Gaza, primarily among the youth. His death led to impassioned discussions on social networks and many people attributed his death to the heartbreak of his life circumstances.

Forty-two percent of the population in Gaza is under the age of 15. That is an entire generation whose dreams and aspirations, talents and capabilities are trapped between the fences and checkpoints of Israel’s illogical and unjust policies and siege. I never met Mohanned or Moath but I think it’s only right to spread the messages of hope and ambition that both of them articulated through their art. There are many more like them: writers and illustrators, musicians and dancers, athletes and caricaturists, inventors and poets.

Freedom of movement is a basic right bestowed upon every human, and a fundamental necessity for young people who want to realize their aspirations. They need to be allowed to leave the Gaza Strip, and to return to it. Others need to be allowed to enter the Gaza Strip in order to meet them. The siege must be lifted. They must be allowed to meet with other talented young people just like them, in all of Palestine and around the world. Those types of encounters, those types of opportunities for growth and development create hope — not just for them but for young people throughout the region. Ending the siege and ending the occupation can make that happen.

A drawing by Moath al-Haj (Caption: “Smile: Maybe war will be ashamed!”: Qamar Taha is a research coordinator at Gisha, an Israeli non-profit that works to protect the freedom of movement of Palestinians, especially Gaza residents. The views expressed in this article do not necessarily reflect those of the organization. This article first appeared in Hebrew on Local Call. Read it here.