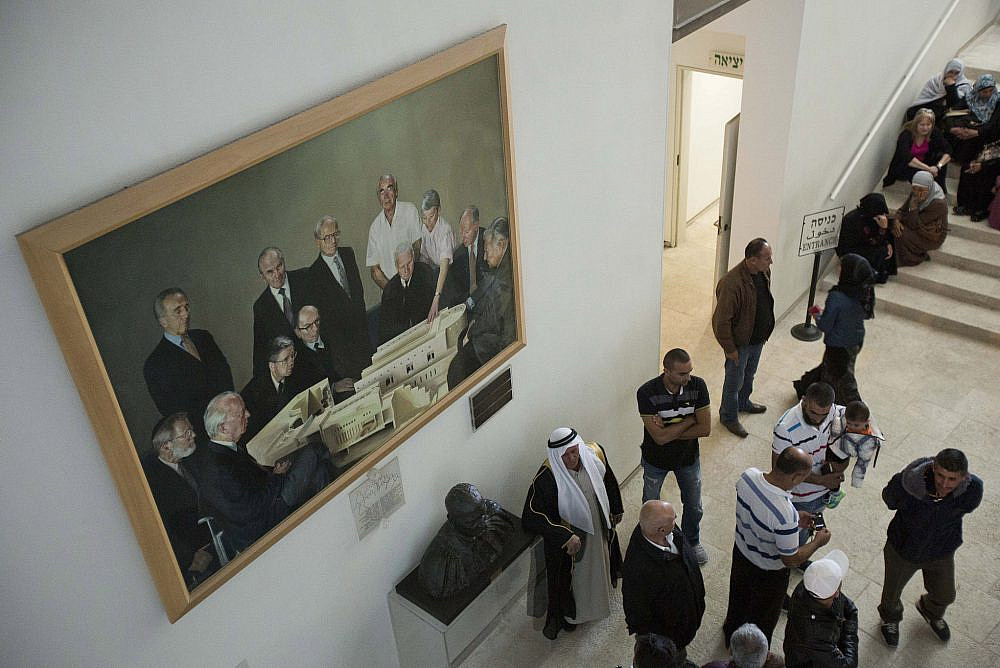 Last week’s Israeli Supreme Court ruling, which permits the government to forcibly transfer the Palestinian community in Firing Zone 918 in the Masafer Yatta area of the occupied West Bank, has reignited the age-old debate among leftists and human rights activists in Israel: should we petition the Supreme Court over violations of the rights of Palestinians living under occupation?

Comments made on social media, including by lawyers who have represented Palestinians at the Supreme Court for many years, suggested that the time has come (and is perhaps overdue) to boycott Israeli courts, and to refrain from petitioning their judges either to remedy or protect from harm done to Palestinians.

This is a well-worn argument, and the activist community in Israel-Palestine was not the first to raise it. Such debates have been taking place among human rights activists around the world for decades — in apartheid South Africa and in the United States during the Vietnam War, for example — and continue today, from India to Russia.

Activists opposed to the status quo — especially in repressive, occupying, apartheid, ethnocratic, or totalitarian regimes — almost always have to contend with the reality of a submissive legal system that collaborates, and sometimes even identifies with, the crimes of its government.

The political question of whether to engage with the judicial system of a repressive government is, therefore, an important and fascinating one, although it only arises in places where there is a realistic chance of something being gained from litigation. For there to be a dilemma, one must be facing a system that does, on occasion, grant some form of relief, and the question is then whether it is worthwhile to continue to engage with it and pay the price of such engagement, or to give up on it altogether.

Gains, by the way, do not always come in the form of victory — that is, winning a case outright. Litigation might secure what could be termed “peripheral fruits”: accompanying benefits that in the long-term may provide significant assistance to the public struggle against a particular policy, but are not the direct relief sought in the case.

Any lawyer who has ever handled a case in which the chances of success are slim recognizes these accompanying benefits of human rights litigation. Often the hope, and even the strategy, is that it is these peripheral successes that will be realized. For example: time. 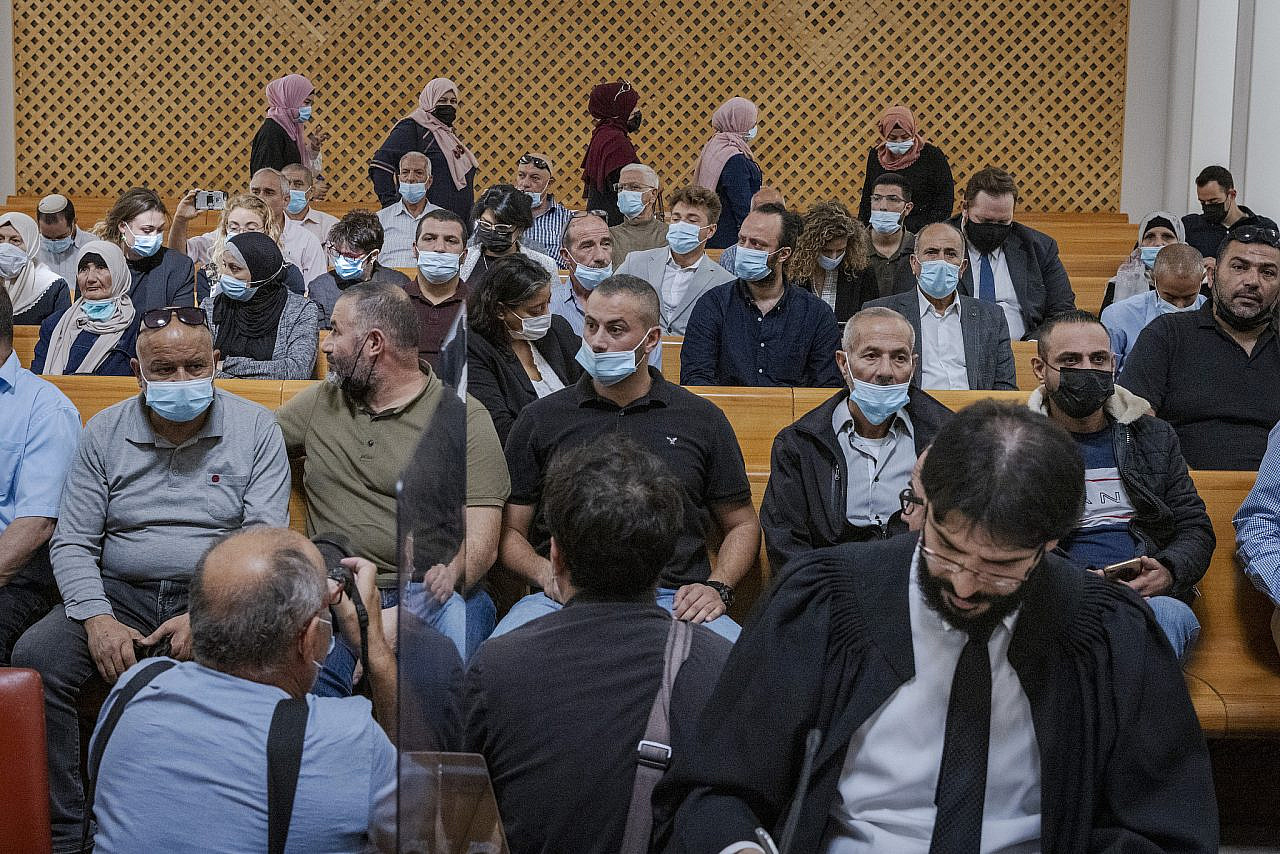 Palestinians attend a hearing regarding the forced expulsion of Palestinian families from their home in the Silwan neighborhood, Supreme Court, Jerusalem, October 25, 2021. (Olivier Fitoussi/Flash90)

Time is a very important accompanying benefit. Many litigations significantly postpone the carrying out of an unjust act or policy. The litigation challenging the expulsion of the Palestinian community of Khan al-Ahmar, in the occupied West Bank, lasted 11 years, until the Supreme Court ruled in the state’s favor. As for Susiya, in the South Hebron Hills, the same process took 17 years. The case involving Firing Zone 918 led to an interim injunction which allowed the communities to keep living on their lands. This injunction was in place for 22 years.

These long stretches of time allow for political organizing, mobilization of diplomatic pressure, and the securing of significant media coverage — none of which would be possible were the state’s plans carried out quickly. Susiya and Khan al-Ahmar are perfect examples of how time can make organizing and effective counter-pressure possible, which makes it especially difficult to carry out the planned forcible transfers even now, when all petitions against them have been rejected.

Another example of a side product of litigation is information. Litigation can expose a lot of details about a policy or practice, which can, in turn, be of use to a public or political struggle. Information can sometimes be worth its weight in gold in these fights.

Litigations can bear other fruit: a legal process can often deepen public awareness and grab the media’s attention regarding the subject under legal scrutiny; it is a process that drafts concrete arguments against the status quo and planned governmental acts, while also wording the alternative that should come in its stead, contributing to the manifest of the struggle; and it obligates the state to present a clear position which explains and defends its actions, and to account for it. These are all important tools in a struggle, which are rarely gained outside the courtroom.

To petition or not to petition

In the face of all this, those opposed to such lawsuits are mostly apprehensive about the legitimizing effect of bad court rulings; the faking of a semblance of due process and the provision of cosmetic appearance of non-arbitrariness to the governmental use of coercive force; and expending energy and resources into these lawsuits which could have been invested elsewhere. These are the political tolls of litigation.

So where do you end up when you weigh the costs against the benefits? What is the final balance? To petition or not to petition? Perhaps the highest price always mentioned in this context is the way in which the litigations might lead to rulings that legitimize the crimes. This raises a paradox: the more progressive the court is — that is to say, the more it is willing to confront the authorities and intervene on behalf of the victims of human rights violations — the greater the cost of losing in terms of legitimization.

On the other hand: the more passive the legal system is, the more it regularly rules in favor of the authorities and adopts their positions, so does the price of legitimization become lower.

This is an important conclusion: the danger of legitimizing the policy (and the regime) is especially high in legal systems in which the chance of securing meaningful victories are high. This doesn’t seem to me to be the situation in Israel. Even if the court has historically been held in high regard, those days have now passed in Israel and beyond, and certainly among those social circles that form the potential recruits to, and allies of, the struggle to end the occupation.

As for the extensive time and energy that litigation demands, it is clear that if there are alternative means of resistance that could bring about better results and remedies than Israel’s courts, diverting resources to those means would be justified. I admit that in many cases I do not know of more effective alternatives to litigation. 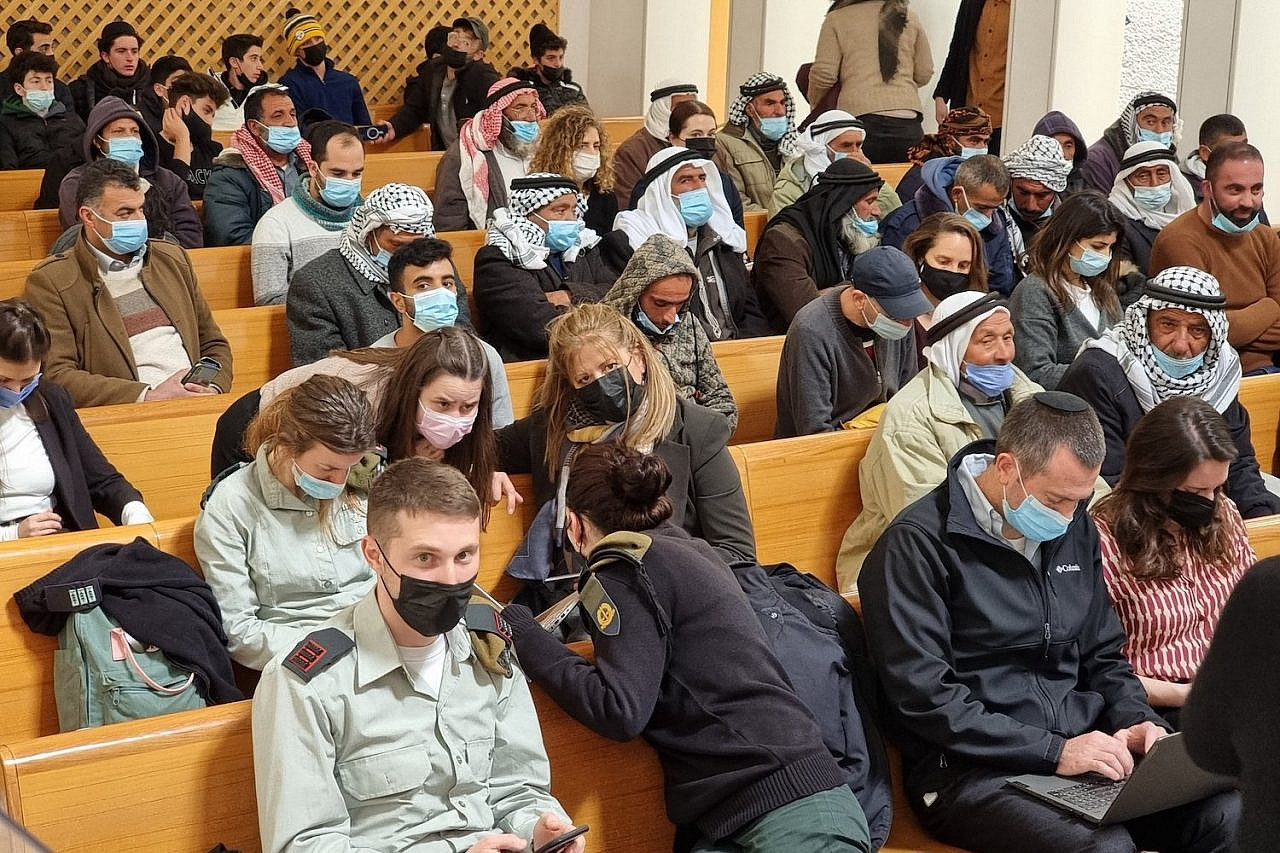 Palestinian elders sit among members of Israel’s Defense Ministry as well as left-wing activists during a hearing at the High Court on the fate of 1,300 residents of Masafer Yatta, March 15, 2022. (Yuval Abraham)

On the other hand, there are real human beings who are the victims of the actions such petitions try to prevent. From their point of view, there is little to lose from appealing to the courts. If a petition fails, what happens was going to happen anyway, only much earlier. That way, there is at least a chance of securing the time needed to organize a public struggle, to exploit the attention given to legal proceedings, and to make use of information — some of which can be critical — that those proceedings bring to light.

And sometimes, just sometimes, petitioners do win an outright victory, whether partial or — in rare instances — full, that prevents an injustice: striking down a ban on traveling abroad; limiting land grabs; securing access to agricultural land; canceling the “regularization law“; or evicting settlers from private Palestinian land, such as in the Amona and Migron outposts.

Does loyalty to human rights allow us at all to sacrifice the chance a person has to be spared expulsion, loss of income, or the dismantlement of a community, on the altar of a speculative calculation of the cost of legitimizing a repressive regime?

After all the calculations and assessments, it is not, ultimately, up to lawyers or NGOs to decide. The decision belongs to the Palestinians. It is they who must choose whether to make use of the occupier’s courts or to boycott them. In the meantime, thousands of Palestinians opt to take that chance each year. Be it out of lack of other options or out of distress, this is the choice they are making.

This article was first published in Hebrew on Local Call. Read it here. It has been slightly edited for clarity after publication.

Michael Sfard is an attorney who specializes in human rights law and international humanitarian law, and the author of ‘The Wall and The Gate: Israel, Palestine and the Legal Battle for Human Rights.’