The Supreme Court gave the state a green light to continue walling in a village split between Israel and the Palestinian Authority, blocking the villagers on all four sides 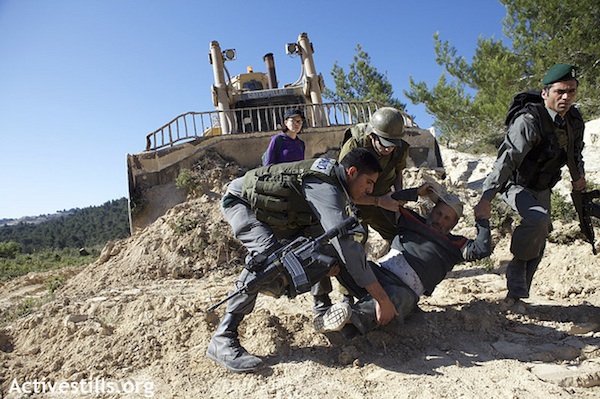 The Supreme Court turned down yesterday a petition against the construction of the separation wall between the village of Walajeh, so close to Jerusalem it can essentially be seen as an inlet, and the city itself. The opposition to the wall came from an unusual amount of quarters, including the villagers themselves (arguing the wall would block them from their fields, olive groves and the village water spring, as well as its ancient cemetery), ultra-right settlers of the Marzel variety (who wanted the wall to only separate Walajeh from Bethlehem, presumably so that the village can be colonised in a manner similar to Silwan and Sheikh Jarrah), pro-democracy settlers of the Fruman school, who are opposed to the wall politically, ideologically (in terms of partition) and aesthetically, and, finally, Israeli environmental organizations, who feared damage to the area’s landscape and historical agricultural sites. The court battle was accompanied by non-violent protests against the construction of the wall; Joseph covered one such protest late last month.

The rejection of the petition, which focused on the section of the wall between Walaje and Jerusalem, means that the village is essentially turning into an open-air prison. The army’s promise to let villagers out to their fields via “agricultural gates” is only as good as the army’s word – which is easily and routinely superseded by real and unprovable “security concerns”, deliberate or accidental administrative failures, and just about any reason under the sun.

Other villages have face similar predicaments in the past few years, but there’s another twist to the Walaje story: Approximately half of the village is part of the municipal area of Jerusalem, and half the of the villagers enjoy the status of Jerusalem residents, midway between the non-citizenship of the West Bank and full Israeli citizenship; this is also why the state wouldn’t make do with separating the village from Jerusalem, but also from the rest of the West Bank. The state’s decision and insistence to cut off the village from the city means much of these villagers’ rights will be invalidated, and, at least to my mind, tells something about how Israel would act in event that a “two” “states” solution should come to pass and Jerusalem was to be partitioned: Strive to leave as few Palestinians on the legal and geographical Israeli side. One wonders what would happen if the Walaje residents announced – if you want our village, take it – and demanded full Israeli citizenship as well.

Apart from that, it’s yet another reminder of how every victory against the Occupation in the Supreme Court is pyrrhic, at least to a degree. For kilometre of the wall moved, as in Bilin, there will be two-three left unmoved, as inWalaje; and it’s difficult to shake off the growing feeling going to the court helps it legitimise 90 percent of the occupation at the price of challenging 10 percent of it. It’s impossible not to go to court and not to use every instrument available to alleviate the suffering of people involved in each particular case, but the larger political picture shows that the answer lies elsewhere.

Joseph Dana contributed to this report