Some left-wing writers and spokespeople look to Syria and see Vietnam. They are terribly wrong. The moral and historic duty of any progressive person is to stand by the Syrian people’s struggle for freedom and help them topple the genocidal Assad regime.

By Assaf Adiv (translated from Hebrew by Ann Lavi) 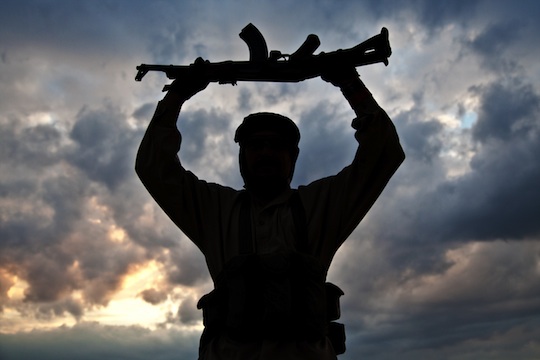 The U.S.-Russian Geneva agreement on disarming Syria of chemical weapons, signed in mid-September, has postponed the showdown with the Assad regime. As the world watches how this new collaboration between Putin and Obama works out, the real question for the Syrian people remains as before: how to end the killing. In this respect, there is still relevance to the debate that erupted on the eve of what everyone thought would be a decision by Obama to attack Assad.

The voices opposing Obama’s tough stance came from both right and left. From the right there was an article published by Professor Moshe Arens in (Haaretz September 3, 2013) claiming that when evil fights evil, it’s best to stay away: “The sad truth is that both sides in the conflict are forces of darkness.” A similar position was taken by Edward N. Luttwak, a senior associate at the Center for Strategic and International Studies and a respected author, who posted an op-ed in the New York Times suggesting that the American administration should let both sides in Syria shed their blood, making sure neither is strong enough to win.

The left-wingers who opposed “war on Syria” did not seem to notice Assad’s ongoing war that has been tearing Syria and the Syrian people apart. These leftists find themselves today, unintentionally, providing excuses and justifications for the crimes of Assad’s regime. Tariq Ali, for instance, is a prominent figure of the British Left who has persistently supported the struggle for colonial liberation since the Vietnam War. He sees Syria in terms of Vietnam. Accordingly, he does not notice the difference in time and social forces. At the end of August, just after the chemical attack, Tariq Ali explained in an interview to the American radio show, Democracy Now, why there is no solid basis to hold Assad’s regime responsible for the attack. The real cause for the planned American intervention, he said, is not the nature of the Assad regime and its crimes but the intention of America and Israel to punish Hezbollah and Iran for their anti-western position.

Israeli Knesset member Dov Khenin from Hadash (Communist Party Front) has joined his voice to the leftists who are waging the last war, instead of seeing the genocide in Syria and taking a position on it. In his Facebook page MK Khenin wrote after the massacre: “There has been a terrible civil war in Syria. More than two years ago, Syrian citizens went to demonstrations for the sake of the democratic change. Yet today those citizens find themselves trapped between the regime and Islamic extremist organizations.” This position stands in embarrassing resemblance to that of Moshe Arens mentioned earlier.

Changing the rules of the game

The rationale of left and right may be different. The outcome, though, is the same — they allow Assad to go on massacring his people This outcome could have continued for many months longer if the chemical attack in the Damascus suburbs had not changed the rules of the game.

On August 21, at the dawn of black Wednesday, social networks and information agencies began posting terrible images of children who had suffocated to death from the gas attack in Guta, a suburb of the capital Damascus. This appalling act, which killed more than 1,400 defenseless citizens, was possible only because of the passivity and forgiveness demonstrated up to now by the West towards Assad. Assisted by the Russians and Iranians, Assad activated his destructive arsenal against his own people, while the rebels who are still standing have almost no means.

Since the outbreak of civil war in Syria, America and the other western countries have allowed themselves to ignore events there and to hope that the problem would just disappear. Western public opinion, and particularly the American one, perceives Arabs, and especially Muslims, as mortal enemies — an attitude that can be dated at least to September 11, 2001. While American troops are licking their wounds from the Iraqi and Afghanistan interventions, and while the whole country is in state of financial crisis and deep political division, the mere idea of an additional intervention in a Muslim country’s war evokes resistance.

The US could have provided massive support to the opposition already two years ago. It could have provided a safe corridor for the refugees, as the opposition demanded. It could have sent sophisticated armaments to the military wing of the civil opposition, the “Free Syrian Army.” Acting in this way could have helped shorten the civil war, ending the bloodshed before it became genocide. But all this has not happened. That is why, when the deadly chemical attack occurred, it was such an embarrassment for Obama.

The use of Sarin gas against the citizens of Syria joins Assad’s methodical use of napalm, fragmentation bombs and the targeting of people in line at bakeries or crowded funerals in the rebel-dominated areas. The regime’s speakers attempt to justify this military repression by claiming that the rebel forces are largely from al-Qaida, which they warn will be the only alternative to Assad.

But this rational is baseless. Those on the left who adopt it and tend to legitimate the Syrian regime are destroying the image of the Left in the view of public opinion. To imply that the people of Syria are passive and impotent, and that therefore the rebellion against Assad must be an imperialist scheme or the work of Islamic extremists, you negate the basic tenet of the Left that the people is the creator of history.

The claims of the self-proclaimed leftist spokespersons, according to which Assad is the lesser of two evils, reveal a total blindness as to what is happening in Syria, namely, the struggle of the Syrian people against dictatorship. The conspiracy theory does not align with the facts. First of all, Syria is neither Afghanistan nor Somalia. It has a more developed economic and cultural infrastructure. It has a tradition of struggle for independence where Christians and Druze leaders played major roles. It has a solid class of intelligentsia and professionals that could be the basis for building a democratic society. The brave and sustainable mass resistance to Assad that started in March 2011 was a direct continuation of the Arab Spring and it showed that the Syrian people is waging a genuine popular struggle for democracy and social justice.

The people of Syria became sick and tired of the dictatorship of Assad’s family. They turned to nonviolent demonstrations throughout Syria, in which hundreds of thousands took part. In September 2011, the Syrian National Council was established as the major oppositional coalition, which was supposed to lead the revolution and replace the existing government. Among the partners of the National Council were those who six years earlier had initiated the Damascus Declaration, which called for the democratization of Syria and for social justice. The Council included leading left and secular parties, intellectuals, and the strong Muslim Brotherhood movement in Syria. This all inclusive coalition for democracy, which is the negation of the Jihadist extremists, appealed to the world for recognition and support to achieve its demands.

No practical support came from the West. Assad, on the other hand, enjoyed support in weaponry, funding, and military staff from Russia and Iran, while Russia and China prevented any decision in the UN Security Council. Moreover, since November 2012, the U.S. has acted to impose on the opposition its own trustees, who would dictate arrangements that would preserve Assad’s government. The intrusion into the tactics and the leadership of the opposition severely damaged the prestige and position of revolutionary organizations, while the promised assistance never arrived. Not surprisingly, the result was a strengthening of the Jihadi forces at the expense of the secular ones.

Assad was quick to grasp the Western hesitation to support the opposition. But contrary to his claims, his regime is not the answer to the growing role of the Jihadists. In fact, Assad’s genocidal barbarism is the main factor lending them a sheen of legitimacy. His regime is the main beneficiary of their existence. As the prominent Syrian revolutionary author Yasin Haj Saleh explained in an op-ed in the New York Times, “Jihadist groups emerged roughly 10 months after the revolution started. Today, these groups are a burden on the revolution and the country, but not on the regime. On the contrary, their presence has enabled the regime to preserve its local base, and served to bolster its cause among international audiences. It is misguided to presume that Assad’s downfall would mean a jihadist triumph, but unfortunately this is the basis for the West’s position. A more accurate interpretation is that if Assad survives, then jihadism is sure to thrive.”

What the Syrian people need is reliable and consistent aid in the quest for democracy, economic justice, and stability. This aim can only be achieved by ousting the Assad regime and building a viable democratic system. Whether the chemical disarmament agreement will form a prelude to such a political solution remains to be seen. Without the guarantee that the killing will stop, this agreement will have no value. As Nicholas Kristof mentioned in the New York Times on September 4: “A decade ago, I was aghast that so many liberals were backing the Iraq war. Today, I’m dismayed that so many liberals, disillusioned by Iraq, seem willing to let an average of 165 Syrians be killed daily.” It is high time for those who want to be part of progressive humanity to ditch old dogmas and support the forces of a new Syria, letting them win.

Assaf Adiv is the founder and executive nmanager of WAC-MAAN – The Workers Advice Center. This article was first published in Challenge Magazine, a publication affiliated with the Daam workers party.