Hundreds of people protested on Saturday evening in front of the Russian Embassy in Tel Aviv, as similar events were held around the world amidst calls for an international boycott of next year’s Winter Olympics in Sochi. 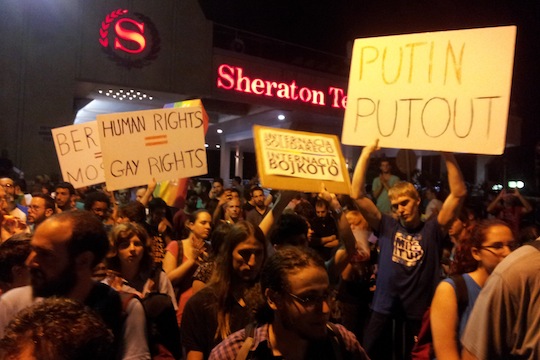 According to reports from the protests, the atmosphere was generally positive, with police accommodating an impromptu “kiss-in” that resulted in the road being blocked for roughly half an hour. Protesters chanted messages against homophobia and Russian President Vladimir Putin, and held signs in support of the international boycott campaign. 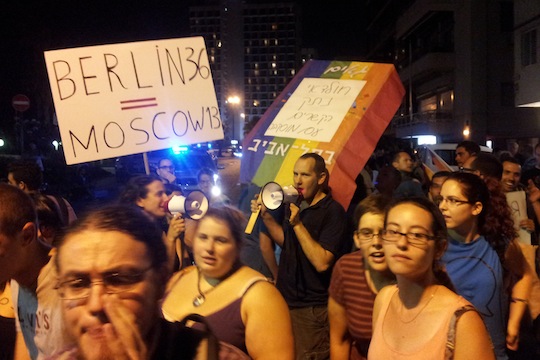 A protest against homophobia in front of the Russian Embassy in Tel Aviv. The sign in the center calls on Tel Aviv Mayor Ron Huldai to “cut ties with Moscow.” (photo: Sarit Michali)

Russia has come under growing criticism over a law recently passed banning “gay propaganda.” British Prime Minister David Cameron tweeted on Saturday that he would not boycott the Olympics, in a direct response to a widely publicized open letter from actor Stephen Fry.

Amnon Brownfield Stein, one of protest’s organizers said: “We stood in solidarity with the LGBT community in Russia and called for global action against the Russian authorities. Russia has been a discriminatory place for gays for years, but it has become harsher nowadays. Last June the parliament passed two laws, which de facto make it impossible to live an openly gay life in Russia and not get arrested. There are underground groups that abuse homosexuals and the international community cannot stay silent any longer.”

No politicians attended the demonstration, but activists affiliated with political parties were in attendance, including those from Finance Minister Yair Lapid’s Yesh Atid party and the ruling Likud party. Supporters of Nitzan Horowitz – a Tel Aviv mayoral candidate, who is openly gay – were also among the crowd.