After a shooting at the BarNoar youth center left two dead and 11 injured four years ago, the Jerusalem Open House and other LGBTQ community centers were forced to lock their previously open doors. Now that police have arrested suspects in the case, one community leader hopes the Open House’s doors can once again opened for all. 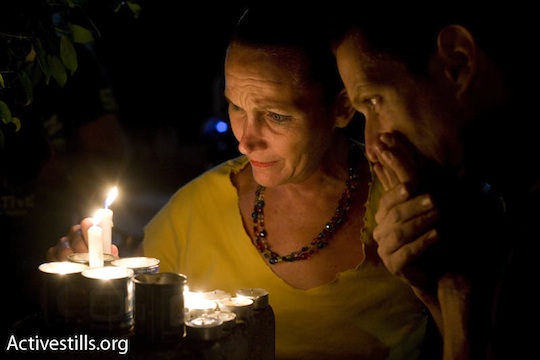 Israelis hold a candle-light vigil outside the BarNoar LGBTQ youth center in Tel Aviv after the 2009 shooting that left two dead and 11 injured, August 2, 2009 (Photo: Activestills.org)

The 2009 murders at the BarNoar youth center altered the reality of life for many LGBTQ people in Israel, but it also changed reality for civil society organizations.

Last week we were informed that police apprehended three suspects and the courts placed a gag order on the case. Despite the gag order, police  leaked information to the press at a rate that made people suggest the police should be getting their own float in the Tel Aviv pride parade, which took place two days later.

We now know that four years ago the murderer – a smalltime offender – was led to believe that one of his family members was being sexually abused by an employee of the Israeli LGBT Task Force (the Aguda) and manager of the BarNoar youth center. The suspect is accused of committing the shooting in the BarNoar that Saturday night, targeting the accused man, who was not there at the time of the incident. The case was solved after one of the accomplices, while in prison, approached police and confessed to the crime.

The murder in the BarNoar center shook the Israeli LGBTQ community in a way that can be felt even now, four years after the deed was done. On an individual level, the sense of personal safety was compromised-­‐ many people do not feel safe when they attend social events or public LGBTQ gatherings. In addition, this dramatic influence was also apparent for civil society organizations.

When I first came to the Jerusalem Open House (JOH) for Pride and Tolerance 10 years ago, the door was open, as its name suggested, and anyone could enter. Today, just a decade later, the door is shut and an intercom system locks it automatically. Entrance is permitted only after identification by a staff member and a check by a security guard. The Open House is not only closed, but also sealed behind lock and key.

This effect is not unique to the Jerusalemite organization. All around the country LGBTQ organizations were amazed to discover that their security costs jumped over night in a way that put organizations’ longevity at risk. Organizations’ budgets dramatically changed: the bulk of their budgets are no longer directed towards activities but rather to insurance. Eternal disgrace is reserved for the Phoenix insurance company, which refused to provide insurance to Israeli Gay Youth.

The arrest of Jack Titel was supposed to restore peace to the LGBTQ community. Titel mailed threats to JOH in 2005 and 2006, sending envelopes containing white powder and handing out leaflets explaining how to build your very own Molotov cocktail (the “Schlissel Special,” which he named after Yishai Schlissel, who stabbed three marchers during the 2005 Jerusalem Pride Parade). On top of all that, Titel was also charged with placing a bomb on the street of former JOH executive director Noa Sattath’s parents’ home. Despite all the charges Titel was facing, the murder at BarNoar remained unsolved until last week when a small-­time offender, who felt neglected and forgotten in jail by his felon friends, came to  police to rat them out.

In the LGBTQ community we pray and hope this tragic episode is behind us. After justice is served, the healing process will finally begin. It started four years ago when the JOH leadership decided to move the annual Jerusalem Pride Parade to August 1st, to commemorate both the attack and the inauguration of Tel Aviv’s Nir Center, calling on people to report homophobic attacks and violence.

Many years will pass before the Open House’s doors will re-­open, but I hope this week’s publication will bring us one step closer.

The Jerusalem March for Pride and Tolerance will take place on Thursday, August 1st.

Elinor Sidi is the executive director of The Jerusalem Open House for Pride and Tolerance.