Anti-corruption protests against Netanyahu are growing, and have already notched a win or two. And while the occupation couldn’t be further from the agenda, the movement could serve as a new rallying point for resistance to the authoritarian right. 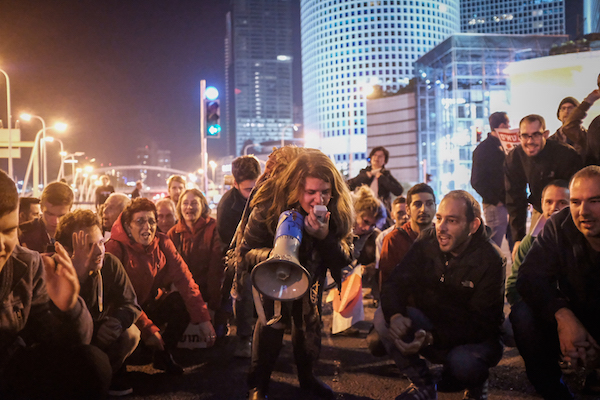 Israelis block a road during a protest against the corruption of the government in Tel Aviv on December 9, 2017. (Tomer Neuberg/Flash90)

The world’s attention may have been focused on Trump’s shift of policy on Jerusalem and the violence that broke out in its wake in recent days, but the tens of thousands of Israelis who shut down central Tel Aviv Saturday night were there to protest something entirely different.

For the second week in a row, masses of demonstrators — numbers rarely seen in the streets since the social justice protests of 2011 — marched through Tel Aviv and several other cities to protest what seems like an endless wave of corruption allegations against politicians in the country, and growing threats to democratic institutions and norms spearheaded by Prime Minister Netanyahu and his cronies.

The protests have already left their mark.

In response to the previous week’s demonstration, the size of which surprised even its organizers, Netanyahu announced that legislation meant to protect him personally from the fallout of numerous corruption investigations would be altered so that he does not benefit from it personally.

The protests may have only arrived in Tel Aviv a week ago, but this is not a new movement; the outrage at corruption in Israel is far from new. For over a year now, several hundred people have been holding weekly demonstrations near the home of Israel’s attorney general in the Tel Aviv suburb of Petah Tikva, demanding that he indict Netanyahu for the various corruption allegations for which police are investigating him.

There are two criminal investigations focused on Netanyahu himself, another centered on his wife, several concerning some of his closest allies and confidants. Criminal investigations are also underway against Netanyahu’s trusted stooge, coalition whip David Bitan, and against Finance Minister Aryeh Deri, who previously served nearly two years in prison for fraud and bribery.

The sense of corruption and criminality in politics extends far beyond the current government and its leader. Dozens of Israeli mayors are currently under criminal investigation for bribery or embezzlement (some have been charged, some found guilty). Never mind the fact that Netanyahu’s immediate predecessor, Ehud Olmert, was only recently released from prison after serving 17  months for taking bribes. Likewise, former Israeli Presdient Moshe Katzav was just released after serving five years in prison for rape.

Israelis holding signs and shout slogans during a protest against the corruption of the government in Tel Aviv on December 9, 2017. (Tomer Neuberg/Flash90)

Corruption is only half the story, however.

Just as much of a rallying cry for many is the shift toward authoritarianism engineered by Netanyahu and his successive governments’ anti-democratic legislation and rhetoric. The current government, arguably the most right-wing in Israel’s history, has shifted anti-democratic trends into high gear over the past year or so, empowered by the rise of Donald Trump and right-wing nationalist movements in Europe and elsewhere.

What started as attacks on Palestinian citizens and the Jewish left has broadened over the past years into threats against civil society, the media, academia, and the judiciary. Even the police and the army, long thought to be sacred cows in Israeli political discourse, have been attacked by some on the right as “too leftist” with increasing frequency.

In a recent speech, Israeli President Reuven Rivlin described the current trends in government as a “coup” against the pillars of democracy.

It is the combination of those two issues — corruption and the undermining of democratic institutions (albeit, “democratic” only from an exclusively Jewish perspective) — that brought tens of thousands of Israelis onto the streets two December Saturday nights in a row.

Speaking at one of the protests in Tel Aviv this month, Netanyahu’s former national security advisor Uzi Arad warned: “Historians teach us that countries are only as strong as their institutions. Today, the State of Israel is [operating] against the State of Israel… I worry that without a shift in how we deal with corruption and bringing corrupt individuals to justice – our greatest fears will come true.”

First, the vast majority of protestors on the streets have never been big Netanyahu fans to begin with, and have never voted for him. In that sense, they should not be viewed as representing a dramatic shift in political voting patterns. Netanyahu is still leading in almost all of the recent polls. However, this does indicate some sort of change. Forcing Netanyahu to back down on a bill he was extremely enthusiastic about is no laughing matter, especially when there is virtually no parliamentary opposition to speak of. The more these protests go on, the more strain it will put on the government, and especially its “weakest link” – Finance Minister Moshe Kahlon, who broke away from Netanyahu’s party and is considered by many to be the last defender of democratic values in the current government.

Second, while the world seems to view Israel only through the lens of occupation, war and conflict – for many Israelis these are not the major concerns. While the old Zionist Left has almost completely disappeared, as Labor moves even further to the right under the leadership of Avi Gabbay, the struggle against political corruption and for democratic values could serve as a new rallying point for resistance to the hard, authoritarian right.

As Amira Hass wrote in her latest Haaretz column, most Israelis profit from the occupation, and refuse to realize that “Israel is not a democracy because it rules over some 4 million Palestinians who are bereft of rights and routinely dispossessed, and about 2 million who are second-class citizens.” Nevertheless, Hass supports the protest movement: “True, the demonstrators in Rothschild and Rabin Square are not joining Ta’ayush [a left-wing group that protects Palestinians from settler violence, h.m.]. They are taking to the streets to oppose the erosion of democracy for Jews. I only hope this erosion process will be as slow as possible … because worse is not better, only worse and more dangerous.”