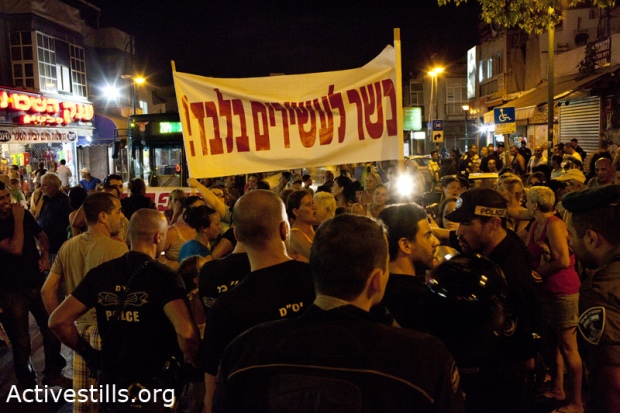 In the special press conference at his office in Jerusalem this morning, Netanyahu attempted to empathise with the protest, claiming he identified the looming housing crisis already several years ago and promised. Flanked by housing minister Ariel Atias and finance minister Yuval Steinitz, whom Netanyahu reportedly attempted to oust just a few days ago, the prime minister blamed the housing shortage on too much red tape, which he promised to slash at vigorously. After  promised to inject 50,000 new flats into the real estate market within 18 months, prompting his Twitter alter egot, @fake_bibi, to comment: “I’m so talented it will take me five minutes to solve  a problem I identified ten years ago.” Netanyahu’s plan also involved a number of discounts and advances for students, which observers interpreted as an attempt to buy the powerful National Union of Students out of the struggle. Although the chair of the union praised the “historic achievement” in Netanyahu’s promises, the union itself announced last night it will not abandon the struggle, which is wider than only student needs, saying walking out now would be both impractical and immoral.

The prime minister’s speech galvanised the demonstrators, who set out on a series of protest actions across the country. Roads were blocked in Tel Aviv and in Haifa, and two protest camps previously demolished by Tel Aviv authorities were put up again, in Levinsky Park and in the Hatikva neighbourhood. Levinsky park is the largest public space of Tel Aviv’s migrant, illegals and refugees quarter, while the Hatikva neighbourhood is the quintessential Tel Aviv working class area and a Likud stronghold for many years. The mother-camp on Rotschild Boulevard sent out solidarity delegations of several hundred to both camps, emphasising all were part of the same struggle. Meanwhile, a Jewish and Palestinian joint camp was set up in the highly sectarian city of Akko, while on the road from Tel Aviv to Jerusalem the top leadership of Israel’s national Medical Association continued their hunger strike as they marched from their headquarters to the prime minister’s office.

None of these developments bode well for Netanyahu, who woke up this morning to a stunning Haaretz poll stating 87 percent of the Israelis support the tent protests, while only 35 percent believe Netanyahu is handling the crisis in a satisfactory manner. Two months ago, the prime minister returned from his speech to Congress with 51 percent approval rating, most of which now appears to have vaporised completely. Netanyahu’s cabinet colleagues were loathe this week to defend him in public, with one Likud minister, Michael Eitan, publicly stating Netanyahu does not know where he is going, and another minister, remaining anonymous but described as a “Netanyahu ally”, saying Netanyahu was showing “panic and lack of leadership.”

Atmosphere in the main protest camp on Rothschild, which grew from 6 tents two weeks ago to nearly 400 tents this week, was euphoric, with Israelis of all creeds and communities mingling and discussing issues as diverse as the real estate market and the semantics of the word “corruption”, castigated by speakers as concentrating  on personal failings rather than on the wider systemic failures. In between the tents and the discussion circles musicians played, including some of Israel’s better-known rock musicians, two jazz bands, one Breslav hassidic klezmer group, and a string quartet, which played Haydn, un-amplified, on one of the busiest corners of the boulevard, to a receptive audience of several dozens people of all backgrounds, traditions and ages.

Organizers today announced that following the success of last week’s rally, which they claim was attended by 50,000 people (contrary to the more conservative police estimate of 30,000), they will aim to have at least 100,000 people out in the streets across the country, with the main economic protest in Tel Aviv joining forces with a preplanned mass protest against recent anti-democratc legislation, such as the boycott law.