The medical establishment in Israel has come under fierce attack for abiding by the fundamental ethic of treating the most seriously wounded first — no matter who they are and what they have done. A medic wheels away an Israeli security guard who was stabbed by two Palestinian boys at a tramway station in the settlement neighborhood of Pisgat Zeev in East Jerusalem on November 10, 2015. (Oren Ziv/Activestills)

With the current escalation in violence throughout Israel-Palestine showing no signs of abating, the issue of medical ethics has found itself at the center of public debate in Israel. The small storm erupted following a recent decision by the Israel Medical Association to implement the internationally accepted standard of medical neutrality at the scene of a terror attacks, a standard that mandates the non-discriminatory treatment of the sick and injured even in times of conflict. Under this principle, medics are tasked with saving as many lives as possible, no matter the background, identity and actions of the patient.

The public debate began with an argument that erupted recently on Israeli radio between the head of Magen David Adom, Eli Bein, and Yehuda Meshi Zahav, the chairman of ZAKA — an organization of community medical volunteers — over who should be treated first at the scene of an attack.

Bein argued for medical neutrality, saying that MDA’s rule is to “treat the most seriously wounded person who is in life-threatening danger,” no matter who is the attacker and who is the victim. Zahav retorted that if it’s a terrorist, he shouldn’t be helped at all, let alone before others.

Following the debate Hadas Ziv, the director of Public Outreach at Physicians for Human Rights in Israel, investigated the matter further and found a paper published by the Israel Medical Association in 2008, with one troubling clause that allowed for medical professionals to treat victims first under the principle of “charity begins at home.”

Ziv wrote a complaint to the the IMA on the grounds that this clause violated medical neutrality. The IMA clause had “no precedent in any other medical ethics,” Ziv told +972 Magazine.

The IMA agreed to remove the clause. The new rules of treating according to need alone came into effect at the beginning of this week.

The decision provoked a front-page splash in freesheet Israel Hayom, which focused on the fact that this code of ethics may result in whoever carried a terror attack being treated before their victims if they are more severely wounded. The paper featured a response from IDF “philosopher” Asa Kasher — who developed the fallacious concept of “enemy civilians” while authoring the IDF’s own code of ethics — saying that in exceptional circumstances, the accepted medical standards are not sufficient. 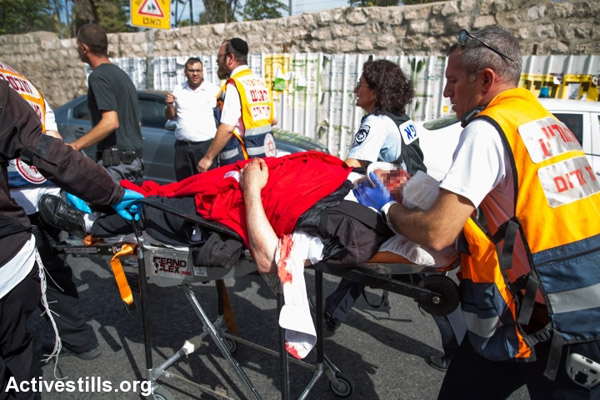 Medics evacuate an Israeli man who was wounded by a Palestinian assailant in West Jerusalem, October 13, 2015. (Yotam Ronen/Activestills.org)

Former foreign minister MK Avigdor Liberman, who is no stranger to inflammatory comments, called on the head of the Israel Medical Association to resign in the wake of his “shameful decision to treat the most wounded first, even if they are a terrorist. This is a non-humanitarian decision, taken by someone who…has lost their moral compass.” The head of the IMA, Dr. Leonid Eidelman, responded [Heb] on Wednesday that no one would resign, emphasizing that “medical considerations come above all others.”

Dr. Eidelman also clarified that medics in Israel had always acted in accordance with medical neutrality, but once they realized that the clause Ziv was referring to could contradict that ethic, they took the decision to remove it.

Rabbi Yuval Cherlow, one of the founders of a leading rabbinical organization in Israel and a member of the Ministry of Health’s ethics committee, also criticized the decision.

ZAKA, for its part, has announced that its volunteers will continue treating victims before perpetrators, regardless of severity of wounds.

At the heart of human rights

Despite what Liberman may believe, the decision of the IMA is entirely humanitarian. The duty of those in the medical profession to practice neutrality is enshrined in the Geneva Convention and lies at the heart of the work of organizations such as PHR and Doctors Without Borders, which gives priority to those in the “most serious and immediate danger.”

“A doctor is not a judge, not an executioner, nor a policeman,” Ziv stressed. “They should act according to their professional codes of ethics.”

The issue is a highly emotive one and understandably jars with many people’s personal convictions, especially given the current severity of the situation in Israel-Palestine. Yet this is a matter that transcends politics, conflicts and individual opinions. It is one of the foundational principles of medical practice, which itself reflects the most inviolable of human rights: the right to life.

This moral imperative dictates that we respect others’ right to live, even if they do not respect ours. It is a principle that for many will be sorely tested at a time of seemingly endless violence, but without which our humanity is lost to us entirely. That political and spiritual figures and the most widely-read newspaper in Israel can so readily call this into question based on where their personal feelings lie is deeply worrying. As Ziv said, if we begin asking medical professionals to adapt their practice to their own moral judgements and political persuasions, it would be the “end of medicine as we know it.”

To further imply that medics who are simply adhering to the internationally accepted ethics are somehow violating the state’s morals is a reckless precedent to be setting. That’s even more true at a time when the atmosphere in the country has crossed the line from febrile into combustible and the level of tolerance for perceived deviations from the party line is shrinking by the day.

The increasing appetite for identifying and outing “enemies of the state” is already at dangerous levels, with those liable to be branded traitors reaching ever-greater numbers. Adding medical professionals to that category for the “crime” of impartiality has potential consequences that do not bear thinking about.

Calling this ethical standard into doubt also leaves behind a raft of disturbing questions: What if the Ministry of Health reinstates the clause to practice discriminatory triage at the site of an attack or in a hospital afterwards? What if a doctor refuses this order — will they be barred from practicing medicine, or subject to criminal proceedings? Who will ultimately hold the reins of medical ethics in Israel — the medical experts themselves? Or politicians?