Breaking the Silence, an organization of Israelis who served in the IDF and work to expose human rights violations committed by Israel,  released today a collection of soldiers’ testimonies called Children and Youth, Soldiers’ Testimonies 2005-2011. The report attests to the mistreatment of Palestinian children, still taking place, years after the peak of the Second Intifada. 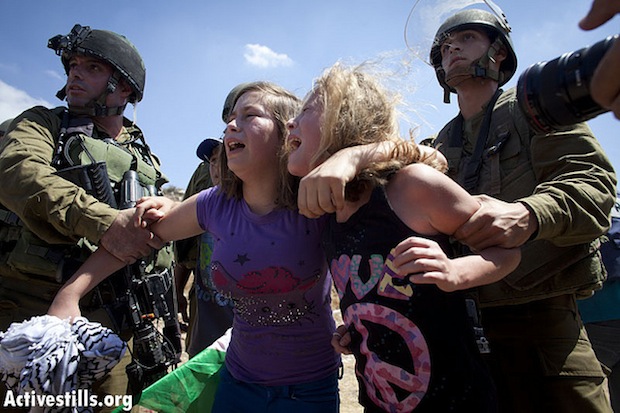 +972 bloggers often report on the maltreatment and abuse of children, but nothing speaks as strongly as firsthand accounts by young men – practically children themselves when they join the army – who are trying to come to terms with their actions. This catharsis, while it may not be able to end the occupation, is essential to the process of getting Israelis to recognize their culpability in the perennial occupation, and getting others to wake up to the reality.

The following are a selection of testimonies:

Until someone comes to pick them up
Unit: Nahal Brigade
Rank: First Sergeant
Hebron 2010

On your first arrest mission, you’re sure it’s a big deal, and it’s actually bullshit. You enter the Abu Sneina (Hebron) neighborhood and pick up three children. After that whole briefing, you’re there with your bulletproof vest and helmet and stuck with that ridiculous mission of separating women and children. It’s all taken so seriously and then what you end up with is a bunch of kids, you blindfold and shackle them and drive them to the police station at Givat Ha’avot. That’s it, it goes on for months and you eventually stop thinking there are any terrorists out there, you stop believing there’s an enemy, it’s always some children or adolescents or some doctor we took out. You never know their names, you never talk with them, they always cry, shit in their pants.

Was there a case of someone shitting in his pants?

I remember once. Always that crying. There are those annoying moments when you’re on an arrest mission, and there’s no room in the police station, so you just take the kid back with you to the army post, blindfold him, put him in a room and wait for the police to come pick him up in the morning. He sits there like a dog… We did try to be nice and find a mattress for them, some water, sometimes some food, and they’d sit there blindfolded and shackled, left like that until morning. Those were the instructions. That, or just to leave them in the war-room. That was also standard procedure. Until morning, until someone came to pick them up.

When there’s a “disturbance of the peace” the unit commander is authorized to ask the battalion commander for permission to shoot the leader in the leg.

What is a leader?

These are kids. Everyone participating is a kid. No older than 16. At most, 18. Usually when we come in, they don’t go to school. We’re the attraction and they come out to ‘play’. I even remember once we put on music for them through some cellular phone. We also got used to this. We were relatively sane, took things fairly in proportion. We’d get… cement blocks and crazy things thrown at our vehicle and you… at first you use some rubber ammo and then realize, it’s silly. Once… there’s this PA system we have (a sound system for addressing a large public), so we put on music from a cell phone and everyone started dancing.

Yes, it was huge. We put on music and suddenly they all stopped throwing stones and began to dance. It was eastern music so they were dancing with their hands. Then the song ended and they went on throwing stones. It was really serious. You realize who you’re dealing with here. These are kids. Chances are I’d do exactly as they do if I were in their shoes. There was a case of a unit commander who decided to shoot a guy in the leg because he runs the show, and it happened.

Yes. Live, not rubber. You know, from the point of view of the commander, they would have stopped throwing anyway.

When you begin getting hit with stones, you get out of the jeep?

You shoot the rubber ammo from inside the jeep?

You shoot through the loophole.

Where do you aim? Do you choose some kid at random?

Yes. Choose someone, aim at his body.

10 meters range at the center of mass?

I remember one time we put a kid down. We didn’t kill him but someone hit the kid in the chest and he fell and probably lost consciousness, or at least, it was pretty close. About 10 meters’.

Were you instructed as to how to use rubber ammo?

No. It’s like… There are rules. They tell you to shoot four. There’s this cluster of rubber bullets, pieces with four parts, packed in a kind of nylon. You can break it in two, so it’s stronger and flies further. As soon as it’s four it’s less strong and flies less far. We’d usually break it in half.

Is this something you were told to do? That if you want to achieve a longer range you break it in half?

No, we figured it out ourselves. It’s something that’s common knowledge in the army. People know about this. It’s not… When you use a weapon, you get to know it pretty well, I guess.

Just so you know, as soon as this pack is broken in half, it becomes lethal.

Really? Well, that’s what we did.

We did, too. As soon as the ‘tampons’ are separated, they’re lethal. The nylon must not be removed.

We barely fired a whole cluster, I mean four. It’s like you want to save ammo, too.

Did you swear at the soldier?
Unit: Kfir Brigade
Rank: First Sergeant
Hebron 2006-2007

When I was a commander at Gross Post [in Hebron], sometimes out of boredom, you know, there are more soldiers there so you sit and chat. I recall once some soldier caught an Arab kid and said: “You swore at me!” or something like that. His grandfather or father came, some adult, and he told them: “The kid swore at me. You don’t know who you’ve messed with, I’m a maniac,” begins to curse him, threaten him.

You’re looking on and saying to yourself, Wow, I don’t know. I mean, cases of real humiliation…

Once there was a stone-throwing incident at Gross Square, so we were alerted and the kid appeared and we were called from HQ, and the lookout instructed us: “Listen, stop where you are, he’s right next to you.”

How old was he?

15 years old. His name was Daoud. We stopped our vehicle, ran out, he was in total shock. We took him to Gross Post, to the Jewish side, and he began to cry, scream, he was just streaming sweat and tears. We had nothing to do with him, suddenly you end up with a crying kid. A second ago he was throwing roof tiles at the army post, and you’re dying to beat him to a pulp, and you’re alerted out there in that heat. You want to kill him but he’s crying. We didn’t know what to do, so we put him under watch. Once someone who was with him went wild, did something to him and left.

At some point when I was with him I tried to calm him down because he was tied, blindfolded, and crying, tears and sweat streaming out all over. I began to shake him, then the deputy company commander tried. He grabbed him and began to shake him: “Shut up, shut up, enough, cut it out!” Then we took him to the police station at Givat Ha’avot and he continued to cry because the policemen didn’t take him in for interrogation. He was so annoying, this was insane. In all that mess, while he was crawling on the floor, the communications man took out his Motorola, his two-way radio and boom! – banged him on the head. Not meaning to be cruel, just hearing that unbearable crying for over two hours.

This happened at the police station?