New light is shed on the shooting death of non-violent demonstrator Bassem Abu Rahme in Bil’in in 2009: A soldier who served in the same brigade as the shooter testifies how the incident was perceived by other soldiers. The testimony strengthens the claim that the shot was fired against army regulations.

“The guy who shot him… was kind of pleased with the whole thing, he had an X on his launcher.”

On April 17, 2009 Bassem Abu Rahme was killed by an extended-range tear-gas canister that hit him directly in the chest. Abu Rahme, one of the most prominent figures in the popular struggle against the wall in Bil’in, was demonstrating non-violently and shouting at the commanding officer across the fence to stop firing tear gas, as a foreign national had just been hit in the ear by a gas canister. Another projectile was fired, hitting and killing him almost immediately. The entire incident was caught on tape by artist and photographer David Reeb (the deadly shot is fired at around 3:10).

Military orders are quite clear in regards to the shooting of tear gas canisters, stating that they should always be fired at an arched angle, never point-blank (in a direct trajectory), which makes the canisters much more lethal. Even so, as B’Tselem has warned several times and has documented, it is a common practice amongst soldiers to shoot projectiles directly at demonstrators, causing serious injury and at times even death – as in the cases of Abu Rahme and Mustafa Tamimi (in Nabi Saleh) after him.

As is often the case, the army refused to open an investigation into the case of Abu Rahme, claiming the shot was fired in accordance with procedures, and that the canister changed its arched course after hitting a wire. Only after the Abu Rahme family and attorney Michael Sfard petitioned the High Court, with video evidence and a forensic expert opinion supporting the claim that the shot was fired directly, did the army launch an investigation, which has been going on for more than two years now.

Officers told soldiers the shot was fired against regulations

Now, three and a half years after the shooting, a new testimony given to “Breaking the Silence” exposes how the story looked from the uniformed side of the fence. A soldier who served in the same brigade as Abu Rahme’s shooter told the NGO’s researchers that officers informed the troops that the shot was illegal, that soldiers would watch Reeb’s video of the incident and laugh about it, and that the shooter marked a victorious X on his rifle, signifying a successful kill. The testifying soldier was a sergeant in the 7th Armored Brigade at the time.

Some soldiers had a grenade launcher installed on their guns, so they also had the option of shooting tear gas canisters. In the second company, which was stationed in Ni’lin at the time, there was one person… you know the man who got killed in Bil’in? So this is how he got killed, from one of the soldiers’ launcher. The actual order is to not shoot the gas canisters point-blank, but rather to aim in an arch at where the demonstrators are standing. The grenade flies into their midst and releases the gas and that should disperse them. But this one time, one of the soldiers simply aimed at someone point-blank, and it hit his chest and he got killed.

How did you hear about this?

Everybody heard about it. It was a mess. Once something happened in the [military] sector everybody would hear.

How did everyone know that it was point-blank?

Because they would tell us.

Your commanders talked about it?

They didn’t linger on it for too long, you know. Just explained what happened. The use of grenade launchers is not really that common (amongst army units, H.M). Dispersing demonstrations is mostly handled by the Border Police.

Who “explained what happened”?

The platoon commander or something. Usually in briefings they’d tell what had happened recently and explain. At the time there was a video of this incident where you see the man who got shot, you see something hit him, then he roles over and shouts and then he actually dies. Some of the soldiers had this clip on their phones and they’d send it to one another and have a bit of a laugh. The guy who shot him, I don’t remember his name, I personally don’t know him but I had an idea of who it was. He was kind of pleased with the whole thing, he had an X on his launcher.

(The full testimony was published in Hebrew on Breaking the Silence’s site. This is my own translation) 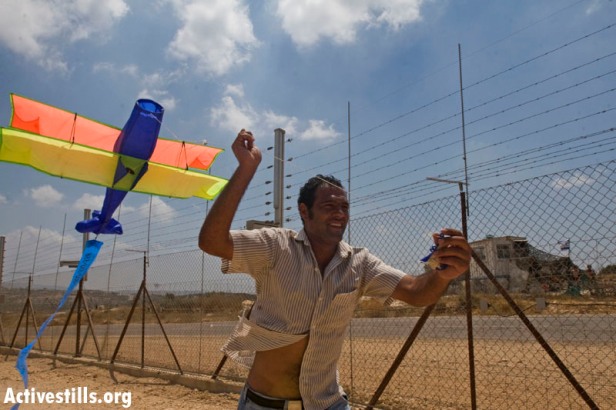 Bassem Abu Rahme, killed by a tear gas canister in Bil’in in 2009

Following the publication of this testimony, B’Tselem spokesperson Sarit Michaeli wrote on her Facebook page that she herself once documented a soldier aiming a grenade launcher directly at a Palestinian youth, threatening to “give him the Abu Rahme,” in the soldier’s own words. As mentioned above, the investigation of the shooting of Abu Rahme is still ongoing.