When Israel backs an American regime that threatens our liberty as humans and our safety as Jews, the claim that Zionism protects Jews no longer holds. 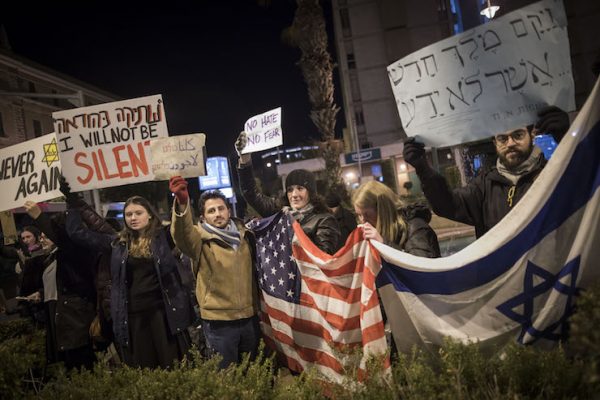 For most American Jews, Donald Trump‘s regime has ushered in the most profound and destabilizing existential crisis since the Holocaust. We watch in horror as President Trump launches a full-frontal assault on the institutions, and the very principles, of the liberal democracy upon which we have built our lives for generations. We stand aghast as his administration tramples the civil liberties of our Muslim, immigrant and refugee neighbors, and we brace ourselves as a potent anti-Semitism simmers at the edges of the alt-right movement that helped propel him to power.

American Jewish establishment and legacy institutions, which already possessed little relevance for many of us, seem ill-equipped to guide us through this new reality. And the State of Israel, far from standing with us against this fascist menace, appears to be egging it on. As we all weather the short-term shocks Trump inflicts upon the political and civic institutions of American life, the full reverberations of this longer-term shock have yet to be felt by American Jewry. In the future, the era of Trump will be remembered as the end of the Zionist dream.

The internal crisis the mainstream Jewish American community faces is far more profound than we are willing to admit. For almost a century, the tradition of democratic liberalism in America has provided the bulk of white Jews in the U.S. with safety, prosperity, and a stable modern identity. Across the country, we have built a vibrant network of communal institutions, and poured our energies into strengthening the fabric of American civic, cultural and political life. After the Holocaust, the democratic values of religious and political freedom and civic equality were central to our orientation in a changing world. Today, though a growing portion of our community has moved to the right on political and social issues, a sizable and disproportionate majority of American Jews retains liberal and progressive values.

Now, seemingly overnight, Trump’s attacks on the press, judicial institutions, human rights groups and other organs of democracy threaten to erode the foundations of the world that has been comfortable for many of us. And our well-established, amply-resourced communal and legacy institutions, like the Jewish Federations, have barely raised a tepid voice of protest against this onslaught. They were unable to anticipate, comprehend, or combat the startling surge of far-right populism and neo-fascism in this country, and the unprecedented resurgence of anti-Semitism brewing in its wake. Though they appear calm, our leaders, like most others in the country’s establishment political and civic landscape, tremble behind their doors. 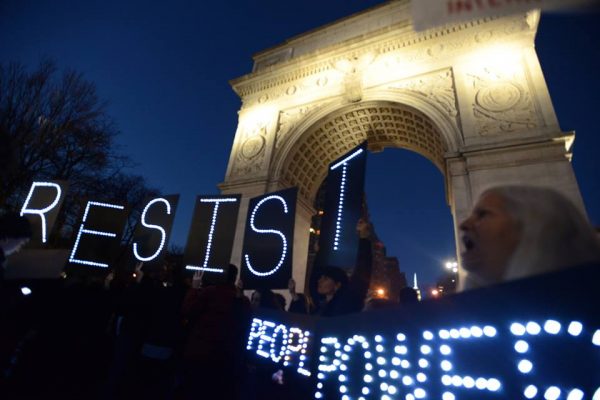 And where is Israel to protect the Jews of America? Trump’s words and actions on International Holocaust Remembrance Day were a double affront to American Jewry. Not only did his administration’s statement fail to name the Jewish identity of the Holocaust’s primary victims, or the ideology of anti-Semitism that fueled their annihilation — on the very same day, he signed into law a Muslim ban chillingly reminiscent of America’s rejection of Jewish refugees that, in the 1930s, helped seal the fate of so many European Jews. Prime Minister Benjamin Netanyahu did not only fail to speak out against any of this, but the next day, he praised Trump’s decision to build a border wall with a bombastic tweet meant to emulate the swagger of Trump himself.

Wrestling with an impossible contradiction

After the Holocaust, Israel came to be seen by many Jews the world over as an insurance policy, sworn to defend us forevermore against the reappearance of fascism on the world stage. But 70 years later, the world is divided anew into ultra-nationalist statesmen and stateless refugees, into powerful tyrants and defiant rebels. While a few American Jews back Trump, most of us strive to stand against this tyrant of our time. But what the U.S. Jewish community still has to confront is the reality that the government of Israel, along with a majority of its Jewish citizens, actively supports the Trump administration, which seems poised to legitimize Israel’s fever dreams of settlement expansion and annexation and to crush any remaining hope of Palestinian statehood.

It is true that thousands of the most committed religious settlers in the West Bank, as well as some far-right Zionist leaders like Meir Kahane, once called America home. However, most American Jewish Zionists — since the days of liberal leaders like Louis Brandeis and Stephen Wise — would place their Zionism squarely in the same tradition of American liberalism that has structured the rest of their lives. For years, these progressive Zionists have watched nervously as anti-democratic, illiberal forces have consumed the center of Israeli politics.

Regardless of whether this idea of a progressive Zionism actually reflects the reality unfolding in Israel/Palestine — I would argue that it never has — the point is that in order to remain morally consistent, American Jews must see their Israel as not only a Jewish state, but a democratic state as well. In the mainstream American Jewish imaginary, Zionism is akin to the civil rights movement of the Jewish people. It must offer the world, in the shape of Jewish liberation, a testament to the promise of universal human emancipation as well. 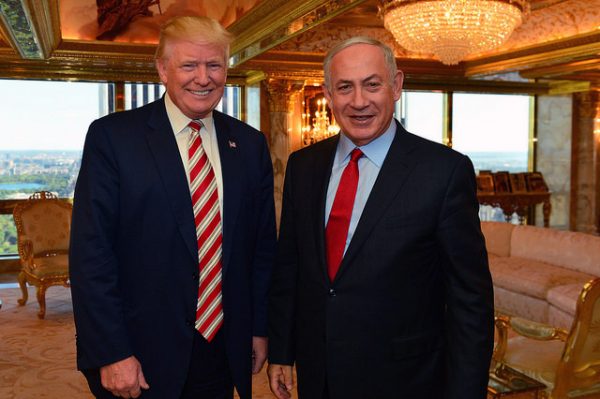 That’s why, as democratic norms have steadily eroded in Israel, American Jews have inwardly wrestled with an impossible contradiction. Over the years, more of us have chosen to speak out against Israel’s brutal occupation in the West Bank, its relentless bombardment of Palestinians in Gaza, its discriminatory two-tiered legal structure within its borders, and its denial of refugee rights. But the bulk of us have remained silent, because we were taught to trust that somehow, Israel’s troubling actions were necessary to protect the safety of Jews around the world.

But when Israel backs a regime, here in America, that threatens our liberty as humans and our safety as Jews, the claim that Zionism protects Jews no longer holds. An Israel that cheers on Goliath, as it raises its hand against the Davids of our world, is an Israel that has become startlingly unrecognizable to us. While mainstream American Jewry could choose to ignore the spread of ultra-nationalism and xenophobia in the far-off ‘Jewish homeland,’ when those same forces wash now upon our own shores, the familial resemblance and active collaboration between Trump and Netanyahu becomes impossible to ignore.

We enter the new fascist era with communal institutions that are unable to speak truth to power, and with a Jewish state that stands among the forces arrayed against us, one whose attacks on political dissent and denial of basic rights to Palestinians serve as a disturbing roadmap to where the U.S. may be headed. Though the bulk of liberal American Jewry has until now remained silent, in the era of Trump, there grows in their gut a dizzying disorientation.

By the time the Trump nightmare finally crashes into flames — as all such nightmares eventually do — and these liberal American Jews get up, rub their eyes and look around, their gaze will turn in despondence towards Jerusalem. Where once stood their progressive Israel — their ‘light unto the nations,’ symbol of the holy values of democracy and human freedom, spiritual rock of resistance against all tyranny and oppression — they will now face a state that, from their vantage point, looks no different than the monster they just helped chase out of their American homeland. The realization that, two generations after the Holocaust, the State of Israel allied itself with the forces of global fascism will be too much for liberal Zionism to bear.

As more and more American Jews face this reality, their sense of betrayal will be immense. As a community, our process of collective mourning and teshuvah (repentance) will be difficult. Our identity as American Jews, supported so long by the foundation-stone of liberal Zionism, will be in crisis. It will take some of our elders a while to admit it, and some never will, but in our hearts we will know that a state which cheered on the tyrant who raised his hand against us can no longer be our Jewish state. With the Zionist dream dead, what Jewish vision will guide us into the future? How will we rebuild?

Over the next few years, the twin barbarisms of the Trump and Netanyahu regimes will continue to dovetail, and the rift between Israel and the bulk of American Jewry will continue to widen. While a few American Jews will cast their lot with Trump, Netanyahu and the rising global forces of fascism, hundreds of thousands more will overcome the inertia of our mainstream institutions and take to the streets to defend our lives and communities against tyranny. Through this experience of struggle, American Jews will reconnect to the social movements from which, for too long, too many of us have been estranged. We will re-learn the muscles of tzedek (justice) and tikkun olam (healing the world) which, for too long, too many of us had failed to put to use.

The old dream of a liberal Zionism will not survive to carry us through the 21st century. But out of the fire of our reborn commitment to our principles, a new diaspora Jewish identity can be formed, founded on prophetic values of social justice, solidarity and love. We will again bear witness to “mi-melech malche ha-melachim,” to a “king who rules over kings,” a force of divine righteousness greater than earthly power. Let us cleave to this vision, and this work, without fear, with a clear head and a strong moral compass. It is our only hope.

Ben Lorber works as a Campus Coordinator with Jewish Voice for Peace. The views expressed here are his own.