A group of activists attempts to show Israelis and American tourists the occupation that’s taking place just a few blocks away, by simulating an American occupation of West Jerusalem.

What do you do when rammed by a man in an electric wheelchair who’s fundraising for needy Holocaust survivors?

It is hot. I am confused. My shins pre-hurt. My stomach feels twisted and odd. Over the last three years of activism and direct actions I’ve been yelled at, shoved, spit on, detained, whacked with a baton, cursed out, dragged, arrested and nearly urinated on, but this was by far the most upsetting and unexpected counter-protest I’ve ever experienced.

I was standing on a kitchen chair when it happened.

All That’s Left: Creative direct action. Street theater. In the middle of a sea of people in Jerusalem’s Machaneh Yehudah market at 2:40 p.m. on a Friday afternoon.

We are here, I say in loud American English, stepping up onto a chair.

To announce that from this day forward, I yell, my assumed voice of authority growing louder and shriller.

(To announce that from this day forward), respond the others. Four of them are holding two large American flags in a V-formation; others are waiting nearby with fliers and cameras. 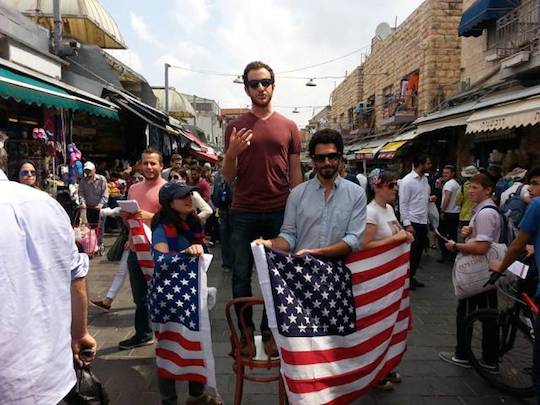 The beginning. (Photo: A. Daniel Roth)

This piece of land belongs, I am only half looking at my surroundings. The other half of my looking is directed, somehow, at the space between my eyes and the world, a space that I’ve come to know as my “zone,” first experienced in theater as a young kid, and later during spoken word performances as an older kid. It is a place of extreme focus and echoic silence. I’m in this. I am vaguely aware that there are people yelling and that a crowd is growing, but I don’t or can’t or won’t pay much attention: I have words to say.

(This piece of land belongs!)

To Americans only. Movement in the crowd, a flash of yellow, murmurs, raised voices. The fliers have begun distributing. I later find out that All That’s Left member Daniel Roth encountered someone who told him to hand over all of his fliers, and when Daniel refused, the man took a half-hearted swing at him.

If Israelis want to be here,

the sound of a wheels and a small motor

a sharp cry of “Go away!” in English.

(If Israelis want to be here!)

They are welcome to apply for a per-CRASH.

At first I am only vaguely aware of what’s happening, still in the zone, fuzzy, focused, removed, and then I feel myself losing balance, the chair jerking violently under me, as if alive. Then I almost fall. Lucidity and fear pull me out of the zone, back to alert. Even alert, it still takes me a few seconds to process. I am being rammed by a man in an electric wheel chair. I jump off the chair and land on my feet. Unsure what else to do, I try to continue.

Does this seem unfair?

The group is trying, also. They are confused, too. The “response” is fainter and scattered. Everyone is thrown off.

He rams directly into me, and the yellow, handwritten sign attached to the back of his wheelchair is directly in my line of vision: “Please Help. I am Collecting for 10 Needy Holocaust Survivors.”

Please stop, I say to him, breaking character, and changing my voice from bombastic to as gentle as I can muster on a confused dime.

Taken aback by being addressed directly and softly, he stops ramming me for a moment. What are you doing here? He asks.

We’re raising awareness about the occupation, and unfair Israeli policy of takeover of Palestinian properties in places like East Jerusalem and Hebron.

I hope he had simply misunderstood us, that our protest wasn’t seen as a protest, but rather some strange, genuine attempted-takeover.

They have 22 countries! He yells, his eyes wide and his voice raised. This is our only country! Go away!

And he begins to come at me again with his wheelchair.

In one moment, I am simultaneously filled with a wash of hurt-shame-anger-guilt-confusion directed at him, at myself, at this situation, at his talking points, at our talking points – and with a few clearer thoughts: this is not good. This is not what we were aiming for. We didn’t mean to make him this angry – or anyone, but yes, especially him, a man in a wheelchair with a sign raising money for 10 Holocaust survivors. On a personal level and on the “public” level of our public action level, this feels disastrous.

We begin to walk. He follows us.

At the far end of the market, we regroup.

Read a response from the man in electric wheelchair here.

It takes us a few minutes, but we shake it off and agree to try the sketch again. Elsewhere. We walk for a bit, back through the market, hoping not to see this man again. We don’t. What we do see, though, gathered at the far end of the market, is a group of about 40 backwards baseball hats and orange lanyards on display for all to see: Birthright.

OK. There’s our audience. Let’s do this. 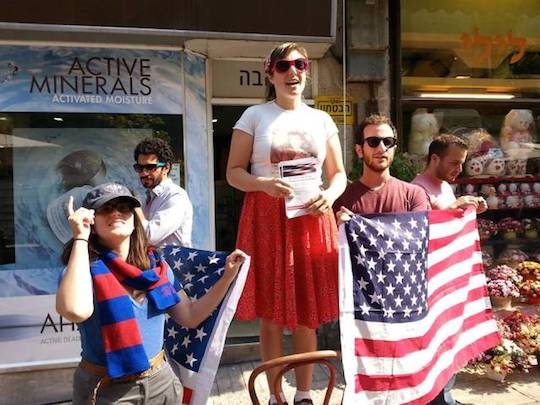 Outside the Ahava Store on Ben Yehuda (Photo: A. Daniel Roth)

We set up near the group, and another All That’s Left member takes a turn on the chair. She makes a similar speech, and the Birthright group pays attention almost immediately. They look confused, and rapt, and maybe angry? We sing a screeching rendition of the Star Spangled Banner. The fliers begin moving and the group begins to catch on. A woman who has come to film the action is yelled at and shoved. Some members of the group begin to jeer and curse.

Fuck you all, go home!

The Israeli guide is livid. The veins are bulging in his neck as he tries to drown us out by singing another American tune. Improvising, pulses high, we join him. Later, someone reported that he had yelled to the Birthright group: This one’s for the IDF! Ha! I got them to sing for the IDF! Not everyone’s aggressive, though. Others are more curious or confused. What is this? What’s going on? We hand out more fliers.

You all have no idea what goes on here, one of the Israeli guides says in a heavy accent.

Another activist — the amazing Emily Schaeffer — and I break character, pulled into responding. Switching to Hebrew, we get into our points: we are highlighting the situation taking place just a kilometer from here on Salah a-Din where exactly the same thing is happening in the post office. Ateret Cohanim, Irving Moskowitz. have you heard of this? Have you heard of them? Google before you tell us that we don’t know what we’re-

The group is herded onto the bus. Some of them rip up the fliers, others give us the finger, a few of them (males) tell us to “suck their balls,” and still others are quiet. The flier distributed during the action

On Ben Yehuda Street we quickly located another Birthright group. This time, we were more confident as we set up, and we agreed that we would not break character, no matter what. We agreed that most people who “engaged” us were simply looking for a loophole, a way out: “Are you all Jews?” Well, no… “Are you Leftists?” Well, yeah… “Did you serve in the army?” Well, some of… Not all… That’s not… “Why didn’t you protest the evacuation of Gush Katif?” Well… wait, what? And then, like that, they’ve found their way out, they can rip up the flier, laugh it off – just another one of those assholes.

A third activist took the chair this time, and as he finished his speech, he concluded with the well-known singsong trope:

Most of the group seemed to get the reference to the popular movie, and laughed. It loosened them up, and there were more fliers taken, less raising of certain fingers. We overheard one Birthrighter turn to her colleague and say, “I think they’re protesting the occupation,” to which he responded, “What’s that?”

Incredible, one of the activists in our group said as we walked away.

Moriel Rothman is an American-Israeli writer, poet and activist. Read the original, longer version of this post on his blog, “The Leftern Wall.”