The Palestinian, in whose head is engraved an image of the lands that were torn away from him, now faces an entirely different picture that clashes with the narrative and imagery of his grandparents’ stories. Haifa of today is not the Haifa of Al-Shrak Cafe or the 1920s and 30s capital of Palestinian culture. An entry permit is a statement in and of itself: Here, you are permitted to enter once again, to have a good time, to pray. That is, as long as you behave yourself. Border police officer stands in front of Palestinian as they wait to cross from Qalandiya checkpoint outside Ramallah, West Bank, into Jerusalem on the third Friday of Ramadan, July 26, 2013. (Photo: Activestills.org)

One of the questions that came up during Ramadan last year, and it’s probably relevant again this year, is why the Israeli security establishment decided to allow hundreds of thousands of Palestinians into Israel? On the Palestinian side, you hear the claim that Israel is trying to get its hands on the money Palestinians save all year for shopping during Ramadan and Eid al-Fitr. According to that logic, the decision was made only considering economic factors. On the other side, the Israeli government claims there are no economic factors, and that its motivations are purely “humane.” In other words, it is simply easing restrictions for Ramadan. According to that approach, there’s no shortage of money in Israel and the state doesn’t need Palestinians’ money; its intentions are pure and reflective of “Israeli compassion.” In other words, easing restrictions is aimed at improving relations. A taste of sorts, of the further easing of restrictions Palestinians might see when they stop their resistance against Israel and end the “cycle of violence.”

There’s some truth to both claims. It’s only reasonable to assume that Israel, as a country that invests vast amounts of money in security, wouldn’t endanger itself by allowing hundreds of thousands of Palestinians to enter just for a one-time economic boost of a few million shekels. Actually, because the Palestinian economy isn’t independent, but rather dependent on the Israeli economy, the Israeli economy would benefit from Ramadan shopping anyway, whether Palestinians buy in the West Bank or inside the Green Line. At the same time, that doesn’t mean that the decision is a product of “Israeli compassion” whatsoever, because there’s no “compassion” in politics. Politics is composed of interests and power relations, in which the perception of “compassion” plays a role in exercising political power.

Either way, the most likely scenario is that the security establishment is using entry permits as part of an important and aggressive war, a war whose battle field takes place inside Palestinians’ minds. Humans, including Palestinians, are visual beings who understand things through images and symbols. They use language (which is also a set of symbols) to produce images and then reconstruct them. Throughout their lives, Palestinians living in the West Bank, in Ramallah, Nablus, Hebron and everywhere else, have created a certain picture of “historical Palestine,” composed in the image of a paradise lost. They’ve lived in that image, and when the name Palestine enters their consciousness, that image comes tied to a package of ideas, symbols and places like Haifa, Akka, Jaffa and Nasira (Nazareth). They have a colorful picture, composed of memories from their grandfathers and grandmothers who experienced the Nakba, the day-to-day life, the Intifada, the schools, the music and the poetry.

As part of my work running creative writing workshops, I’ve met with a lot of children (who’ve since grown up) in a number of places in the West Bank. Most of them experienced the second Intifada as children. I would ask them: What does Palestine mean to you? The answers kept repeating themselves: “Cinema, journalism, public transportation, parties and celebrations, the beach, horses, a house with a garden, old houses, beautiful villages with breathtaking views, amazing silence and the call of a rooster…”

The Israeli side creates confusion among Palestinians, because it forces upon them an unfamiliar picture of Palestine. The Israeli version of Haifa, for example, is not the Haifa of al-Shraq Cafe and it’s not the capital of Palestinian culture from the 1920s and ‘30s of “al-Karmil” newspaper. Israel is telling the Palestinians, the Haifa that you remember exists only in your minds. Come experience the new Haifa, styled with Israeli magnificence, Haifa of the amazing Carmelit subway and tunnels, Haifa in which the Carmel is full of tourists, Haifa of popular beaches, of the university and the Carmel Mountains.

The Palestinian with the image engraved in his mind of lands that were stolen from him, a picture crafted from the stories of his grandparents, and who fought for that picture his whole life, now faces a reality that subverts the picture in his imagination. A picture that raises doubt, that distorts and sometimes replaces the old one. More so, an entry permit is a statement in and of itself: you are permitted to enter once again, to travel around and to pray. You’re allowed to do it all. You specifically, and not others, not your friends, not your brother, only you have the privilege. That is, as long as you behave yourself properly. It’s an expression that destroys the old picture and replaces it with an entirely different one, together with an entirely different question: How can I satiate Israel? 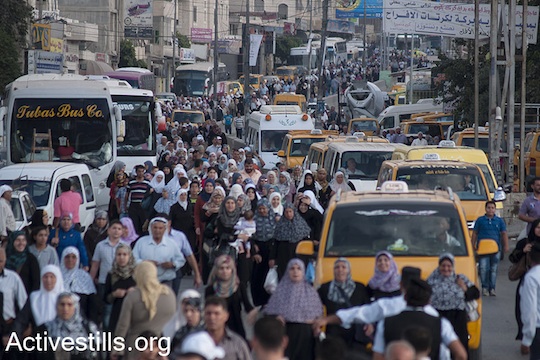 Shopping on Jerusalem’s Jaffa Street or in the Mamilla Mall won’t inject that much money to the country, but it will implant a lot of images into the Palestinian mind. When exposed to “modernization,” he’s likely to want to be just like the saleswoman with the white dress, or like the salesman with the black pants and polished shoes. He’ll want to be just like the guy who picks out a dress for his girlfriend or like the girl drinking coffee in Aroma. And then, just maybe he’ll say: Wasn’t it a shame, all those years wasted? Wouldn’t it be nice to take out a girl out instead of going out with a flag? How much nicer would it be to go to a party instead of a protest.

It seems we’re facing the last stage of that war. Now that hardly any land is left for Palestinians, now that the security establishment has thwarted most forms of resistance along the seam lines, the time has come for the battle for Palestinian minds. And it seems Israel will win, considering it controls the discourse. Israel is the dominant power that can saturate the entire debate surrounding it. It is willing to create opposition in order to show the world the Israeli version of democracy’s perseverance and longevity, and its readiness to tolerate dissent. That’s how Israel deals with oppositional discourse. It frames the opposition as part of its internal discourse; more and more, the Palestinian discourse is becoming part of the Israeli one — at best, a marginal conversation inside the Israeli discourse.

That framework is also reflected in my writing. As a Palestinian and an Arab who was shaped by that power relation, if I want to turn to the Israeli reader I must speak and write in Hebrew. In order to speak, to express myself, to resist and to say to the Israeli reader that Israel’s easing of restrictions during Ramadan is not “compassionate” and that the state is not doing the Palestinians any favors, I have to accept the rules of the Israeli discourse and become a part of it. Just as I have to accept and use Israel’s rules of writing, its figures of speech, expressions and ideas, a Palestinian from the West Bank who requests an entry permit must accept Israel’s rules: stop resisting, recognize the state, become “modern” and act a certain way. The rest is just agreeing to some of Israel’s positions vis-a-vis the Palestinians themselves.

Fady Asleh is a comparative literature Master’s student at the Hebrew University.