In a new series of adventures, travel writer Yuval Ben-Ami sets out to deconstruct the Holy Land’s most famous and heavily trodden tourist attractions. To begin, he deconstructs the entire country. 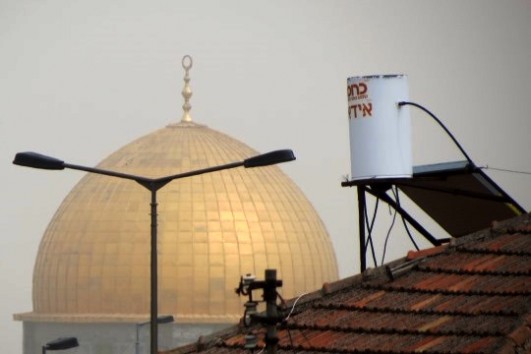 The Holy Land has no history. I mean it. It is a land without any history at all, insofar as “history” can be said to describe what is past. The wheels of history keep turning, of course, but the past, you will agree, is what most people mean by the word, especially when they travel. Rarely will someone roll into a town and say: “I’m here for the history. Where is your newest high-tech industrial park?”

In the conventions of tourism, history is what is over, and here nothing is over. Wars fought five millennia ago are still being fought. Old beliefs die hard. It is also a land without archeology. Where there is a ruin, people weep over it; where an ancient monument stands, it stands shrouded in controversy.

True, we have managed to encircle a few sites with fences and we demand entry fees, creating the semblance of touristic normalcy. But more often than not, even those sites are still in the midst of their own stories. Ethnicities claim them, scholars debate them and clerics denounce their status as attractions. Ideologists demand more excavations. Families are evicted, bulldozers trample walls, stones are thrown, blood flows.

Tourists have little choice but to ignore much of this. A short visit to the country hardly permits dealing with its countless political complexities, scholarly debates and philosophical paradoxes. Almost everything that lies outside the anticipated experience must be overlooked — is overlooked.

This project is meant to cut a small window into that reality. Over the next few weeks, I intend to visit a number of the country’s most famous and heavily trodden tourist sites, and jollily deconstruct them. I will attempt to observe them with an open mind and offer fresh perspectives: an atypical political point of view, a new aesthetic notion. One take may be religious, a second social, a third historical. I’ll even look for new ways to view the geography itself — anything that isn’t part of the typical tour guide gab.

Of course, those gabs vary. Several tourist trails intertwine here, from the Russian or Italian or Nigerian pilgrim trail to that of the Hassidic family to that of the young human rights enthusiast. Some tourists explore only the biblical. Others see nothing but the occupation. Some tourists see a land that is entirely Jewish, others an Arab land colonized by Jews. Very few foreign tourists focus on nature and the environment, but some do. Others are here for family, others still, for the beach.

Filling in the voids of one trail with input from another is deconstruction galore, as contradictions naturally arise. For several years now I have been involved in dual narrative tours, a concept crafted largely by tourism entrepreneur, National Geographic Explorer and +972 blogger Aziz Abu Sarah. On these tours, which feature both Israeli and Palestinian guides and shift between the Kibbutz and the refugee camp, I have learned just how constructive such deconstruction can be.

There’s no point in ruining a good story, unless you ruin it with an even better story. In the end, both stories are one’s own to contemplate. Emerging from this country confused makes so much more sense than believing that we’ve figured it out. It is a land full of stories, contradicting stories, and we would be fools to suffice with preconceived notions — to miss out on its mind boggling complexity.

Great thinkers such as Barthes and Baudriard have produced works of philosophical travel writing. I never studied contemporary thought and my knowledge of such works is sporadic at best. I am not even sure whether my use of the word “deconstruct” is legitimate, so don’t expect a scholarly analysis rich with references. These here are the local layman’s reflections.

Finally, I may appear aloof at times, and indeed, I may already have. In truth, I am humbled by tourists and their fresh point of view. Mine is as old and worn as the reception desk of a fading three-star hotel. I may be cynical about tourism itself at times. The concept of selling the world as a consumer product does baffle me, but I also believe in tourism deeply.

I believe that sharing with the world the beauty and power of this land is the true key to solving its many problems. We all have everything to gain from making Israel and Palestine attractive to visitors, and nothing would make it more attractive than peace and justice. Ultimately, this land without any history has one great resource from which to draw: history. Its various sites are unmatched, which is exactly why they deserve that we explore them openly.

Read part 2 of The Beaten Path, ‘The Western Wall as military parade grounds’