From afar, the flight of the fancy complex and the boxy city appear rather harmonious. It is upon close inspection that they are revealed to be made up of entirely contradicting notions. The second stop on Yuval Ben-Ami’s journey to deconstruct Israel’s well-worn tourist trail is something of an exception, in every sense of the word. Welcome to Haifa’s Baha’i Gardens. 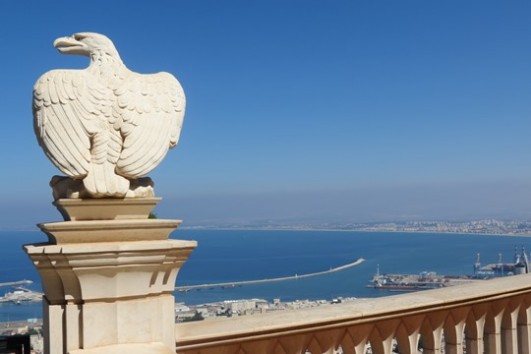 A few weeks ago, my dear friend Osnat had an interesting experience on the slopes of Mt. Carmel. It happened when she came to visit the famed Baha’i Gardens: an astounding pillar of greenery rising up from Haifa’s port district, crowned by the golden-domed Mausoleum.

The group climbed down the higher tiers of the garden, descending toward the Tomb of the Bab – the Baha’i faith’s major prophet. There are 18 tiers in all. They reflect the pillars of faith as described by the Bab, and also provide a fairly nice framework for a guided tour. A basic introduction is given at the top, with a splendid view of the bay. A few steps down, features of the garden can be pointed out, and one or two tiers later it’s time for a Q&A session.

Osnat asks: “So say I would like to become Baha’i, how would I go about it?”

This was a real conversation killer. The tour was in Hebrew, and Jews are deeply sensitive about proselytizing, while the Israeli state frowns on it severely. Consequently, all religions besides Judaism practice extreme care not to offer a pathway to the light. Osnat says she heard the group fall uneasily silent. Some may have suspected that she was “planted” to bring up the question. The guide had to quickly make clear that this is not the case. “The Baha’is do not accept Israeli converts,” she said, “so as to not meddle with the already complex fabric of this country.”

Fair enough. To the best of my knowledge, Osnat has no real inclination for becoming Baha’i (she beautifully described her very real journey of identity as a second generation Russian-Israeli here). She is, however, an authentically curious person. And so a few tiers down, on the central platform of the garden surrounding the tomb, she came up with an even more risqué question:

“There are all sort of stories about things that are inside the mountain,” she said, “Some people say they keep rocket launchers there. Where do you think these stories originate?”

This would have been more easily answered had there been nothing inside the mountain. But a television exposé released nearly a decade ago showed the mountain below the gardens to be largely hollow. The producers obtained footage of a large scale auditorium and something resembling a supermarket.

“It’s a shelter,” the guide explained, She added that “people have wild imaginations,” that she has heard many conspiracy theories and that some people believe the Baha’is keep live dinosaurs in subterranean caves.

I muse on this anecdote as I ride the train to Haifa. It provides a fine key for unlocking the second stop of the journey. To the naked eye, the Baha’i complex in Haifa is first and foremost a breathtakingly beautiful place, but there’s so much more to it. It is also an extraordinary study in “otherness” within the Israeli and Palestinian framework. It is a bastion of the ultimate outsider, one that forces us to reevaluate our own identities.

The Baha’is are Middle Eastern but they are neither Palestinian nor Arab. The religion originated in Iran and the aesthetic of the Haifa gardens, as well as those in Akko, betrays the love of symmetry found in Persian gardens. The Baha’is are also Western but they are not Ashkenazi-Jewish, nor is their presence part of a global consumerist culture. When we meet one, he or she is often American. The Haifa complex, complete with a library and a conference hall, is strongly reminiscent of Salt Lake’s Temple Square or the Boston headquarters of Christian Science.

Then again, when do we ever meet one? The elders of the faith forbid Baha’is from living in the Holy Land, so as to prevent them from getting involved in its religious wars. The guides are most frequently not Baha’i, though the guards are. My only real conversations with Baha’is took place abroad. It was overseas that I learned of their religion’s tolerance for all other faiths (apart from atheism), its unique history, the plight of Baha’is under the Islamic regime in Iran and more.

Those who are absent can only be seen as a mystery, and every visit to this embassy of a nonexistent country is an attempt at cracking the mystery a bit further. The train arrives at Haifa’s waterfront and I take a bus to the mountaintop, hoping to make it to the noon English-language tour, which is the last of the day. Unfortunately, my new status as a tourist seems to be getting to me and I find myself on the wrong bus.

I call Ruthie, my girlfriend, to moan. “If you’re only five minutes late, they’ll probably let you join late,” she suggests.

“Do you think so? I think they’re pretty tough.”

“Who knows. It’s in Israel, maybe they won’t start on time anyway.”

Yes. The “others” are so foreign that we don’t even know by what sense of time they function.

I end up arriving 20 minutes too late. Past the locked gate is a member of the staff, a Palestinian citizen of Israel. I ask her if I may join the tour in the middle, and mention that I am working on a series dealing with tourist attractions in the Holy Land.

“You know,” I smile, “the rule of the thumb is that so long as libel is not involved, a journalist may write about any group or organization freely.”

“Not the Baha’is,” she states firmly.

Very well. I walk away. The topmost tier may be visited without a guide, and the same goes for the shrine of the Bab itself. I take some photos at the top, then follow the streets down to the temple, only to find out that it is already inaccessible. The opening hours of the Baha’i grounds are even shorter than that of a typical Israeli government office. I come to wonder whether the Baha’is consciously preserve their status as mysteries through unwelcoming policies such as this, or whether being a mystery in this land is such a bad idea in the first place.

How Banana Street came to be

For want of a tour or a community to engage with, I take in as much as I can of the gardens’ extraordinary aesthetics, especially enjoying the large-scale stone eagles that overlook the steps. The bones of the Bab were brought to the Holy Land in 1909, the same year the first kibbutz was established. A decade or so later, Zionism began to adopt modernist aesthetics, and it is modernism that defines today’s Haifa.

Interestingly, when viewed from afar, the flight of the fancy complex and the boxy city appear rather harmonious. It is upon close inspection that they are revealed to be made up of entirely contradicting notions. Looking down toward the port and the neighborhoods at the foot of the Carmel Mountain, I am reminded of an incident in which these notions clashed.

It happened sometime during the 1990s when the city of Haifa decided to renovate the “German Colony,” a lovely strip of stone dwellings built by the Templars — a German Christian society that settled many corners of the land in the late 19th and early 20th centuries.

When the Baha’i establishment caught wind of this, they approached the municipality with a request. It turns out that the street running between the German Colony’s houses points almost directly from the tomb of the Bab to that of Bahá’u’lláh, the faith’s holiest figure. Bahá’u’lláh is buried in the city of Akko, across the bay. It would only take a slight shifting of the street, a 10-degree shift to the east, in order for a symbolic finger to point precisely from the tomb of the prophet to that of the messiah.

I had the pleasure of interviewing a member of the city council on the issue, for the sake of my book, Wonderland, an exploration of oddities in Israel. The council member said that she does not recall a more demanding negotiation in all of her years in office. The Baha’is wanted their finger and were not taking no for an answer. The compromise that was eventually reached is either absurd, genius or both. The street was lined with roundabouts and at each roundabout it shifted ever so slightly, invisibly, to the east. The final tilt comes up to less than one degree, but if this newly-formed arch were to extend across the bay, its tip would touch the resting place of Bahá’u’lláh.

Say what you will of this country. Along a single axis, extending down a single mountain, it gives you a banana shaped street, a mountain of live dinosaurs and the most beautiful gardens west of Isfahan, so much devotion and so many potential misunderstandings.

Read parts one and two of Yuval Ben-Ami’s series, “The Beaten Path.”