In an over-mythologized, pre-imagined land of promise, the Sea of Galilee is a dream waiting to be shattered. Here it is, deconstructed. Part five of Yuval Ben-Ami’s journey. 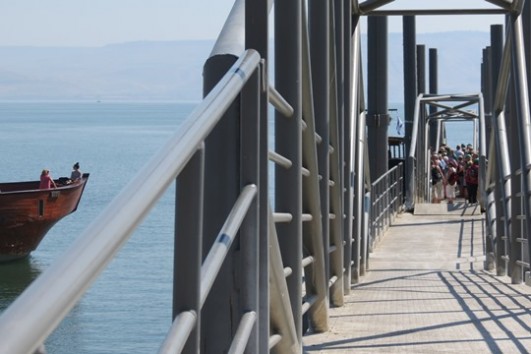 Ruthie, My girlfriend, hates movie spoilers. Tell her so much as one detail of the plot, any detail, and she’ll pass on the entire film. I joke that even knowing the genre would kill her fun. Actually, it’s worse. We once decided to watch “The Long Goodbye.” While waiting for it to download, I hummed the theme song, and she yelled: “don’t ruin it for me!”

Oddly, the very same Ruthie isn’t bothered at all by travel spoilers, which are my pet peeve. I avoid looking at photos of towns and monuments before reaching them, hoping to view them “afresh,” and I get upset when an image of the site appears on the entry ticket. Ruthie devours guide books, I flip through them only after exploring a bit on my own, for fear of swapping my first impression with somebody else’s.

One place where a travel spoiler does come in handy is the Sea of Galilee, if only because its name alone creates a major false expectation. This is not a sea; it’s a lake that wouldn’t even stick out from the maps of most U.S. states. It is called “sea” because the word, “lake,” or rather its Hebrew equivalent, “agam,” was not yet in use when the Bible was written and compiled. Any body of water was “sea” to the Biblical authors, in the same way as any human settlement, no matter how tiny is a “city.” The term “village” was coined only later.

The Sea of Galilee has a long history of surprising visitors. Poet Rachel Bluwstein, who arrived here early in the 20th century from Russia, expected neither the climate nor the beauty nor the sort of peasant lifestyle she would assume. In one of her finer poems, she questions the very reality of her experience.

And what if none of this had ever taken place
What if I never rose up to the garden,
To work it with the sweat of my brow.

Never, in long, hot days of harvest
Have I burst in song, atop a hay-cart
Never have I dipped in the quiet azure and innocence

Kinneret is the lake’s Hebrew name, and its mention conjures a well-defined set of associations in the Israeli mind. It was in the Jordan Valley that the first Kibbutzim were founded, and the lake’s shores are revered as a major cradle of Zionism. We identify the lake with Bluwstein on her haystack, not with Jesus. The Israeli school system offers little if any exposure to the stories of other faiths.

For much of the world, however, the Sea of Galilee is all about the man who walked on its waters. For them it may be small by size, but it is spiritually vast. In short, I’m arriving today at a lake that appears in many dreams. All who arrive here — come with a ready idea of it.

What better a recipe for surprise?

Fans of the lord, not of Lorde

I wonder if there is any site along the lake where the two histories meet, and realize that it would be Kibbutz Ginosar. The members of this old-time kibbutz found a 1st century wooden boat on the lake bottom. Their kibbutz soon became the focus of pilgrim traffic, as the boat could very well have been St. Peter’s own. The kibbutz had everything to gain from opening up to Christian content. Today it is home to a large scale visitor center, where the boat is showcased.

To get to Ginosar, I must go through the town of Tiberias. Look at a single historical image of Tiberias, a labyrinthine city of black basalt, and you have yourself a shattered expectation. Old Tiberias was largely demolished following the war of 1948. It was replaced with several large, mediocre hotels and a brutalistic shopping center overlooking an abandoned mosque.

This isn’t the worst of it. Many beaches around the lake are privately owned and charge entry fees. Those that aren’t, especially on the far shore, often get horrifically polluted by careless domestic vacationers. Pilgrim groups seldom see this. They are taken to carefully-maintained Christian sites on the northern shore: Tabgha, Capernaum, and the Mount of Beatitudes. From there they sail to the dock of Ginosar, which is likewise neat. This is probably best for everybody.

Various and diverse groups make landfall on the dock. There’s a South African group, a Danish one, a group of Indians from Kerala and two entire boatfuls of Finns. Another boat is flying a blue flag with a Union Jack at its corner. I expect Australia, but on closer inspection the stars turn out to be red.

Twenty Kiwis enter the visitor center and pause to shop for souvenirs. I chat with them, confessing my love for their musical compatriot Lorde (described here in a recent post). I expect them to be very proud of Lorde, but they seem too devout to favor pop music, regardless of how intelligent and subtle it is. I switch to a question: what was your best experience on the trip so far?

“It would probably be this,” one gentleman from Wellington gestures back to the dock, “the Sea of Galilee.”

“Well, I guess it would be what I experienced here when sailing it,” he points to his heart, “I mean, I didn’t know what to expect when we came.”

Oh! “And what did you expect anyway?”

The Israeli in me is eager to argue. No, it isn’t all about worship! it’s also about poets on hay carts!

I resist the urge. “And so your expectations were met?”

A miracle on the sea of Galilee! An expectation was met. In a land of countless overlaps, the key must be focus. This gentleman sought a specific spiritual experience and found it. He came for Jesus. I came for both Jesus and the kibbutz movement. I cursed myself with eternal bewilderment.

The 2,000-year-old boat is situated behind a wall of dark glass. I walk in and distracting a guide addressing a group in Hebrew, I tiptoe past them to the wreck. It is more impressive and better preserved than I had expected (okay, enough of that). Illuminated displays line the walls, telling tales of its discovery, its physical makeup and possible beginnings.

While pacing about, I eavesdrop on the guide. She is telling a story from the New Testament, in Hebrew. Another miracle! I’m no born-again, but would like for my compatriots to have some idea why that New Zealander likes our country so much.

“They thought he was a rabbi,” she says of the disciples. “They didn’t know he possessed supernatural powers, and when he stepped off the boat and walked on water, they didn’t expect it!”

Now, this is getting to be too much. The thematic rod I picked in order to fish the Sea of Galilee for meaning is working well. There really are expectations everywhere, but what does that mean? What am I supposed to deduct? Would I find just as many expectations, disappointments and surprises had I chosen to write this post about Pensacola?

Just as I struggle with this, the guide says something unexpected. “This isn’t the actual boat, in a sense” she confesses, “None of this is organic matter. The wood was replaced with artificial wax, just as they did with the corpses at the “Bodies” exhibition.

My eyes dart back to the boat. A moment earlier I used an illuminated chart to decipher which planks were cedar and which carob. I was misled. It is all wax.

Which is when the satori arrives. Above all expectations, one is supreme. Wherever we go, we expect the real. This quality is extra elusive on the shores of a lake so over-mythologized, so pre-imagined. Those who put their trust in Christ or in Zionism need very much for this place to be real, and this is why they tend to overlook the absence of historical Tiberias and the state of the beaches.

I, who believes in neither, navigate instead through rough seas of broken and fulfilled hopes. This is the Promised Land, and promises create expectations. It was promised not only to one group, nor in a single sense, and not all promises were kept, to say the least.

Take Rachel Bluwstein’s fate. She stayed a mere four years by her beloved Kinneret, then moved to France and then back to Russia. She did return in 1919, filled with new hope, and joined Kibbutz Degania, but was soon expelled after being diagnosed with Tuberculosis. “You are ill, and we are healthy, so you must leave,” a member of the kibbutz informed her. She wrote the poem quoted above on her death bed in Tel Aviv, far from the Sea of Galilee, a dream that became real, and then turned into a dream again.

Read parts one, two, three and four of ‘The Beaten Path’.