On we go, deconstructing the tourist trail, except this time it melts in our hands, much like Salvador Dali’s clocks. Welcome to Jericho, oldest city on earth, established right this moment. Part 11 of Yuval Ben-Ami’s latest journey. 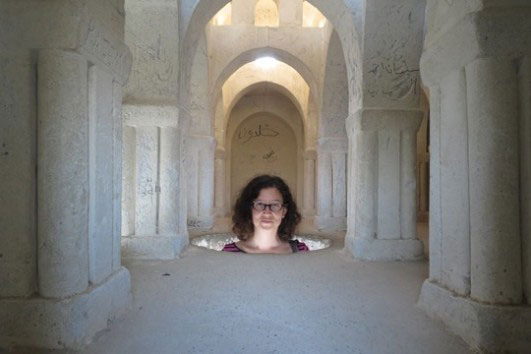 When I visit Jericho with groups, the visit is typically brief. This sweet, ultra-historical desert town is an attractive destination, but is sadly stuck between two far more attractive ones: Jerusalem and the Dead Sea. It ends up being no more than a way station for most.

We usually swing into town, scale “Tel al-Sultan,” the mound that marks Jericho’s original Neolithic settlement, speak as much of the city’s 120 centuries of history as the heat allows (which is seldom much) and then head over to the main attraction: a round stone tower, buried inside the mound and visible thanks to the trench dug by legendary British archeologist Jana Kenyon.

“This,” my Palestinian partner Husam says to the group, “is the oldest structure ever discovered. It’s 12,000 years old, so old that we don’t even know what purpose it served. It could have been a watchtower, a temple, a silo…”

I like to take over at this point and add an illustration: “this is 8,000 years older than Stonehenge.”

The visitors are typically impressed but they are more concerned with a different period in Jericho’s history, that of Joshua’s conquest. They wish to see remains of Jericho’s famous toppled walls. I am no expert on the archaeological debate, but here is what I do know: it appears that most archaeologists today are in consensus that the oasis was periodically uninhabited at the time attributed to the conquest. The ones who do believe a living Jericho existed during the 13th century BC, are those who dig with a bible in one hand and a rake in another.

Try and explain this to a mixed faith group.

Actually, it isn’t so difficult. Archaeology is the world’s most positive science. It can only prove what was, no that anything was not. You never know conclusively what you might find if you dug a foot deeper or a mile further. You only know what you have found so far and what you haven’t.

When the ever rationalist Husam is being too adamant about Rahab being mythology, I pop in with this notion, appeasing the faithful. Then we stop at the shop to buy fresh dates, reboard the bus, and head to the Dead Sea for a dip and a massage.

For two years now Husam and I have been enjoying our little routine, feeling quite comfortable — until our little spiel about the oldest structure in the world was knocked down by discoveries made in Gobekli Tepe, in Turkey. To be concise: the temple at Gobekli Tepe, incredibly preserved and featuring stone carvings of ducklings, wild boar and divine penises, was shown to be just as old as our round tower. True, Jericho remains the oldest city on Earth. No settlement was found at Gobekli Tepe and the temple was likely used by wandering hunters and gatherers, but our “oldest structure on earth” is no longer the oldest. Our own walls of Jericho have fallen.

A wrinkle in time

One thing that complicates exploring this country is that many of its wonders are incredibly ancient. The sands of time gather over them, shrouding them in mystery and controversy, hiding treasures away or rendering them a misleading appearance. Our minds struggle to grasp the idea of the ages. They often fail, and consequently so much of what is around us appears ageless. Tel al-Sultan, which is made up of the ruins of hundreds of different communities piled one on top of the other, looks like a pretty nondescript mound of soil, something you would find on the outskirts of a building site.

Ruthie, my girlfriend, joins me for my day in Jericho. She has never been. Like other West Bank cities designated “Area A,” Israeli law makes Jericho is off limits to us. We are stunned by how near it is. The drive here from central Tel Aviv lasts an hour and 10 minutes. The IDF’s position on the road leading into town is currently unmanned. There’s a Palestinian checkpoint a bit further, but the policeman waves us in with a smile.

Our first stop is for food. We get shawarma and enjoy it by the fountain on the main square. Ruthie is vegetarian, but only in Israel. This way she can explore culinary traditions when traveling. The UN recognizes Palestine within 1967 borders, hence, though Jericho is entirely besieged by the IDF, which keeps its residents under military rule, for culinary purposes it qualifies as abroad.

From the square we head to the cable car that climbs the Mount of Temptation. Tradition has it that Jesus spent 40 days on this mountain, fasting and meditating while the devil was attempting to taunt him. A monastery of cave dwelling monks has existed here since the fourth century, and in the 19th century was expanded with a beautiful stone structure, clinging to the cliff face.

As we step off the gondola we notice a sign indicating that the monastery closes to visitors at two o’clock. It is now 1:58 p.m., and so we rush up the stairs leading to the entrance. Even in the most patient city on earth, time may shrink into a two-minute slot. When this happens, the centuries vanish, the mysteries become unimportant. All that matters is whether the warden is generous.

He is. We get to visit the handsome premises and enter the grotto that is said to be Jesus’s mountain perch, but something has happened. Jericho’s elusive time has grasped us. From now on we are on Jericho time, flexible time.

We can sense it as soon as we return to the valley and climb the mount. Music drifts over it, German music. We skirt a small rise and discover its source. A heavily pregnant woman stands there, although on closer inspection she turns out to be fake — nothing but a beach ball tucked under her dress. She carries an old fashioned cassette player. We step over, say hi and learn that she is an art student from Hong Kong on an exchange program in Jerusalem.

“My friend and I get everything for free this way,” she says pointing to the mock pregnancy. “We get free admission to all the sites, we even rode the cable car for free.”

“Is it Max Raabe?” I ask, referring to the contemporary German star, whose big band orchestra reproduces those old favorites.

I nod, fascinated by how curiously time flexed about us. We are standing on the product of 12,000 years of civilization, hearing music from the 30s and refusing to believe that it was really from the 30s. The student’s appearance is incredibly contemporary, her attire goes beyond modern, beyond post-modern. It is post-post-modern. Her one arm is entirely adorned by a tattoo. Her music player is an uber-hipster treasure, her eighth-month belly took 10 minutes to arrange.

This seems like a particularly good time to visit a site that dates back to a period not yet referred to in this series. So we get in the car and drive a mile north to Hisham’s Palace, an 8th century Muslim khalif’s residence. We are driving through Jericho’s sparse, village-like townscape. This time of year it is a town of only over 30,000 residents. In summer, only a third remain. All who can escape the heat, do.

Jericho’s appearance has changed dramatically during my lifetime. When I was a child, before the current restrictions were imposed, my family would pass through town whenever traveling north from our Jerusalem home. The northern part of Jericho was then a mud city. Clusters of mud dwellings covered the short mesas lining the road. Those have all been replaced by concrete. Summer Jericho isn’t winter Jericho. 1984 Jericho isn’t 2014 Jericho. This eternal city is entirely subject to flexible time. When Palestinian and Israeli daylight saving times fail to correspond, it falls back one hour from the settlements surrounding it, from the cars driving past it.

Ruthie is disappointed that Hisham’s Palace is in ruins. She anticipated a proper palace, and instead gets a few stone foundations and scattered remains of past grandeur. I have seen the best stonework of the palace presented in Jerusalem’s Rockefeller Museum, and assumed that little remained on the ground.

There are, however, at least three wonders to behold here. One is a massive decorative element: an ornate stone star, framed in an ornate stone two meters in diameter. The second is a scale model of the palace in its heyday. It sits on metal scaffolding and one can stick their head inside and take a peek (as can be seen in Ruthie’s photo, above). A third wonder is the mosaic on the floor of the palace’s former diwan. It shows three gazelles grazing by a beautiful tree, one of them being eaten by a lion.

These gazelles, of course, cannot possibly all be grazing at the same time. Otherwise the ones not yet devoured would have surely escaped the lion. We are gazing at two frozen moments at least, overlapped in one stunning mosaic, by a tree that will always be green.