As the bulldozers start building the Jewish town of Hiran, the children of the Bedouin village Umm al-Hiran are joining the struggle to save their homes. 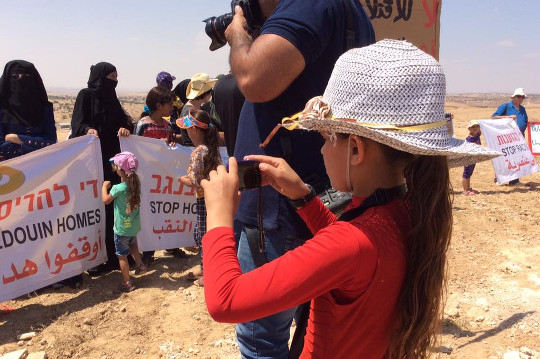 A Bedouin girl from Umm al-Hiran takes photos at a demonstration against the destruction of the village, August 27, 2015. (photo: Michal Rotem)

The children of the unrecognized Bedouin village Umm al-Hiran started their summer vacation in an usual way. The future of the village in which they grew up in is unclear, the struggle against the demolition of their homes is gaining traction, and the bulldozers are working tirelessly nearby to establish the Jewish town of Hiran.

Despite the fact that the Negev Coexistence Forum for Civil Equality organizes its yearly photography workshops during the summer, it was clear that this year it was of utmost importance to do it in the summer, despite the heat.

In May, Israel’s High Court of Justice refused to cancel eviction orders against Umm al-Hiran, home to 700 men, women and children of the al-Qi’an tribe. The state wants to demolish the village and relocate the Bedouin residents to the town of Hura – for the sole purpose of building Hiran over its ruins. Umm al-Hiran’s adjacent sister village, Atir, will also be destroyed to expand the man-made forest of “Yatir.”

Those who came to last week’s protest against the bulldozers, which are working hard to build the new Jewish town, were surprised to find children with cameras strapped around their necks, documenting the demonstration from every possible angle. 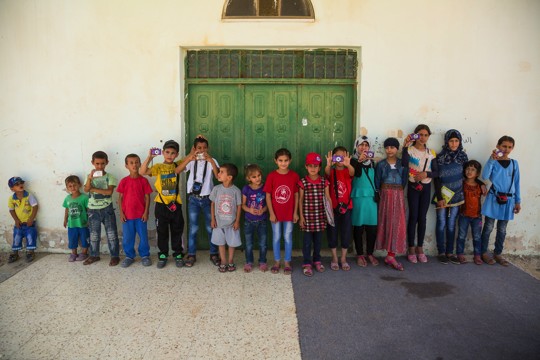 The children of Umm al-Hiran who are participating in the photography workshop. (photo: Udi Goren)

Over 10 meetings, volunteer photographers taught the children how to work the camera and take photos. This was also an opportunity for the photographers themselves to come to Umm al-Hiran and photograph what is happening. In one of the meetings, the children themselves went to the bulldozers and began taking photos, surprising the policemen who were sent there to stand guard. The children, and the adults who followed, demanded that the building cease until all sides reach an agreement that will allow the residents to continue living in their village.

The workshop was made possible due to a successful Headstart project, which was able to fundraise enough money to put on two workshops. Now, the Negev Coexistence Forum for Civil Equality is organizing another Headstart project to fund future workshops.

Israel’s High Court will decide in September whether to hold another hearing — this time with an expanded panel of judges — on the validity of the eviction notices. Furthermore, Adalah — The Legal Center for Arab Minority Rights will appeal to the district court over the Magistrate’s Court’s decision to validate the notices in the first place.