On the eve of November 7, 1938, following the brutal expulsion of his family to the Polish border, a 17–year-old Jewish youth, Herschel Grynszpan, walked into the German embassy in Paris. He was carrying a recently-purchased pistol in his pocket. Grynzszpan asked to see an official, was brought to the office of Third Secretary Ernst vom Rath, pulled out his gun and pumped five bullets into him. Grynszpan’s act was a protest against Nazi Germany’s policies towards its Jews. Tragically, as so often happens when persons are reduced to representations of people or regimes, Grynszpan shot the wrong man: vom Rath was considered to hold anti-Nazi attitudes, and had been attracting the interest of the Gestapo.

Vom Rath died of his wounds two days later. Hasbara Minister Goebbels used his death to organize the largest pogrom in Nazi Germany up to that point, which was termed by the cynical Berliners “Reichskristallnacht” –  “The Reich’s Crystal Night” – in order to mark the official essence of the pogrom. SA goons and other good German citizens murdered 91 Jews; the mobs demolished 7,000 Jewish businesses and burned a thousand synagogues; thousands of Jews were attacked by German patriots, often drunk; about 30,000 Jews were incarcerated in concentration camps.

When the smoke cleared, the regime instituted several other iniquities: it confiscated the insurance money intended to compensate the Jews for the damage to their property; it levied a fine of a billion marks (about $5.5 billion in 1938 rates) on the German Jewish community. All of Germany’s Jews were considered guilty of Grynszpan’s act. (He himself would disappear, and in all likelihood was murdered in some concentration camp in late 1944 or 1945.)

In the last two weeks, there were three incidents of rape, all allegedly carried out by non Jews – two allegedly by Sudanese and Eritrean refugees, and one allegedly by a Palestinian illegal resident – and the Israeli government and media lost their minds. Those rape incidents were prominently displayed in the media, and the usual creeps rolled from under their stones. MK Danny Danon wrote on Thursday night (Hebrew) that “it looks as if an enemy state of infiltrators was created within Israel. It is time to declare war on it, and state one goal we must stand [inarticularteness in the original – YZG] – expulsion now! Before it’s too late.” MK Michael Ben Ari, who was refused entry into the United States due to his terrorist affiliation, led a small demonstration that night toward refugee support centers in southern Tel Aviv. According to reports, there were some 10 Kahanist demonstrators, who shouted at female counter-demonstrators they hope they would be raped by foreigners. A refugee center reported that they received threatening phone calls, including one saying “I want your address so I can burn you, to do your girls what they are doing to our girls, you daughter of a whore.”

This phone conversation came several hours after Eli Yishai – no small fry, just the Minister of the Interior, one of the most powerful in the Western world, and the inheritor of most of the powers of the British High Commissioner – called for the detention and expulsion of all the refugees (Hebrew). Yishai claimed most of the refugees are “criminals,” and added that anyone aiding them is a “yefeh nefesh (bleeding heart) who wants to harm the Zionist enterprise.” Yishai called the two rape incidents “a threat to our Zionist vision.” The crime attributed to a small number of people will serve as reason to harm all the Africans living in Israel.

As the Israeli government puts little stock in freedom of information, I couldn’t find the accurate number of rape incidents in Israel in the last few years. Yet, according to the Authority for the Advancement of the Status of Women, 4,705 cases of sexual crimes were opened in 2010, 78 percent of them due to complaints by women. In the first ten months of 2011, the number was 3,672. Assuming the rate remained the same during the last two months, we can extrapolate the number to be at some 4,406 cases (Hebrew) – about 12 reported incidents per day.

Not all these incidents are rapes, but we can assume that the rate of rape cases was high: according to reports from 2009, Israel is eighth in the world in the numbers of reported rape cases, with a rate of 17.6 rapes to 100,000 residents. Given the population mix of Israel, and the fact the media salivates over every case of rape by a non-Jew, we can safely assume most of the rapists are kosher Jews. Most rapes do not happen in the streets, but in homes, by a person the victim knows – often knows well.

So why do the media and the government focus on the few rape incidents attributed to refugees? After all, if the goal is rape prevention, then by Yishai’s standard we should arrest all of the men of Kiryat Malachi, or at least those with political pretensions – one of the town’s mayors is now suspected of rape, and another (former president Moshe Katsav) was convicted of it – and find a country dim-witted enough to take them.

None of this is likely to happen, and with good reason. When it comes to Jewish men, they enjoy – again, with good reason – the presumption of innocence, even though they are much more of a risk to Jewish women than refugees are. The rate of yarmulke-wearing males among rapists is a phenomenon; I still laugh when I remember the pedophile rapist coming to court with a “Jehova is the King” t-shirt. Ultra-Orthodox Bnei Brak has already earned the sobriquet “Israel’s pedophilia capital” (Hebrew). Jurist Dr. Aviad Hacohen insists (Hebrew) that 95 percent of the sexual attacks in Jerusalem are carried out by Orthodox and ultra-Orthodox Jewish men. Would Eli Yishai support detaining all Orthodox and ultra-Orthodox men in concentration camps – errr, sorry, “detention facilities?” Of course not. 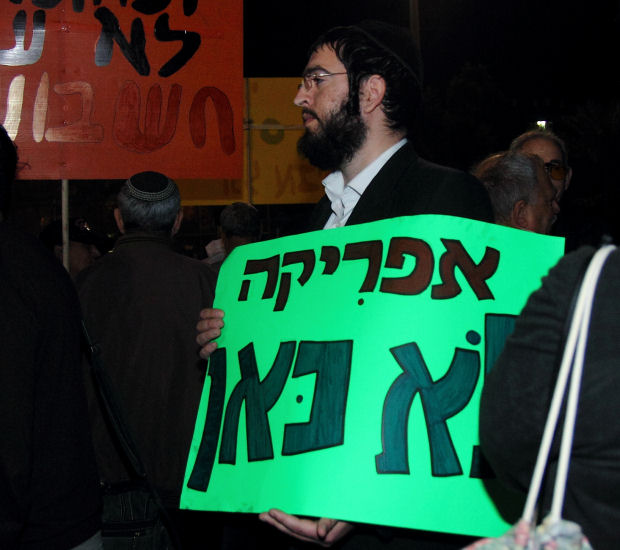 So what’s going on? It’s simple, really. When the Israeli media reports a rape by “foreigners,” it engages in dog-whistling. It informs its readership that something much worse than rape took place: the defilement of the blood and honor of the Jewish people, the defiling of the honor of a daughter of Israel.

It’s easy to forget, when you hear Ben Ari, Danon and Yishai’s latest statements, that they were inciting against the refugees long before these rape incidents took place. Ben Ari led several demonstrations against them, emphasizing supposedly illicit affairs between refugees and Jewish girls. Yishai termed them “spreaders of disease” several years ago, and led a crusade to deport the children of foreign workers born in Israel. Danon conducted possibly the most demented symposium in the history of the Knesset, arguing that Jewish girls are kidnapped in massive numbers to Bedouin villages – even though the police flatly said it is unaware of even a single such case of kidnapping (Hebrew).

So now one of the most powerful ministers tells the mob that all refugees should bear the sins of their fellows – and to hell with the rule of law and with the simple fact the suspects have not yet been charged, let alone convicted. This isn’t about the law; this is about a war in defense of Jewish honor. Danon, Ben Ari and Yishai are playing with fire: if an Israeli Reichskristallnacht breaks out, a pogrom against the refugees, they – and the media – will not be able to say their hands are clean from blood.

NGO threatened with arson and violence for helping Africans