A new Livni ad warns the public that Netanyahu and Lieberman will bring an ‘international boycott’ on Israel.

The condemnations Israel has suffered following the government’s decision to set in motion the development plans for the area known as E1 didn’t affect Prime Minister Benjamin Netanyahu’s standing in the polls, but they certainly registered with some Israelis. One of the greatest fears of the old Israeli elite – that the occupation will result in international isolation, sanctions and boycott – seems to have taken a major step into materializing.

This fear is evident in a new billboard campaign Tzipi Livni’s new party, Hatnua, launched this week. One of the ads even features something that seems like a reference to the Boycott, Divestment and Sanctions campaign. 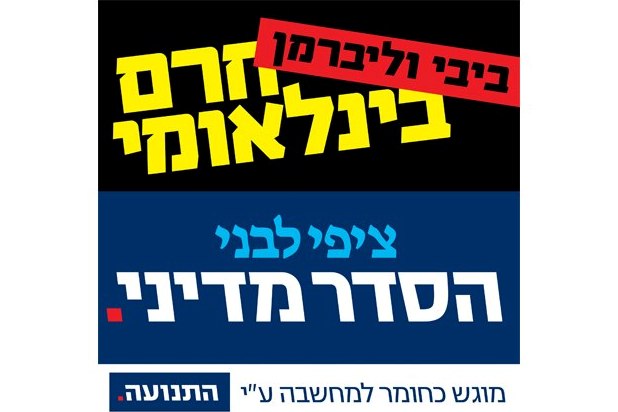 By the way, I don’t buy Livni’s message – at least the part about solutions. All indications are that Livni’s positions are even more hawkish than Olmert’s (this was the case in Annapolis), and it seems as if she is simply taking advantage of the room created by Labor’s leader Shelly Yachimovich’s refusal to discuss the Palestinian issue in her campaign. I agree that a growing number of Israelis are concerned by the international pressure and even the boycott movement – despite the minor effect it currently has on Israelis’ lives – and might therefore be inclined to reengage with the Palestinian issue. However, Netanyahu’s supporters and allies seem less troubled by such issues. For now.