It does not have to bring the Israeli economy to its knees, or even close, to force an end to the occupation. 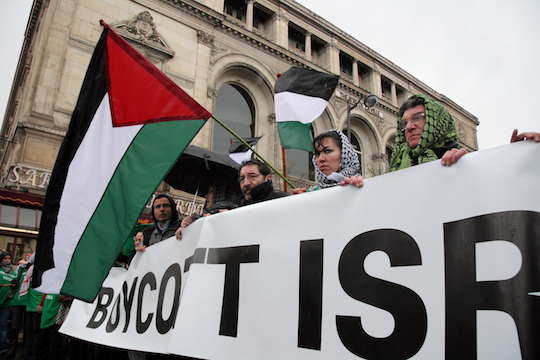 Now that it’s a very common, almost consensus view that Israel faces isolation and serious economic pain if it does not end the occupation, the skeptics are weighing in. They’re saying that the BDS movement, academic boycott and Europe’s anti-settlement policy toward Israeli businesses, even though they are intensifying, have hardly made a dent in this country’s material quality of life. (Here, here, here and here.) Deals are still being made, rock stars are still coming to perform, Israel’s economy is still outdoing most of those in the West. As for the future, such commentators, who are by no means all from the right, are saying that even if the number of boycotters grows, they will still amount to drops in the bucket, and Israel’s economic and political power will thwart any attempt to pressure the country’s leaders into changing course.

I think they miss the point. It’s true that the Israeli economy as a whole is hardly feeling the boycott (though a fast-growing number of companies are), and it’s unimaginable that the economic and political isolation of Israel will ever approach that of apartheid-era South Africa (for lots of reasons, including Israel’s exalted standing in the U.S.). But it doesn’t have to approach what happened in South Africa. The boycott doesn’t have to bring the Israeli economy to its knees, or anything close, for the Israeli body politic – the public, the opinion-makers and the decision-makers – to decide to end the occupation. All the boycott has to do is keep growing, drop by drop – yes, like Chinese water torture – for it to succeed. Because finally, the boycott is not an economic war against Israel, it’s a psychological war, and even the skeptics would agree that it’s already had a deep, damaging effect on this country’s will to continue fighting for the West Bank and Gaza.

The experience of the last nine months, starting with Stephen Hawking’s no-show in Jerusalem for the Presidential Conference – which brought the boycott movement into the mainstream, a process that has been escalating ever since – has begun to work a profound change for the worse in Israelis’ view of the country’s future. It’s been many years since they believed it was going to improve, that peace was a realistic possibility. Except for a short-lived interlude of belief in “Sharon’s way” – unilateral withdrawal – after the 2005 disengagement from Gaza, there’s been a sense of stagnation here since the Second Intifada killed the Oslo Accords in late 2000. The Netanyahu years have been secure but grim; the only movement has been toward more settlements and more loathing for leftists and Arabs, more of what the country is already stuffed full of. Five years of bloat and stagnation. It’s not for nothing that the new hit of the last election, Yair Lapid, named his party Yesh Atid – There Is a Future. That’s what the public wanted – a future, something to look forward to, because the future they saw was nothing but more of the same bellicose rut interrupted by periodic wars.

But Israelis had learned to live with that and they could go on living with it. The future, if not inviting, seemed tolerable. And that’s what the boycott has changed: Suddenly the future does not look like more of the same. It looks like it’s going to be increasingly worse than the way things are now. The world is turning against us, and not just in word, but in deed. Even Germany is starting to crack down. It’s not going to get any better, the occupation is not going to win us any new friends, but evidently it is going to make us a lot of new enemies.

In the Israel Democracy Institute’s “Peace Index” poll for January, Jewish respondents were asked to rate the chances that the boycott will “intensify and harsh sanctions will be imposed on Israel, including a full boycott of the export of products from Israel.” Fifty percent said the chances were high, 47 percent said they were low.

This is the idea that the rise of the boycott has planted in the national consciousness: that for Israel as the oppressor of the Palestinians, there’s nowhere to go but down. There’s nothing to look forward to but more rejection, further isolation. And that’s something Israelis can’t live with. That’s a future they will not tolerate.

So as long as the boycott goes forward, even in fits and starts, Israeli anxiety over what the occupation is doing to their future will deepen. Because what do the nationalist powers-that-be have to stop its momentum? Better hasbara? What future do they have to offer Israelis? More settlements? Bombing Iran? Eternal vigilance against Islamofascism? Except for the right-wing true believers, who are a minority here, that’s not what Israelis want. That’s what Bibi wants, not the public. The public wants to look up at the sky and not see black clouds, which are just what the boycott has become.

And sooner or later, the boycott is probably not going to be the only thing bearing down on the Israeli status quo. The Palestinians in the West Bank have been amazingly quiescent for the last decade; they’ve hardly begun to exercise their options for making Israel pay for their subjugation. They still haven’t gone to The Hague, they haven’t tried “people power” demonstrations to the wall, they haven’t demanded enfranchisement as Israeli citizens, they haven’t dissolved the Palestinian Authority and “handed the keys back” to the conquerors. They’re not going to let Israel get off so easy forever. And whatever steps the Palestinians take – except terror, which they seem to know will backfire – will create a synergistic effect with the boycott.

Because of this, I believe the nationalists’ control of this country is becoming vulnerable, and so is the occupation, their pet project. I’m not saying a radical transformation of Israel is inevitable, but it’s possible – thanks to the boycott. Before Hawking put the movement into gear, there was nothing out there to challenge the status quo, and there’s nothing else out there to challenge it now. Only the boycott. If it keeps growing, there may be a future.