Trauma and racism are an inescapable part of Israeli society, especially on days when the drums of war are beating. 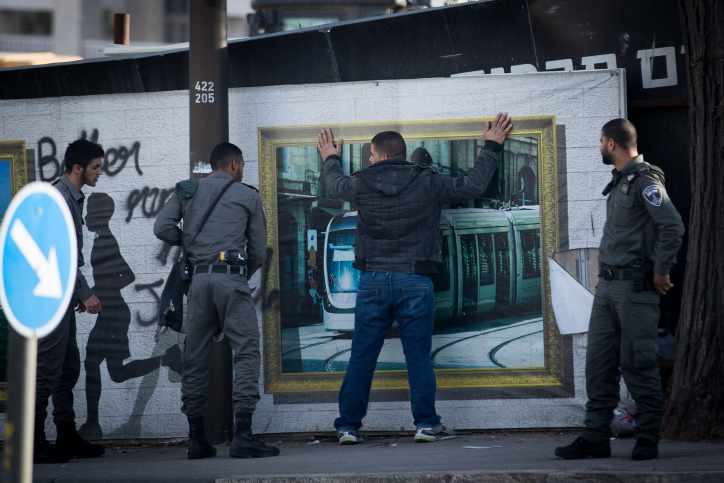 The bike ride along the outdoor platform of Tel Aviv’s central bus station takes about a minute north to south.

The area, long neglected by the city, has become home to junkies, sex workers, the homeless, asylum seekers, and Palestinian day laborers.

It’s also a hub for Israeli soldiers on their way to or from base. Old, half-shredded posters of Eritrean pop singers and fundamentalist Jewish religious figures warning of the End Times line the drab concrete wall that does full justice to the building’s brutalist architecture.

I usually take my time and walk through, out of respect for pedestrians trying to make their way to the sherut (“service”) taxis — yellow mini-buses that travel across the country to places as far as Tiberias or Ashdod whose drivers share a single common attribute: unyielding impatience.

This morning, however, I was late for work and couldn’t afford the time to saunter. I crossed the street and turned left on the platform, peddling past a group of soldiers standing at the northern entrance to the station.

Next to them were five female Border Police officers surrounding a man in his 30s in sagging pants and a gray hoodie. They were examining his green ID card — he must have been Palestinian laborer from the West Bank. I slowed down, weary from a sight that repeats itself ad nauseam only to see that they had returned his ID and let him go. I breathed a sigh of relief and continued on.

In between the sheruts headed for Netanya and Nazareth stood a line of regular taxi cabs, their drivers standing, chatting among themselves in a half-circle, smoking cigarettes.

“Special deal for Israelis!” one them yelled as I rode past.

“Free rides to Ashdod and Ashkelon — for Israelis only!” he shouted once again, most likely as a gesture for those who may have family in the southern cities, the latter of which came under heavy rocket fire the night before.

“What about Arabs?” another driver asked, laughing. 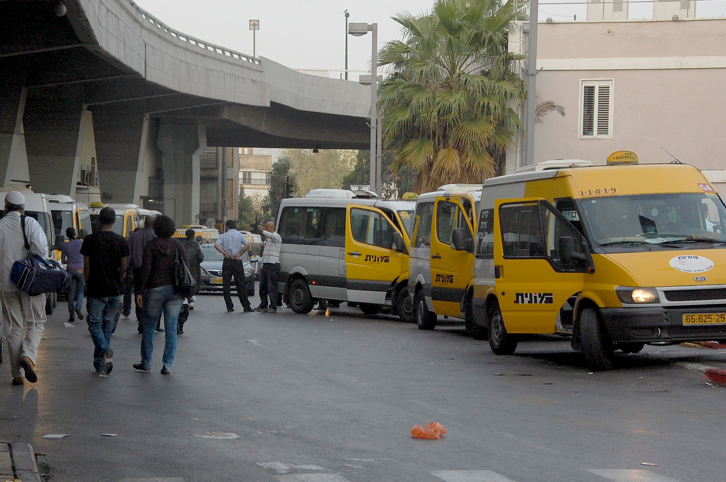 I rode on until I reached the station’s southernmost entrance, where a young boy dressed in soccer gear and a sports bag draped over his shoulder stood alongside an older man — perhaps his father or coach. The two were pleading with an armed security guard.

“There’s no reason to call the police!” the father-coach said in a thick Arabic accent, his voice barely below a yell. “Why would you get the police involved?”

The boy simply looked on.

That minute-long bike ride was all I needed to be reminded of the fear, trauma, and hatred that exist under the surface in Israeli society, erupting most potently on days like this — when war feels inevitable, almost natural.

It’s entirely possible that the timing of these three successive incidents was random. After all, out-in-the-open racism has become a feature of Israeli society.

And yet, it was hard to imagine that it was completely disconnected from the full-blown war that nearly broke a few hours earlier, when, following a botched IDF operation deep inside Gaza, retaliatory strikes from both sides escalated at dizzying speeds. 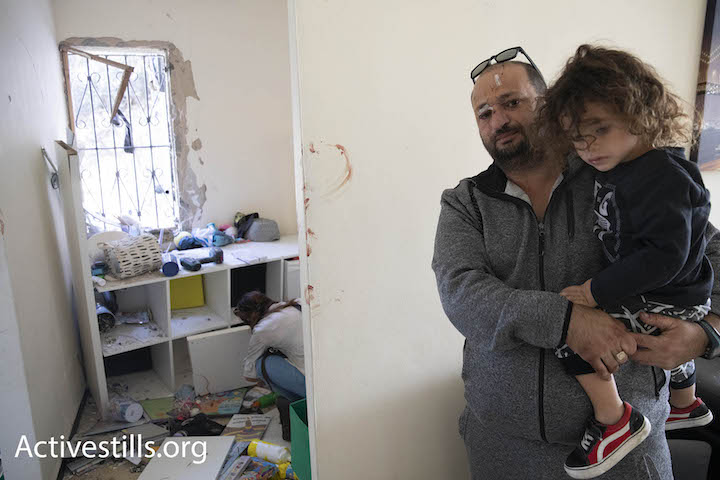 An Israeli man and his daughter come back to their house after it was hit by a rocket fired by Palestinians in the Gaza Strip, Ashkelon, south November 13, 2018. (Oren Ziv/Activestills.org)

Palestinians fired over 400 rockets into southern Israel in a day’s time, killing a Palestinian man in the city of Ashkelon and wounding dozens. Israel, for its part, launched more than 150 airstrikes in Gaza, killing six Gazans, and leveling a major television station, a hotel, and the Hamas intelligence building.

For now, both Israel and the Palestinian factions in Gaza have reportedly agreed to an Egyptian-brokered ceasefire. Things may just go back to normal.

Yet the minute-long bike ride along the central bus station echoed the fever pitch racism we witnessed during the last Gaza war in 2014. Palestinian citizens of Israel were fired for speaking out against the war on social media. Both Palestinian and Israeli left-wing activists were physically beaten in the streets of Tel Aviv, Jerusalem, and Haifa, by right-wing thugs. Racist incidents, and rhetoric, seemed to spike. Speaking out against government policies or the IDF’s actions became, almost overnight, beyond the pale.