A six-year-old Palestinian girl was run over on a main road while begging for change in northern Israel. She is one of many Palestinians sent over from the West Bank, where both poverty and despair is only growing. 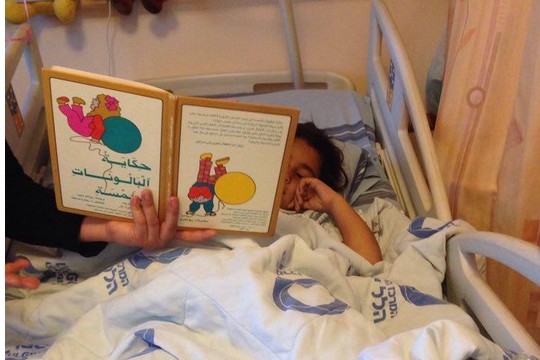 Six-year-old Fatma lays in a hospital bed after being run over on a main road in northern Israel. She is one of the many children sent from the West Bank to beg for money. (photo: Inbal Sahar)

The above photo is of Fatma from Hebron. She is six-and-a-half years old and she has a full time job. She was smuggled to Israel over a month ago, and since then she has been begging for change at the Kafr Kara junction in northern Israel. She sleeps in either a nearby mosque or the adjacent town of Barta’a — it isn’t exactly clear. She hasn’t had a shower in a while, and most of the time she is hungry.

Her parents likely earn 30-50 shekels a day from this job, and there are many like her. Up until a few months ago, young boys sold lighters and pens at the junction, but following the latest wave of violence, they were replaced by skinny, dirty girls who stand around with sad eyes, looking disheveled and exhausted.

Many who drive through Wadi Ara see these children. They know this “phenomenon,” their hearts sink. First off, children who walk around a main road are in constant danger. Secondly, the sight is simply horrible. Of course there are cynical, shameless parents who make money off of their children. But perhaps the father is in prison? Maybe he is dead? Maybe there is no mother around? What if they live in the street?

What do we know?

The Israel National Council for the Child advises not to give these children money so that they do not keep coming back. This is a classic response by those who have it all. What if these children face abuse for not bringing back enough money? Maybe they will be refused food? What about the NIS 40 they bring home, which could be used to buy a few pieces of bread and a liter of fuel in the freezing winter? The council does its best to care for Israeli citizens using the shrinking budget allotted to it from the Israeli government. The police cannot do a thing. The welfare authorities have their hands full — and when every third child in Israel lives below the poverty line, what will we do with the Palestinians?

The locals are shocked by the sight. They are upset by the heartless pimps who make money off small children. It is also believed that as subcontractors they employ slightly older children who are put in charge of the younger ones. The former often sleep under a nearby tree and keep an eye on the goings on.

This week Fatma was run over while working, apparently because she heard the police coming she ran into the road. She has been hospitalized for a few days, and miraculously survived without any major injuries. And now that she is being “released,” one must wonder: where to?

In July 2006, the Special Committee for the Rights of the Child, headed by MK Shelly Yacimovich (Labor, Zionist Union) met in the Knesset to discuss the phenomenon of child beggars at junctions. Many people attended the meeting, including MK Dov Khenin, then-Welfare Minister Ya’akov Margi, police officers from Wadi Ara and Jerusalem, members of the Israel National Council for the Child. and others. Everyone wanted to deal with this terrible situation, and everyone agreed that there is no way to start dealing with it without budgeting, dedicating resources, and coordinating with all the relevant authorities — including the Palestinian Authority and Palestinian civil society groups.

There have been meetings, position papers have been written, legislation has been amended. And yet the welfare authorities have been suffering ever since. Those who care for the weak have faced restrictions. Palestinian society has also deteriorated; resources are scant, the PA is falling apart, and apathy and hatred is growing. Poverty puts parents in a position where they are willing to send their young children to work. What kind of generation is growing up here? 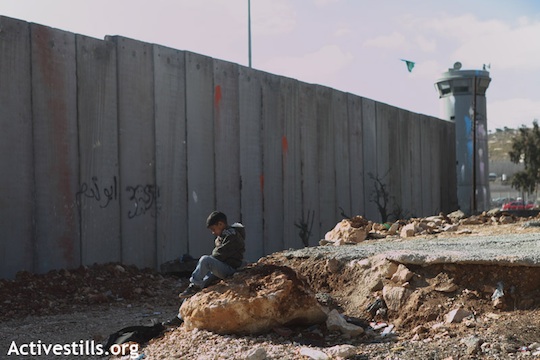 We’re horrified, we want to help, our hearts sink. Who wants to see such a sight? Why did we spend billions on a wall if not to shield us from all those horrific sights? Is Israel leaving a crack in the wall to allow these children to bring home a few shekels to their families in order to make sure that the West Bank doesn’t erupt?

And if Fatma returns to her mother in Hebron, what will be her fate? Will she fade away, or will she find herself working as a peddler at the Qalandiya or Tulkarem checkpoints, working for other pimps? Maybe she’ll be hit with a stray rubber bullet, or tear gas, or stones? Maybe other children will be cruel to her? The more the average person tries to think about how he can help these children, he comes to the conclusion that he cannot. There is nothing one can do but let this situation play out, to let these people survive the way they choose, since there is no better option.

All as part of the occupation. This is its face. These things happen all the time, we simply do not hear about them. And they will continue to happen.

Those who want to help these children needs to understand that the first step is ending the occupation. It is difficult to say that as a society, we are doing everything we can to get there.

Yasmine Halevi is a resident of Pardes Hanna. This article was first published in Hebrew on Local Call. Read it here.