In the controversy over Obama’s candidate for the next U.S. Secretary of Defense, the right-wing American Jewish elite has once again asserted that the term ‘pro-Israel’ is a code word in Washington for, among other things, a belligerent foreign policy on Iran and enabling Israeli occupation. 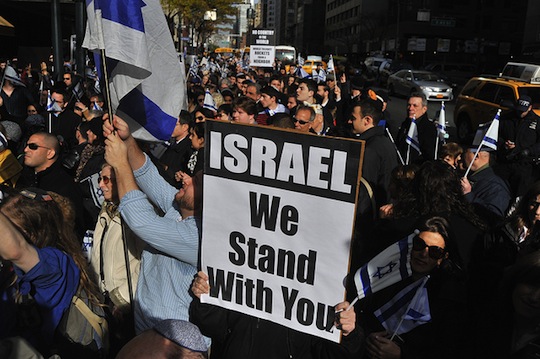 The sheer volume of articles that have appeared in American media over the last few weeks surrounding Obama’s potential appointment of former Republican Senator Chuck Hagel as next U.S. Secretary of Defense is astonishing. Everywhere you turn, there are reports, op-eds, features and blogs about Hagel. It almost feels like the issue is making more noise than the “Israel firster” fiasco a year ago.

That may be because the same far-right Emergency Committee for Israel that led the smear campaign against the Center for American Progress and Media Matters is now leading the same witch-hunt against Hagel, labeling him anti-Israel and even anti-Semitic. They are joined by hawkish Republicans, conservative pundits and, of course, the ADL and others within the so-called “pro-Israel” American Jewish establishment, who are all ganging up on Hagel because he has expressed foreign policy positions on Iran and the Israeli-Palestinian conflict that do not line up with the AIPAC/GOP ideology.

This is not the first time “pro-Israel” leadership has defamed a public official – or even a Republican one. AIPAC did it to Charles Percy in 1984, and to Paul Findley in 1982, and, 30 years later, they are still going strong.

It is time to acknowledge, bluntly, that certain major Jewish organizations, indeed, the Conference of Presidents of Major Jewish Organizations—also, the ADL, AIPAC, the American Jewish Committee, political groups like the Republican Jewish Coalition, along with their various columnists, pundits, and list-serves—are among the most consistent purveyors of McCarthyite-style outrages in America today.

As I have written many times in the past, Israel has become a major wedge issue in American politics. In fact, the very first post I ever wrote on +972 more than two years ago addressed the problematic use of the term “pro-Israel.” In the last two years, it has only gained more explosive political traction, as its definition is increasingly monopolized and leveraged by the abovementioned major American Jewish organizations. This was most recently evident by the Obama-Romney election and the way Israel was utilized to try to defame the all too “pro-Israel” Obama by a variety of groups, from the Republican Jewish Coalition using Prime Minister Netanyahu as a poster boy in their election campaign, to Ron Lauder and his iVoteIsrael campaign.

Thanks to this right-wing American Jewish elite, the term “pro-Israel” has become a code word in Washington for, among other things, a belligerent foreign policy on Iran and of course enabling Israeli occupation and the country’s holistic shift to the right. Thanks to them, any criticism of Israeli policies is tantamount to being “anti-Israel.” Thanks to them, anti-Semitism has become a cheap insult devoid of meaning. Thanks to them, by engaging in such vitriolic attacks against American public officials in order to sway policies, these Jewish groups look like they are actually trying to embody the worst myths of anti-Semitism levied against Jews in history: that we are working relentlessly to exert global control through the channels of media and politics.

More than just neo-McCarthyism, this is a deep-seated clash of ideologies with global consequences: One one side, roughly, is the “pro-Israel” right – hawkish Republicans, the Christian right and, by default, the Israeli government and its destructive policies. On the other side is are left-wing think tanks, media organizations and journalists, a handful of Democrats and Republicans, a few vocal American Jewish organizations and figures, and of course President Obama (although only as regards his rhetoric, not his actions).

This deep division originates in and is propagated by the American Jewish establishment, first and foremost AIPAC, and by extension, the State of Israel. It is between those that interpret their Jewish identity as the state of being in constant fear, understanding their possibility for a secure existence only through force, and those who understand anti-Semitism is still alive and kicking, but refuse to let it dictate their lives.

As Brent Sasley put it, “as the struggle over how to define ‘pro-Israel’ continues into 2013, nothing less than the very identity of the American Jewish community is at stake.” This division over Israel has been a defining characteristic of the American Jewish community since Israel’s establishment. In recent years, though, it has permeated American politics to the point that the “pro-Israel” paradigm is being aired out in almost every major American political event.

The Chuck Hagel affair not only highlights the very palpable divisions that cut across American Jewry –  from Bill Kristol to Abraham Foxman, to Peter Beinart, to Judith Butler – but also the new political and ideological alignments being formed in America, where your stance on Israel is a major litmus test.