The demolitions in Qalansuwa, Umm el-Hiran, and Israel’s new ‘land grab law’ are one and the same. So is the obligation to oppose them. 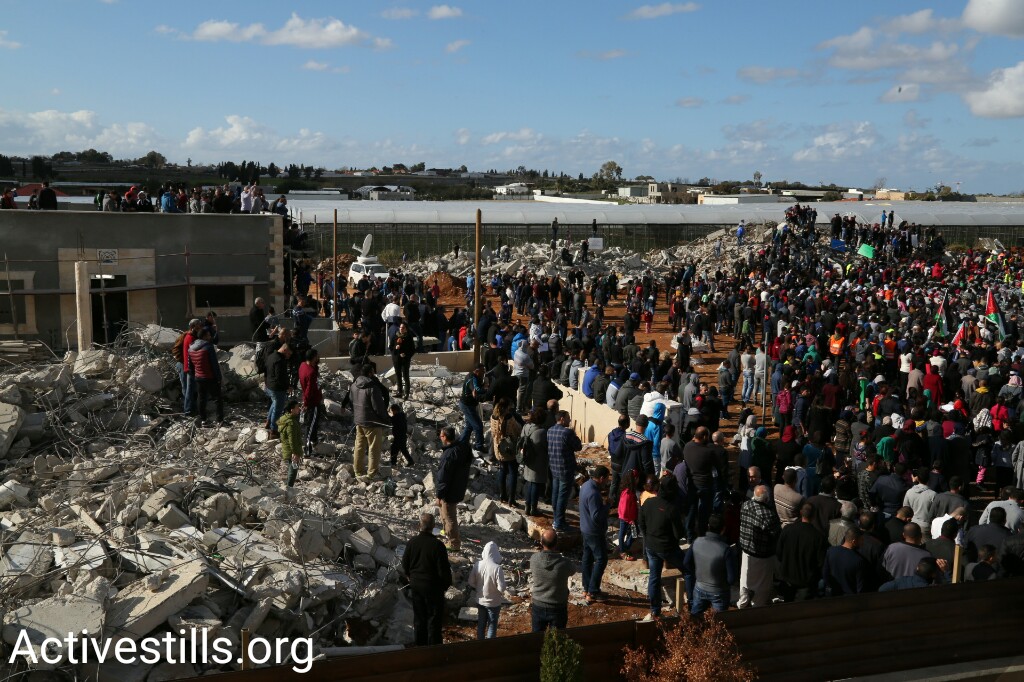 Palestinian citizens of Israel at a mass rally following the demolition of 11 homes in the town of Qalansuwa, central Israel, January 13, 2017. (Keren Manor/Activestills.org)

The Netanyahu government’s high profile demolitions in Qalansuwa and Umm el-Hiran in recent weeks are clear instances of systemic discrimination against the Palestinian minority in Israel, which comprises 20 percent of Israel’s citizenry. What many in Israel conveniently call “illegal construction” is actually the construction of homes on private land owned by individual Palestinian citizens of Israel. State authorities and planning commissions have erected almost insurmountable institutional and planning barriers for Arab citizens seeking construction permits, forcing them to instead build their homes — on their own private property — without the necessary legal documentation.

Since 1948, over 700 new Jewish towns and communities have been established within Israel, while not a single Arab town has been built (with the exception of several townships designed to concentrate the Bedouin population, freeing up their land for Jewish settlement), despite countless promises by the Israeli government over the years. Eligibility for state-subsidized mortgages are largely restricted to discharged soldiers, effectively excluding the 1.7 million Palestinian citizens who do not serve in the army from becoming first-time home owners; local master plans for Arab towns have not been expanded in decades; and national master plans consistently neglect the needs of the growing Palestinian population.

Israeli land, housing and planning policies have long promoted Jewish demographic dominance — referred to by officials as “Judaization” — by expropriating Palestinian land and expanding existing Jewish communities and establishing new ones, all while deliberately inhibiting the expansion of Palestinian towns at a level that meets natural growth rates.

The case of Umm el-Hiran, however, sets a dangerous precedent by legitimizing, for the first time since the Nakba, the eviction of Palestinians and destruction of their communities (within Israel) with the unabashedly declared intention of establishing Jewish communities atop their ruins. The attitude of the state toward its Palestinian citizens embodied in this case not only affirms the fact that rights in Israel of 2017, just like that of 1948, are assigned based on ethnicity, not citizenship — it also compels us to seriously ask whether the Israeli government views Palestinian citizens inside its territory with the same hostility it regards Palestinians in the territories. 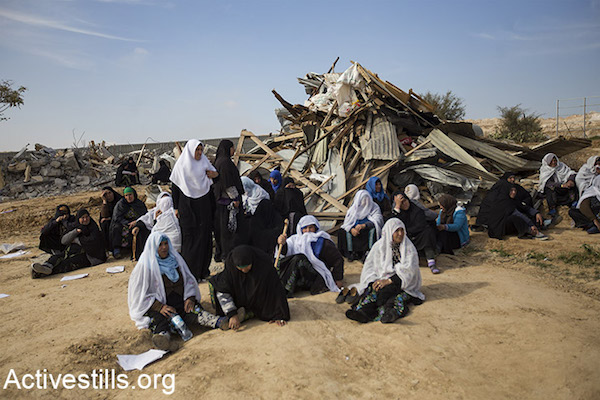 The almost simultaneous occurrence of the Qalansuwa and Umm el-Hiran events on the one hand, and the legislation of the “land-grab law” on the other, demonstrate that to the Israeli government, there is no difference between Palestinian-owned land inside Israel and Palestinian land in the illegally occupied territories: both are equal victims of the colonial expropriation and settlement policies long pursued by the state. For Palestinians inside Israel, Umm el-Hiran is the equivalent of the land-grab law for Palestinians in the West Bank. Both set precedents that not only legitimize land theft in broad daylight, but establish legal mechanisms by which to do so.

Earlier in December 2016, Prime Minister Netanyahu instructed authorities to increase law enforcement pertaining to illegally-built houses in Palestinian towns in Israel, as a twisted compensation for evacuating Amona, an illegal Israeli settlement in the West Bank. The prime minister’s conflation of illegal Israeli settlers and Palestinian citizens is factually misleading and morally indefensible. Qalansuwa is a recognized town within the State of Israel; Amona is an illegal settlement in illegally occupied territories. The owners of the 11 homes in Qalansuwa constructed their houses on land they own; the occupants of the homes in Amona built them on land that is privately owned by Palestinian residents of the West Bank.

The efforts to portray Palestinian citizens in Israel, who are trying to assert their rights as citizens, in the same light as illegal settlers building on land stolen from Palestinians under military occupation, compounded by legislation that makes the theft of private land in the West Bank even easier, is another attempt by an insecure politician to divert attention from the failure of his economic and social policies while scapegoating Palestinians, within and outside Israel.

A genuinely committed, political Arab-Jewish alliance is needed in order to pressure the government to stop its colonial expansion in the West Bank and grant full rights, particularly in areas of land and housing, to Palestinian citizens of Israel. Such an alliance is attainable if Israelis are exposed to the impact of such policies on the ground, policies which can easily lead to a further deterioration in Arab-Jewish relations in Israel. A Jewish alliance with Palestinians is not only an ethical obligation, it is also a civic duty to which the powerful members of society must oblige.

Raied Haj Yahya, from Taybe, is a PhD student at the department of Political Science at the University of Wisconsin-Madison, where he specializes in ethnic minority rights, state-minority relations, and the role of courts in the struggles of minorities for collective rights.